Welcome to the final day of The Escapist‘s Indie Developer Showcase, a 10-day celebration of the designers and programmers who have struck out on their own to make the games they want to make. Each day we’ll feature a new game or demo by an up-and-coming indie developer along with a brief interview. Some games are already commercially available, some are works in progress, but all are free to play. To check out what you’ve missed, click here. Enjoy!

Chris Delay is the Creative Director at Introversion Software, a U.K.-based independent game studio who has released a number of classic games in their eight years of operation. We spoke with him about Introversion’s most recent title, Multiwinia, and what it’s like to develop games in a small shop.

How did you get into game design?

“My background is in software engineering which I studied at Imperial College, London. I’d had some jobs within the games industry but was pretty disillusioned with the direction the industry was taking, the countless sequel cash-ins and monopoly of the publishers was stifling any creativity left. I’d been working on some game ideas during uni and approached some mates to see if they’d be interested in helping me sell them. To my surprise they were and Introversion was founded – that was all the way back in 2001! To date we’ve released four games: Uplink, Darwinia, DEFCON and Multiwinia, and we’re currently working on our first console release with Darwinia+, a package containing Darwinia and Multiwinia that will be out on XBLA this summer.” 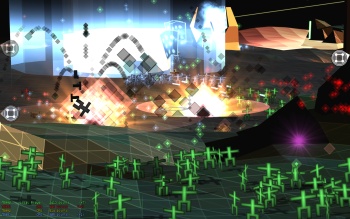 “Not many people know this, but Multiwinia is the game that we had originally intended Darwinia to be. Inspired originally by the Indie Game Jam, the idea was to pitch huge armies of sprites against each other in massive chaotic wars. During the development of Darwinia we struggled to find a way to make this work whilst still being fun, and we decided to concentrate on the single-player campaign side of the game instead. Darwinia won awards at IGF, and as a consequence of that we were approached by Microsoft to put Darwinia on XBLA – the only drawback being they needed a multiplayer component to the game. So we decided to revisit some of our original ideas, and slowly Multiwinia was born. We liked it so much we decided to release it as a stand-alone game on the PC. I know I’m biased, but Multiwinia really is a hell of a lot of fun to play – we learnt a lot from MS about usability in games and I think we really nailed it this time around. Multiwinia is definitely our most accessible and fun game to date. Imagine a beautiful fractal vista, tribes of warring sprites and a whole heap of crazy weapons and power-ups, and you’ve got Multiwinia.”

What’s the most difficult aspect of working at an independent studio?

“It can be frustrating because we are often short on cash and resources – we make most of our cash immediately after a game’s launch, then we gradually spend that cash over the long periods of time between games. So when we project ahead, we are often very low on cash close to the next game release – there is no spare, and everyone on the team is fully allocated and busy. So it makes it very difficult to take up opportunities or do jobs that we really want to do. Sometimes we end up doing things a harder/longer way in an attempt to save cash. It can be tedious because often you know exactly what you should do, but you can’t due to a financial or resource shortage.” 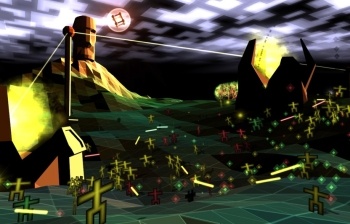 If you could go back five years and give your younger self one piece of advice, what would it be?

We used to be really bad at considering the experience of new players in our games. Darwinia especially had a very bad demo. We just bundled up the third level of the game; we didn’t include any serious tutorial or walkthrough and we barely included a working help system. And we were expecting players to understand the concept of the totally abstract computer world, understand that they had to summon some units to get started and then successfully draw a gesture with their mouse to summon those units. All without help! I think we held a very arrogant opinion that gamers would just catch up with us somehow. But in reality that first Darwinia demo turned a lot of people off the game. Since then, usability has been a huge influence on our decisions, and we’ve always considered the demo to be an extremely important part of a game – it’s people’s first experience after all. With Multiwinia especially, we spent months getting the game interface just right, and the help and feedback systems just right. So my advice to my younger self would be to understand the consequences of bad usability, and therefore to consider usability as one of the most important parts of game design.”

How do you know when a game is finished?

“Often you just run out of time! What tends to happen is a line is drawn in the sand, and a release date is decided. You then work like crazy to sort all the remaining issues in the remaining time. In reality you never get everything into the game that you wanted. We normally keep working on our games after launch, and all of our games have a couple of major patches – which usually include new gameplay, new features etc. So in that sense, our games are never finished – they are simply released!”

What games did you enjoy playing in 2008?

“The last quarter of 2008 was insane for new games. We had an incredible run of amazing games, one after another – I had trouble fitting everything in! I loved Left 4 Dead and still play that regularly on the hardest mode – I think it’s the most satisfying and enjoyable co-op game of the year. I had an incredible time in Fallout 3, and the size and scope of that world just blew me away. It was also a great year of indie games, with Braid and World of Goo both showing the quality and polish and creativity that you can now expect from indie titles. And finally, perhaps slightly disappointingly, I’m still in love with World of Warcraft, and my Death Knight is now my favorite character. It’s quite amazing looking at the difference in quality between the original content, the outland Burning Crusade content and the newest Death Knight starting zones from Lich King. (I haven’t made it as far as Northrend yet, sadly). Blizzard are getting better and better at making WoW content, and I personally think I’ll be playing this game for most of 2009 as well.”

What inspires you outside of gaming?

“Movies are the biggest source of inspiration for me, and that’s always been the case since I was very young. I’ve always loved movies and try to get to the cinema as often as I can, and I’ve got quite a serious DVD collection at home now. Many of our best game ideas are inspired my movies – some more obviously than others!”