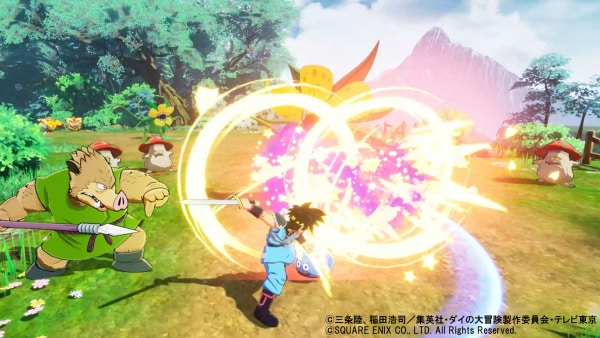 Square Enix and several different game studios have teamed up to create new projects around the Dragon Quest: The Adventure of Dai series. The project will include three games — action RPG Infinity Strash, mobile title Tamashii no Kizuna, and card battler Xross Blade — in addition to a new anime.

Infinity Strash – Dragon Quest: The Adventure of Dai (below) will release on unspecified consoles and is being developed by Game Studio. The game is an action RPG and will release in Japan in 2021. Players will use familiar characters and familiar magic to battle a variety of enemies.

Square Enix has partnered with developer DeNa for Dragon Quest: The Adventure of Dai – Tamashii no Kizuna (Bonds of Souls), a mobile game for iOS and Android. It looks to involve some sort of on-rails action RPG gameplay with three-lane combat and will release in Japan in 2021. It will be simpler than Infinity Strash but still offer depth.

Dragon Quest: The Adventure of Dai – Xross Blade will be developed by Takara Tomy A.R.T.S and is an arcade game that uses physical cards. The game will focus on card battles, and separate merchandise is planned to release alongside it. Xross will launch in Japan on arcades this fall.

Alongside these three games in the Dragon Quest: The Adventure of Dai series, an accompanying anime (below) will air in October. Toei Animation will be handling the production. Of these various projects, no statements have been made about international release yet, but Infinity Strash seems the most likely candidate for localization.