In my last XP – and I apologise if this column is starting to turn into a serialized ramble – I mentioned that video game narrative has long been on the wrong path by trying to emulate movie storytelling, rather than using methods that play off the strengths of an interactive narrative. Now I’d like to examine what those methods are, in the wake of Doom. I keep thinking that should be written as DOOM, and pronounced like you’re a Roman soothsayer accosting Caesar about the ides of March. 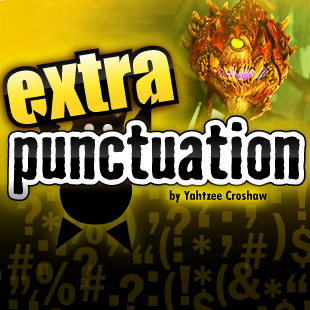 What I mean when I talk about movie-style storytelling is, being reliant on cutscenes to get the story across. Cutscenes, scripted conversations and predetermined action gameplay sequences that will end abruptly with the main character’s death if the player does anything but press forward, or whatever button corresponds to ‘forward’ at the time. Games that take this tack in deliberate pursuit of the ‘cinematic’ thing almost always do so at the expense of gameplay.

Most recently there’s Uncharted 4, Quantum Break, and to go back to the classic example, The Last Of Us. Games that placed a very great emphasis on cinematic storytelling, but when it came to figuring out the game part, they shrugged their shoulders and made them generic third-person cover shooters, the white noise of triple-A. Talk all you want about how the characters and plot engaged you, but scoring as they do a big fat zero on the ‘exploring the interactive space’ front, maybe they should have been films after all. This isn’t even bringing up Until Dawn, which is a game where the gameplay is literally finding the next cutscene.

I bring this topic up in the wake of DOOOM because DOOOOM does have a plot, but it’s courteous enough to not get in the way of things, and by ‘things’ I mean rampant constant death battles with hell monsters. It’s very much a game that front-loads the combat challenges and level exploration. But at the same time, the story is quite deep. It’s just all going on in a train parallel to the one we’re riding on, and we merely glimpse it every now and again through the windows. This works pretty well for what DOOOOOM is trying to do because it establishes the player character as someone who doesn’t give a flake of dried Marmite for the larger context, and only cares about ridding the planet of demons. Which is hopefully representative of the player’s motivation.

To take control away to focus on a story through cutscenes is to make the presumption that the player gives a toss, and that may be a dangerous gamble to make. The one thing that DOOOOOOM knows for certain about its audience, from the fact that they bought the game, is that they like shooting all the demons. So that’s the baseline experience the game offers, and you’re perfectly entitled to leave it at that. Maybe go into the included level creator and make a room full of a million demons to shoot. Grind up some in-game currency to buy emotes no-one else will ever notice or care about.

But DOOOOOOOM does actually have a detailed story that can be discovered by reading the in-game database, and the profiles of monsters, environments, weapons and what few NPCs exist. All of which contain many snacky world building titbits that could potentially add a greater significance to our hero’s actions after he puts his coffee down and gets back in the fight. Which rather brings to mind Dark Souls‘ trademark style of deep narrative, told through little nuggets in item descriptions and cryptic conversations, while the exploration and combat are all that you see on the surface.

Lately I’ve been wondering if the zero-exposition, optional-reading approach might be ‘interactive narrative’ in the truest sense.

Overwatch does a similar thing, where all plot and exposition is on the back burner so all context resides in the actions and visual personalities of the characters. Which is no new thing, as Overwatch‘s primary inspiration Team Fortress 2 did it, and so did every 1v1 fighting game since Street Fighter 2. A necessity of the format for a multiplayer game, perhaps, but I’ve always faintly admired the purity of it.

And lately I’ve been wondering if the zero-exposition, optional-reading approach might be ‘interactive narrative’ in the truest sense. Not the Quantum Break interpretation: a rigid, tightly controlled choose-your-own-adventure book. Nor is it the Fallout/Mass Effect thing of having us define ourselves through stiff-backed blank-eyed conversation menus. Nor even the Half-Life method of pouring exposition out for us to listen to while we freely hop around the room smashing wooden objects. Maybe we’ve long been making the mistake of thinking ‘interactive narrative’ means having the (real or imagined) ability to influence and redirect the narrative to our preferred state, when what it’s actually about is being able to choose our own level of investment in the plot?

A film-style narrative presents a story as a long sequence of buildup that pays off with little returns along the way and explodes into a climax at the end. It’s like a mountain, a broad situation that tapers to a cathartic conclusion at the top. In contrast, the zero-exposition Dark Souls / DOOOOOOOOM style of narrative is, on the surface, all climax. It’s more like a rabbit hole. The cathartic part happens right away when the rabbits come out and we get to play with them and laugh at the ones that are fucking. Then, if we feel like it, we can go down the rabbit hole and see where all these damn rabbits are coming from.

And these two approaches suit the different reasons that audiences buy into the two different mediums. A filmgoer wants to unwind with a satisfactory story, and time must be spent acquiring their investment by letting them get to know the characters and situations before the climax will satisfy. A gamer, meanwhile, wants a challenge, and they automatically have investment because they want to beat the challenge. Scraps of context along the way may enhance that investment but it may also be reduced if context is forced in at the expense of challenge. The incompatability between filmic narrative and challenge is something that video games have been fruitlessly butting against for decades.

As always, I aspire to spark debate, not to prescribe that story-based video games must now universally abandon cinematic narrative in favour of the hands-off approach. Not that anyone would, I mean, without cutscenes, they’d have nothing to put in the hype trailers. Assholes.