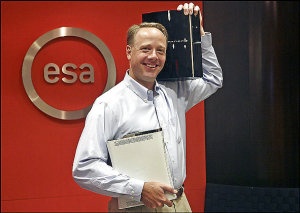 The recent decision by Activision and Vivendi to halt their membership in the Entertainment Software Association is widely viewed as a resounding blow to the videogame publishers’ trade association. The loss of two of its largest members – who would soon have become its single largest member – will likely cause ripple effects with far-reaching and potentially damaging consequences to the ESA and the industry at large. But in matters such as these, there are typically many more questions than answers, not least of which is why anyone should care about the ESA in the first place.

Originally founded by Doug Lowenstein in 1994 as the Interactive Digital Software Association, the industry group changed its name to the more familiar Entertainment Software Association in July 2003. Created to serve “the business and public affairs needs of companies that publish video and computer games for consoles, personal computers and the internet,” the ESA represents the interests of videogame publishers and, by extension, gamers to the powers that be in Washington. (The Entertainment Software Association of Canada, an affiliated organization, handles similar responsibilities for the Great White North.) The January announcement of a new political action committee dedicated to supporting industry-friendly politicians, described by ESA President Michael Gallagher as “an important step in the political maturation process of the industry,” highlights the continued and growing importance of political credibility and influence on the industry’s part, despite the relatively low profile of such efforts in the eyes of the average gamer.

Of much greater visibility on the political front is the Video Game Voters Network, an ESA project established in 2006. The VGVN seeks to give gamers a more direct voice in the political arena, allowing them to express support for First Amendment protections of videogames, stay abreast of game-related political happenings across the U.S. and demonstrate the “strength in numbers” of the voting-age gamer demographic. Representing a new kind of grass-roots political movement, the VGVN helps keep gamers apprised of political efforts against the industry by monitoring federal and state legislatures and providing links to petitions and email campaigns that oppose such actions.

The ESA is also active in anti-piracy efforts, educational initiatives, consumer research and other areas; but its most obvious and influential impact on the videogame industry came through the creation of the Entertainment Software Rating Board, the agency responsible for monitoring and rating the content of virtually every videogame released in North America. Established in 1994 under pressure from the U.S. government, the ESRB has superseded all other classification systems put forth by various segments of the industry. The organization has rated thousands of titles from hundreds of publishers and repeatedly proven itself an effective and valuable tool for parents seeking guidance about appropriate content for their kids.

In short, the ESA has been a tremendously positive force for the industry, bringing cultural legitimacy and political clout to what was not so long ago a marginal, even oddball hobby. But the withdrawal of Activision and Vivendi from the organization, followed by reports that as many as four other industry majors would be withdrawing from this year’s E3, has led to speculation that all may not be well between the ESA and the industry it represents.

Launched in 1995, the Electronic Entertainment Expo, now known as the E3 Business and Media Summit, is the ESA’s annual industry trade show, featuring game previews, product demonstrations and presentations from a wide array of industry figures. Ostensibly a press event, E3 quickly grew into a sprawling orgy of lights, noise and booth babes as the industry flexed its muscles for the public. But after attracting over 70,000 people in 2005, the ESA elected to cut back on the show’s excesses, making it invitation-only for a select number of press representatives. With attendance estimated at 3000 to 5000 visitors, E3 in 2007 was a much more subdued and business-like affair. But some attendees and exhibitors expressed disappointment with the new format, saying it failed to capture the attention and imagination of the gaming public.

The crux of the complaints appear to focus on the association’s current president, Michael Gallagher, who replaced Lowenstein in May 2007. Soon after the Activision-Vivendi announcement, Kotaku reported on “several (anonymous) industry sources” who said Gallagher’s leadership of the ESA was at least partly to blame for the problems surrounding this year’s E3; Wedbush Morgan analyst Michael Pachter put it more bluntly, criticizing Gallagher for failing to take a more visible and proactive stance as ESA president and describing him as “far less knowledgeable and sophisticated about this industry than Doug was.” Pacther suggested he would be prone to “rookie mistakes,” and then quickly went even further, adding, “I criticize (Gallagher’s) lack of drive to learn about the industry.”

For its part, the ESA appears to be downplaying the defection, commenting only via the following statement from Rich Taylor, Senior Vice President of Communications and Research: “While the Entertainment Software Association remains the preeminent voice for U.S. computer and video game publishers, we can confirm that Activision and Vivendi Games opted to discontinue their membership. The ESA remains dedicated to advancing our industry’s objectives such as protecting intellectual property, preserving First Amendment rights, and fostering a beneficial environment for the entire industry. Our high level of service and value to members and the larger industry remains unchanged.”

But there may be more concern behind that bland catch-all than the ESA is letting on. For one thing, as two of the larger members of the ESA stable, Activision and Vivendi presumably would have provided significant sources of revenue to the group. Even more threatening is the potential loss of credibility for the ESA and the impact Activision’s absence will have on other publishers, who may find themselves re-examining their own ties with the organization.

It’s possible that Activision’s desire for more direct control over events like E3 led to a conflict with ESA management that ultimately proved easier to abandon than to fix, but the situation is unlikely to be that simple. Walking away from a long-standing industry group like the ESA is not something done lightly, even for a heavyweight like Activision. In light of the news that other industry majors are also dropping out of E3, it leaves the impression that the ESA is standing on some rather shaky ground.

This could be very bad news for gamers. An imploded ESA, without a suitable replacement waiting in the wings, leaves the industry without any form of organized political influence in Washington. With anti-videogame hysteria swirling around releases like Grand Theft Auto IV and Bully while the general public is subjected to a steady stream of misinformation about the addictive and destructive potential of the medium, the lack of a unified voice speaking for the industry could be devastating.

But one piece of good news in all this is that the ESRB will remain unaffected. A move away from the well-established system could open the door to more concerted efforts to introduce legislative restrictions against games, but Eliot Mizrachi of the ESRB confirmed that game ratings are not contingent upon ESA membership, and that no extra fees or processes are required of non-members who submit their games to be rated. Activision and Vivendi’s use of the rating system should continue unchanged.

You can find some degree of comfort in the fact that Activision did not become the gaming behemoth it is today by making careless or reckless business decisions. Numerous theories abound: Some observers think Activision wants to start its own trade show, something more akin to the E3 of old rather than the stodgy new format, while others have suggested this is simply an attention-whoring prelude to Activision-Blizzard’s entry into the club. Or, as Pachter suggested, the company may simply believe the ESA has become ineffectual.

Regardless of the reason, it’s a safe bet that Activision isn’t going to act in a manner overtly detrimental to itself or the videogame industry. Predicting beyond that gets trickier. Pulling out of E3 is one thing, but an out-of-the-blue withdrawal is a whole ‘nother ballgame. This, as they say, is where it starts to get interesting.