Part of me would like to say that The Internship, the new Vince Vaughn/Owen Wilson vehicle opening wide in the U.S. today, is the worst excuse for an alleged comedy I can remember seeing in a movie theater. However, try as I might, I cannot forget that I saw Wild Hogs and I Hope They Serve Beer In Hell in movie theaters, so The Internship will have to settle for being the worst comedy not involving Tucker Max or Martin Lawrence that I can remember.

If you’ve managed to miss the ubiquitous trailers, the film’s premise is as follows: The onetime Wedding Crashers (the film doesn’t even try to pretend that these are not the exact same characters with new names) are a pair of fast-talking designer wristwatch salesmen who have been rendered obsolete by technology (“Nobody has a watch, they just look at their phones LOL!”) and find themselves middle-aged and directionless. With options dwindling, Vaughn’s character hits on an inspiration. He’ll register both of them in the Google Inc. Internship program, an intense summer immersion test that might result in jobs with the prestigious tech giant… if they can overcome their “hilarious” older-man computer-illiteracy, that is.

The intern program is structured like a reality TV show, wherein the various “Noogles” are broken up into teams. Since nobody wants to be brought down by the “old guys,” they wind up with a team of fellow rejects who none the less manage to embody every stereotype Hollywood screenwriters assume their audience still associates with the tech sector. There’s the Wallflower Emo Kid, Shy-But-Secretly-Nymphomaniacal Geek Girl, Self-Punishing Asian Man With Mommy Issues and the Super Awkward King Dweeb. Will they put aside their differences, work together and implausibly become Google’s top recruits?!

Wait… what’s that? You’re wondering where the jokes are? The humor, maybe? You don’t find the idea of two classically-likable old-school business bros getting dropped into the weird, wild and waaaaaaacky world of a modern technology company automatically funny? You’re not already doubled-over thinking about them making references to 80s and 90s pop-culture to the bewilderment of their college-aged fellow interns? You’re not excited to see how they’ll overcome their limitations and prove that they’re still useful after all? You’re not curious to see which funnier comic actors will get drafted for wacky supporting roles (Rob Riggle, Will Ferrell and Aasif Maandvi, for the record)?

Well, then you already see my problem. 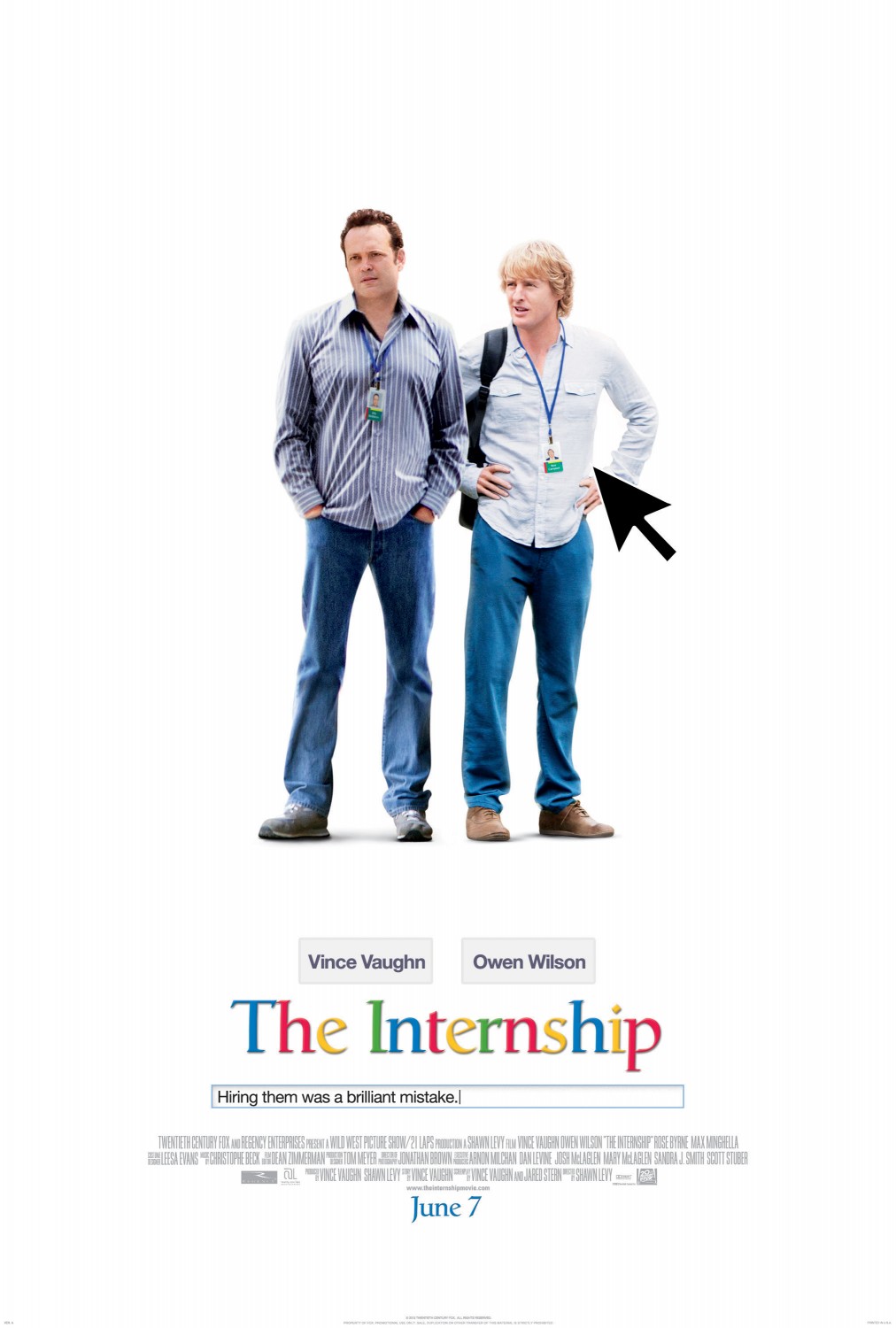 This might be the most lazily constructed movie featuring “name” actors you’ll see all year, re-using an “underdogs competing for a spot” template that was old when they were still inventing new metaphors for how old something was. The Internship has grounded its character’s interplay in a layman’s conception of the tech industry that is so archaic and backward looking, I wouldn’t be surprised to learn that the screenplay was written around 1998 and they simply swapped out “AOL” with “Google.” Every scene that isn’t built on lazy slapstick or maudlin “Aww, gettin’ old is tough!” sentiment is built on the following dichotomy: “Tech geeks,” according to the film’s pre-millenial understanding of its world, are socially stifled introverts who can code in their sleep, while our heroes have nothing but super-charged social skills even if they think C++ is a vitamin supplement. Ho ho! The irony!

It’s genuinely strange to imagine that someone thought – in a time of economic turmoil and massive unemployment – audiences were going to be swept up in the alleged plight of two guys who simply weren’t sharp enough to see their own gravy train approaching a wall, and now face the horrifying prospect of slightly-less-glamorous lifestyles (Oh no! Owen Wilson might have to do a boring job! Egads! Foreclosure!? Vince Vaughn might have to get an apartment!). At one point, the younger team members attempt to interject some of this unwanted reality (“The American Dream” is broken, Generation Y has staggeringly low career prospects, etc.) when Vaughn tries to give them the “whole lives ahead of you” speech… which Our Heroes rebut by taking everyone to a raucous strip club which of course brings everyone out of their shells and turns them into buddies for life.

The most bizarre thing about the film itself, though, is its Google-centric setting. On the one hand, I tend to like it when real brands get used in movies instead of unlicensed sound-alike stand-ins for the sake of immersion, but The Internship treats Google with reverence usually only shown to companies operated by Willy Wonka. One would think a comedy would try to mine laughs from the absurdities that The Public assumes goes on behind the doors of internet cash factories, but here’s a film that buys into the Google mythology completely and utterly. Google’s “sunshine and rainbows” projected image is present as wholly true – this isn’t just the best place in the world to work, but it’s memetic eccentricities are all super sound ideas that Vaughn and Wilson have to learn to appreciate and its lofty sounding info-democratizing ideology really is the philosophy that can save the world. Joining Team Google is a journey to The Emerald City where there is no Man Behind The Curtain – The Wizard is real.

But even beyond the uninspired premise and the borderline offensive corporate cheerleading (to call this an infomercial for Google would besmirch the good name of infomercials); The Internship simply isn’t funny. Joke after joke lands with a thud, and the “sitcom misunderstanding” setups were physically painful to endure watching unfold. At one point, Our Heroes are pranked by being sent on a snipe hunt to seek help from “a bald professor in a wheelchair named Charles Xavier;” a premise that assume A.) The audience still considers the billion-dollar X-Men franchise to be a geeks-only reference, B.) that Our Heroes haven’t been to a movie theater or watched television since 1999 or so, and C.) that it will be amusing to watch Vince Vaughn verbally harass a random old man in a wheelchair.

When the credits finally rolled on this thing, my very first words to my fellow critics were ,”That was so bad, I think I’ll switch to Bing.” My last words to you on the matter? Just don’t go.