I honestly searched around for an hour or so looking for some way to tie this particular subject to something also having to do with recent movies… and came up mostly blank. So, yeah – this week I guess we’re talking about videogames.

If you’re not aware of the myriad comings and goings of the gaming scene (given the general focus of the site where this column runs that’s a bit unlikely, but still) this week’s big angry word generator was The Sorceress, a character in the long-hyped upcoming Vanillaware brawler Dragon’s Crown. If you’ve seen the pictures or the video, then you already know what the big brouhaha is. The game’s design aesthetic is grounded in manga-flavored exaggerations of Frazetta/Vallejo-style High Fantasy art, and The Sorceress is its variant on the Voluptuous Magic User type: Implausibly thin waist, structurally impossible legs and comically oversized breasts.

Images of her (and the rest of Crown‘s similarly preposterous crew) have been on the web for well over a year now, but it seems like it took the first trailer exclusively focused on The Sorceress in motion – breasts flailing independently of one another like peach-colored gelatin desserts, voice cooing in the tone and meter of a Tokyo phone sex operator – that finally set off the “Oh, come ON!” alarm across the interweb. Since roughly 8 in 10 of all currently simmering issues in gaming lately have concerned the juxtaposition of the words “female” and “representation,” those thus inclined were more than ready to weigh in with the expected complaints (“This is juvenile!” “Exploitation!” “Industry sexism!”) while their opposite numbers mounted similarly reflexive counterpoints (“Feminazis!” “First Ammendment!” “Misandry!”).

Things got a little more animated when Kotaku‘s Jason Schreier took what could be described as a somewhat childish shot at the design, offering that “As you can see, The Sorceress was designed by a 14 year-old boy.” George Kamitani, the game’s art director (and president of Vanillaware), took some offense to this characterization and tossed a drawing (presumably also from or related to the game) of three burly, bearded men onto his Facebook with a caption implying that this might be closer to his detractor’s liking. Haw haw.

Look… on the business and cultural sides of this, there’s not really much new to see here. The games industry is in a difficult moment of transition where the monolithic singularity of vision and direction (read: that of heterosexual men) of gaming’s creators and audience has begun to splinter just enough for dissenting voices to be heard but not quite enough to make a dent in such things in pre-production. That kind of situation leads to shouting. Always has, always will. I don’t have much to add to that beyond the observation that it’s possible that three relevant statements such as “This is what makes people take our medium less seriously,” “This is part of what makes gaming-culture inhospitable to women” and “I have the right to either create and/or enjoy this” can, in fact, be simultaneously correct.

I tend to live on two sides of blowups like this. That’s not unfamiliar territory for me, being that I’m jointly an artist and a professional critic of other people’s art, but it can be disconcerting all the same in a media culture where one is expected to be either wholly against something, wholly for something, or standing on the sidelines unconcerned over whatever is being contested. On the one hand, I’m a feminist, an out-and-proud “social progressive” in the parlance of American politics and a full-bore proponent of knocking down, busting up and sweeping away the white/western/heterosexual/cisgendered/male power structure not just in gaming but in everything, so of course I’m sympathetic to those who looked at The Sorceress and saw just one more neon-lit “No Girls Allowed!” sign going up in the window of the Game Culture Treehouse. I get it. I know where they’re coming from – or, rather, I understand where they’re coming from as best I’m able. 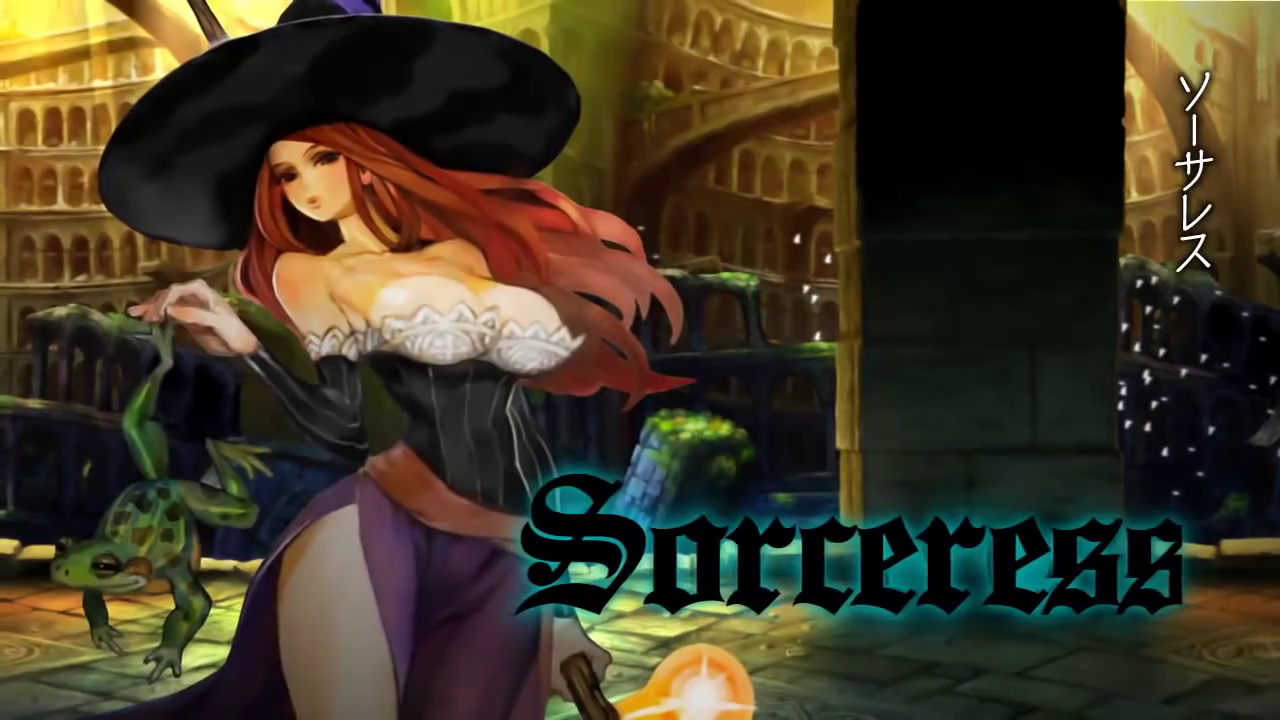 On the other hand… well, how best to put this? I’m a bit of a pig. Above all else, a man needs to be honest about himself, and my self is pretty much the target for this type of “Female Perfection as Imagined by Over-Imaginative Pubescent Schoolboy” character design – not my only hang-up, by any means, but certainly on The List. I am a red-blooded, All-American, Hooters-patronizing, Baywatch-nostalgic connoisseur of sleaze and debauchery. So not only do I get the aesthetic wellspring from whence The Sorceress seems to have leaped, I actually find her design rather pretty – as cartoons go, at least. And those who know me can, hopefully, can attest that in spite of this I’m rather far removed from the basement-dwelling, socially inept, casual misogynist that this outlook is alleged to only be shared by.

In other words, I find myself being able to agree on the point of the omnipresence of this character type (the only remarkable thing about The Sorceress is how un-remarkable she is in a medium that also gave us Soul Calibur, Dead or Alive and pre-reboot Lara Croft) being problematic… while also being if not sympathetic at least empathetic to the desire to have such characters in games in the first place. What you find aesthetically pleasing is what you find aesthetically pleasing, and I don’t necessarily subscribe to the idea that enjoying something that someone else finds offensive or diminishing makes me guilty by association of said diminishment any more than your offense is made illegitimate by virtue of nobody “intending” you to be offended. And there isn’t a way out of that conundrum other than accepting that it is a conundrum.

There is no easy answer here. No fix-all that permanently stabilizes the situation. So long as the same basic human right of free speech holds one individual’s ability to say something and another individual’s ability to voice displeasure at what the first said as equally protected, there will always be these arguments. Always.

Oh, it’ll get better. Diversity – that so often mocked of modern societal goals – will make such dust-ups far less common. More and more games being made by people other than heterosexual men for a gaming audience that grows similarly diverse will mean less feelings of marginalization. The problem isn’t, and has never been, that The Sorceress (or Ivy, or Cammy, or Lara, or Daphne, or whomever else) look like they do… it’s that everything looks like they do. A diversified industry and consumer base – no matter what nonsense about “lowest common denominators” may be spewed to the contrary by the troglodytic denizens of the deeper web – will render these battles less frequent, but never nonexistent. There will always be someone who finds something offensive, and their opinion will seldom be entirely without merit.

I get the sense that, on all sides of these fracases, the eternity of these discussions isn’t fully fathomed. The discussions, once public, inevitably come to be dominated not by those arguing one side or the other but by those wearily begging to know when we can “just get back to talking about games.” Too many, in my estimation, seem to approach controversies in gaming (or anywhere in “geek media,” really) through the prism of a version of the Eden Fallacy; believing that some perfect conflict free space not only existed at some point but is in fact the natural order of the world, thus leading them to see debates and discussions of this nature within gaming as unwelcome deviations to be solved and put to rest rather than part of an evolving, ongoing communication. “Please, oh please; just tell us what has to happen for both of you to shut up about sexism or bigotry or all this other stuff so we can get back to figuring out whether Quick Man can outrun Sonic!”

But there is no end to this, and I feel like a lack of understanding (or even considering that) is what muddies the waters in these moments. It’s hard enough to have a proper conversation about anything when both sides are being shouted at to force themselves into some kind of untenable compromise by people who think the whole thing just needs to go away. It doesn’t, and it can’t. Certain things will never line up, will always be in opposition and will always spur new arguments. That’s not disruptive or distracting – it’s natural.