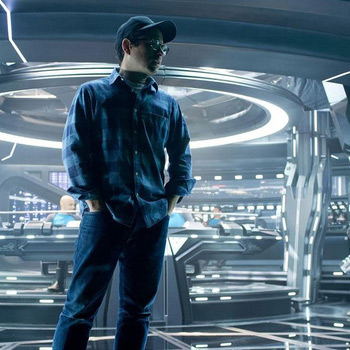 J.J. Abrams is vacating the captain’s chair, but he’s not abandoning the Star Trek franchise.

When J.J. Abrams decided to take over the director’s chair for Star Wars: Episode VII, most of us just assumed that his tenure with the Star Trek franchise had been placed on an indefinite hiatus. Although an official announcement has not yet been made, a recent interview with the director has confirmed our suspicions: J.J. Abrams will not be directing the next Star Trek movie.

Yesterday, Mr. Abrams and Simon Pegg sat down with Collider to promote the Blu-ray/DVD release of Star Trek Into Darkness, and when the conversation turned to sequels, Abrams was quick to point out that he wouldn’t be leaving the franchise entirely.

“It’s a little bittersweet,” he said. “But, I will say that I’m going to be producing the movie. Whomever it is that directs the film will be someone we all know is going to keep the cast and crew in good hands.”

In a separate interview with HitFix, Abrams mentioned Rupert Wyatt as a possible replacement. Wyatt’s resume includes Rise of the Planet of the Apes and a 2008 film called The Escapist, so we obviously dig his work.

“He’s incredibly talented,” Abrams said, “and we’d be lucky to have someone as talented as Rupert. But there are things we’re focusing on right now before the director, which is just sort of the fundamentals of where the story is gonna go.”

Wyatt’s name isn’t the only one being tossed into the hat, though, and it’ll definitely be interesting to see how the process unfolds. But I, for one, am happy to see that Mr. Abrams and Paramount Pictures are concentrating on the storyline before worrying about who’s going to sit in the director’s chair.