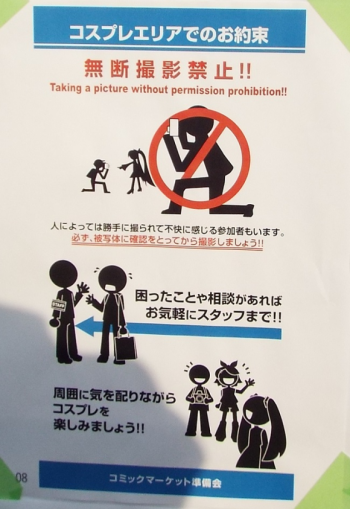 Comiket keeps creepy photographers away and asks that they always ask for permission to take someone’s photo.

Last weekend, a large event in Japan known as Comiket – or Comic Market – enforced rules for cosplay and photography to keep cosplayers safe and advise photographers to be polite. Taking pictures at a low angle, or upskirt photos, is expressly forbidden.

Comiket also states photographers shouldn’t be a “nuisance” when taking photos. This means photographers should politely ask for permission to take someone’s photo and to avoid taking pictures of the same person for too long. Doing so starts to wade into creepy territory. Not to mention, Comiket asks photographers not to crowd around cosplayers.

This year, the Cosplay is Not Consent movement has grown in the United States since 2013. Signs at New York Comic Con in October were emblazoned with the white and red letters of “Cosplay Is Not Consent” and asked attendees to keep their hands to themselves and to ask before taking a picture as well as respecting people’s right to refuse.

Cosplay Is Not Consent states just because someone is cosplaying it does not give anyone permission to touch them or take their picture. Geeks for CONsent, founded by former team members of HollabackPHILLY, collects stories of harassment at conventions and campaigns for conventions to enforce anti-harassment policies.

At Comiket, the new rule banning upskirt photos seems to have been followed, according to RocketNews24, which attended the event last weekend. While there is not a Cosplay is Not Consent movement in Japan, some events do advise photographers on proper behavior. Comiket reminded cosplayers to find staff members for help if they are uncomfortable.

An entirely different rule at Comiket for cosplayers specifically prohibits arriving or leaving the event in costume. This rule is much more common in Japan. Cosplayers register for Comiket and pay a small registration fee. They change in a dedicated area and have their picture taken in the cosplay area, but they are of course welcome to walk around Comiket in costume otherwise.