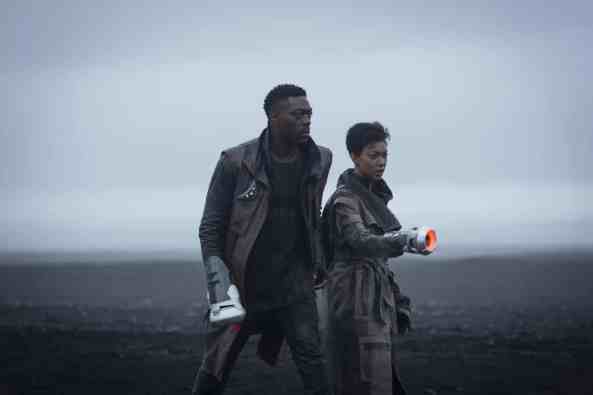 The second season of Star Trek: Discovery ended with a major change for the crew of the U.S.S. Discovery as they were hurtled 930 years into the future of the Star Trek universe. It won’t just be the time period of the show changing, however. Jonathan Frakes, Commander Riker from The Next Generation and regular director of Star Trek film and television, has revealed that the show’s tone will be drastically changing as well:

Michael Burnham has found a new core, not to mention a new partner in crime. So again, there’s a big tonal shift on that show, less driven by the pain and guilt of her past and more about the magical reunification of the Discovery crew and wherever she went off to. God knows where she went as the Red Angel. So those two things coming back together is very much the theme, and how grateful everyone is and what’s next. It’s got a lot of action-adventure and not so much pain.

Tonally, the first two seasons of Star Trek: Discovery were definitely tragic, with Michael overcoming some serious loss and a plethora of family issues that included Spock and a time-traveling parent. Still, relative to more traditional Star Trek shows, Discovery is already an action adventure series. This third season, according to Frakes, is going to be even more of that with the plot initially focusing on Michael trying to get back to the rest of the crew, and then the crew trying to figure out what to do now that they’re stuck in the future.

The launch to a period of time we’ve never seen in Star Trek does give the show a lot more creative freedom (not to mention avoiding the The Original Series uniforms). The first two seasons spent a lot of time referencing and interconnecting with the original show, but by launching so far into the future the show’s creators now have carte blanche to develop Star Trek as they see fit; whether that’s a good thing is yet to be determined.

Star Trek: Discovery did finish filming in February before the coronavirus shut everything down, and post-production is now occurring. Star Trek: Discovery‘s third season does not have a release date. CBS All Access is also working on multiple other Trek spin-offs and the second season of Star Trek: Picard.