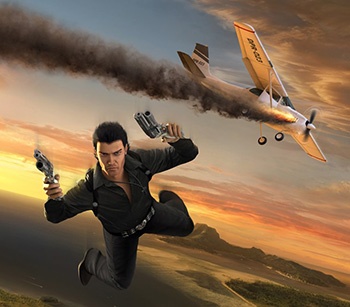 The producer responsible for the Hitman and Kane and Lynch movies is trying his hand at adapting another Eidos franchise: Avalanche Studios’ over-the-top action-fest Just Cause.

Adrian Askarieh, the producer who put together the Hitman movie and the upcoming Kane and Lynch adaptation, has obtained the rights for a Just Cause flick and is currently getting the project together.

Though Hitman and Kane and Lynch were big studio movies, don’t expect exactly the same kind of product with Just Cause. For Askarieh, Just Cause will be an independent project. That doesn’t mean he’s going to make some artsy flick about a super agent getting over his girlfriend dumping him while overthrowing a military regime. It just means Askarieh’s playing this one close to the chest.

“Hitman was a very successful movie for Fox, and I wanted to find a similar project in terms of its genre, international appeal and ability to do for a price, but do it independently in order to maximize the creative and financial upside that a project like this could generate,” Askarieh told Variety.

He’s currently working on the movie with the Creative Artists Agency and wants $30 million in funding for the project. Considering it’s still in such early stages of developments, don’t expect the film to hit theaters (if it does) to coincide with Just Cause 2 next spring.

I think it could work, but then again a movie where things explode and people do basejumping sounds like a just plain great idea to me.

So then, I guess it’s time to do that thing we always do and start arguing over who would be the best person to play the main character, Rico. Antonio Banderas would be the obvious pick, and a Just Cause movie would be a cool throwback to his El Mariachi/Desperado/Once Upon a Time in Mexico days, but I’m going to say it should be Billy Dee Williams. Don’t ask me why, it’s just a feeling.

How Much Money Does Bobby Kotick Make?