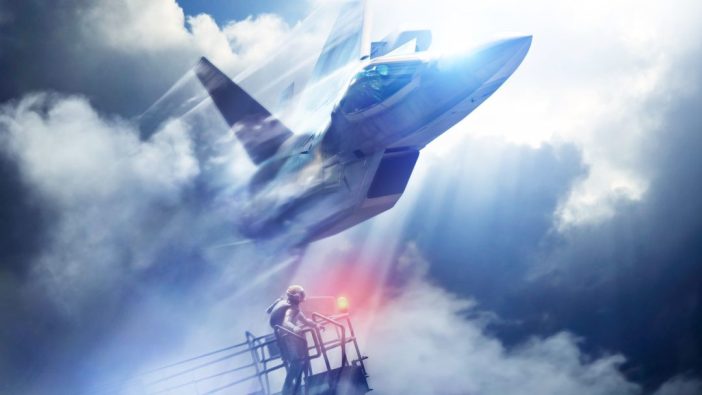 When Ace Combat 7: Skies Unknown was announced in 2015, something inside me unclenched. I’m not a flight simulator or dog fighting fanatic by any stretch. There’s just something about tumbling through the air, making slow arcs through the sky as I try to get a bead on other planes darting in and out of sight, that makes my brain feel like I’m doing something wrong. If I were in the Death Star trench, I’d be the guy shouting, “Yeah cool about the targeting system, Red Leader, but is there something else I’m supposed to be doing? I’m pretty sure I’m forgetting something …” Boom. Explosion. Ice Man, Maverick, and Goose would not invite me to volleyball practice. But the Ace Combat series has always felt like a fundamental part of video games to me. Its technical prowess, arcade immediacy, and commitment to storytelling seemed like a stabilizing force in a big budget gaming landscape whose range of subjects and settings continues to contract year after year.

The first numbered entry in 12 years, Ace Combat 7 feels deeply modern but also perfectly of a piece with its PlayStation and PlayStation 2-era predecessors. Did I still feel like I was doing something the wrong way as I piloted my F-16C into a shockingly realistic stormhead over rough seas? Big time. But I was also able to immediately settle back into the game’s smooth controls. Even the PlayStation VR-exclusive missions felt natural if nausea-inducing for a casual VR fan like myself. The melodramatic staging also made me feel right at home. In Ace Combat 7 you play as a crack pilot wrongly accused of murder in the middle of a desperate war between fictional military superpowers. That’s just the beginning of the game. This is, I’m happy to say, the title that felt missing from video games.

“To create a new numbered Ace Combat title, it would be necessary to have elements of innovation beyond the last title, and those elements must also deliver higher satisfaction levels over previous titles in the series,” producer Kazutoki Kono told me via email. While he didn’t create the series, Kono’s been the guiding hand behind Ace Combat since he worked as a graphics artist on Ace Combat 2 for PS1. If anyone is the human face of the series’ consistent presence, it’s him. I asked Kono why the series was finally coming back after years of botched free-to-play experiments and spin-offs trying to turn the brand into something else. What’s actually changed between now and Ace Combat 6 to warrant the implicit declaration in a numbered sequel?

“The philosophy behind the presentation of flight in Ace Combat games has always been to ‘simulate’ the real fight experience through simple and intuitive controls,” he said. “This philosophy cannot be changed drastically, so where we could make significant changes and deliver innovation was in the ‘field of battle;’ that means ‘innovating the sky.’ The sky in past Ace Combat titles compared to the sky in Ace Combat 7 is vastly different. Because of how alive the sky is in Ace Combat 7, it could be said that Ace Combat 7 has raised the bar to a higher level in the series.”

The skies in the game are beautiful. I always liked Ace Combat because the games feel like being part of the future. Flying around a 3D sky in Ace Combat 2 felt impossibly advanced 22 years ago, and rushing through those big skies in Ace Combat 7 gives me that same look-what-we-can-do feeling while still delivering the familiar feel of shooting down ships. Advanced as the technology rendering Ace Combat 7’s world is, though, the game also feels a little old-fashioned because of its subject matter. Even if I want Ace Combat around, I have to acknowledge that the 1980s pop fixation on military aircraft is long dead. I asked Kono why he still wants to make games about fighter jets in a world that’s moved on from stories about them.

“Everyone might have the basic desire ‘fly around the sky;’ on top of that, I also like mechanical objects,” he told me. “Game genre trends and pop culture elements come and go approximately every 20 years, so I expect that mech/machine related games might come back in style again this year. I’m sure Ace Combat has inspired some players to become a pilot or a game creator. The game itself won’t force a specific thought upon someone but we hope the game does inspire players. If each player is touched by Ace Combat in some way and delivers some positive influence upon their lives, that would be a great honor to us.”

“If each player is touched by Ace Combat in some way and delivers some positive influence upon their lives, that would be a great honor to us.”

Part of Ace Combat’s allure has always been its unusual emphasis on storytelling. If you’ve never played one of these games, discovering that the series is the narrative equivalent of Final Fantasy with planes instead of giant swords can be jarring. When Ace Combat 7 was announced in 2015, I was convinced that Bandai Namco would pivot to a more commercially modern format with less story and more focus on multiplayer and personalization/social features to maximize shareability and microtransaction revenue. My cynicism was unwarranted. Ace Combat 7’s still all high drama and bombastic dialogue between shootouts.

“The flight system is just a vehicle to deliver excitement and visually simulate a realistic flight experience,” said Kono. “Additionally, other elements like mission environments or special features of a mission can evolve, but those alone are not enough to touch players’ hearts. We can always choose to create a simpler game, but the Ace series has always sought to deliver a visceral feeling of being an ace pilot or hero. If the in-game world, characters, or situations don’t convey those terms, then we haven’t presented a way for players to feel like an ace pilot or hero. Thus, we really think that a great story is important, and we know longtime fans of the series are longing for a deep story.”

The only thing that truly disappointed me playing Ace Combat 7 was that while the game is gorgeous and technically accomplished, it’s not exactly what you’d call stylish. No one expects a semi-realistic, semi-sci-fi military drama action game to feel like a Banksy retrospective, but given Kono’s history I expected Ace Combat to have a slick artistic edge. Back before he was producing the Ace Combat series, Kono was the art director on 1998’s R4: Ridge Racer Type 4 and 2001’s Ace Combat 4, two of the most aesthetically silken games to come out of an unusually rich artistic period at Namco.

“I think the Ace Combat series might have taken over my art design and creative DNA,” Kono said when I asked about that period of his career. “But, having a distinct style can also be a restriction, like in cases where people say, ‘Ace Combat should be like this or like that,’ this can be both good and bad. Ridge Racer Type 4 and Ace Combat 4 were games I worked on during a time that was in the middle of a pop culture trend. The timing was perfect in that what I thought was cool was also what was cool for society. Also, I was young, and the scale of game development was not that big at that time, so I had more opportunity to present my art style in the dev process.”

When I asked him if he missed working as an art director, focusing on just one aspect of game rather than overseeing the whole thing, Kono said he couldn’t imagine going back to something so confining. “I became a game director because I was not satisfied with only being an art director. Then, on the next project, I became a game producer and brand director because I was not satisfied with just being a director. I do feel nostalgia towards my old positions, but at the same time, I know I cannot go back to those jobs either, LOL.”

Even if I long to play something as urbane as Ridge Racer Type 4, and even I can’t shake the feeling that I’m just no good at Ace Combat, I’m glad Kono’s still hard at work and recommitted to this series’ vision. Video games wouldn’t feel right to me if Ace Combat weren’t around.I ended our conversation with the same question I always do: What is the perfect cocktail to drink while playing Ace Combat 7?

“Please don’t pilot aircraft under the influence of any alcohol or drugs, LOL,” said Kono.