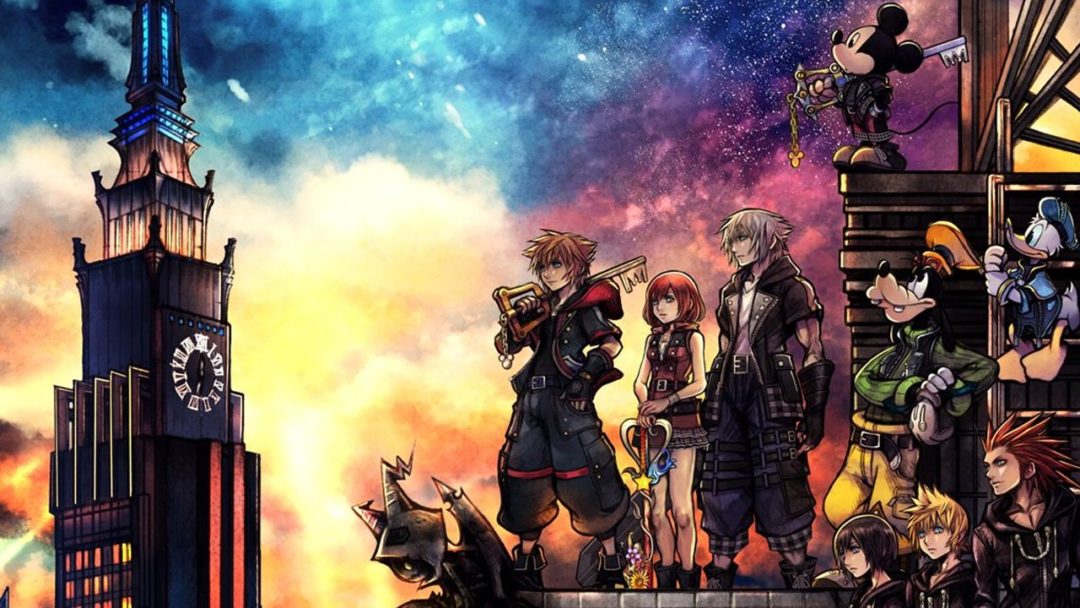 Henry Darger could not have made a video game, let alone one with the seemingly infinite resources available to Tetsuya Nomura. The work he spent untold hours producing in his otherwise quiet life could only exist because it cost so little to produce, its labor born of and benefitting from bottomless passion and complete anonymity. James Hampton, who like Darger was a janitor and secretive artist, spent 14 years building shimmering religious thrones out of discarded metal and junk. But even if he instead spent that time hunched over a laptop fiddling with Unity while swilling strong coffee and blasting low-fi beats the game he made would not be the histrionic totem to pop spectacle that is Kingdom Hearts 3. The man couldn’t hire a Hanks imitator let alone the flesh and blood actual Hanks (it’s Tom’s brother Jim, not THE Hanks) that voices Woody in Kingdom Hearts’ Toy Story world. Darger’s light hand couldn’t animate those impossibly expressive digital plastic eyes.

Yet the same spirit animating the work of Darger, Hampton, and every other outsider artist burns inside Nomura’s opus. The Kingdom Hearts series may be the most experienced and profitable work of outsider art ever made, and it’s a testament to what a unique vision can do when it’s given free creative and economic reign to use the most vast palate on earth.

Outsider may not be the right term for Nomura. Outsider art has been called many things over the past century — raw art, intuitive art, visionary art, art brut — but it remains an umbrella that’s far more useful than precise. While the loose genre has its roots in celebrating and preserving art made by people suffering from mental illness, it grew to encompass all art made beyond the confines of established communities and disciplines. Darger’s signature work, for example, is The Story of the Vivian Girls, in What Is Known as the Realms of the Unreal, of the Glandeco-Angelinian War Storm, Caused by the Child Slave Rebellion, a 15,000-page document split into 15 volumes and accompanied by a collection of delicate, hallucinatory drawings of his cast of hermaphroditic immortal heroes. The man didn’t get a grant to chisel away at his fantasy world. No one even knew he was making anything until his landlord started clearing out his home after his death in 1973. Darger didn’t finish high school. His paintings now fetch hundreds of thousands of dollars at auction but he was gone before anyone wanted to ask him about his inspirations and methods.

Coming up through the ranks of Squaresoft in its gilded creative age in the ‘90s by flexing his illustrative muscles on games like Final Fantasy VI, Tetsuya Nomura was part of a maverick wing of commercial art, but he was definitely part of an established community. His work was scrutinized by his peers. His personal expressions were incorporated into the broader tapestry of a finished game that was ultimately enjoyed by a devoted global audience that continues to grow decades later. Were Final Fantasy VII and The World Ends With You the extent of Nomura’s output, there’d be no question about his insider status. But then there’s Kingdom Hearts. The series is so bizarre, so utterly idiosyncratic, that it feels like a private labor stretching over decades as much as it does a successful commercial product worked on by hundreds of craftsmen and consumed by millions.

What distinguishes Nomura’s creation from James Hampton’s Throne of the Third Heaven of the Nations’ Millennium General Assembly is not just that it was made well inside an artistic establishment but that it was made using the most recognizable cultural icons in modern human civilization. Mickey Mouse is a global phenomenon, a pop culture deity in his own right and the symbol of a massive entertainment business. Rather than entrench Nomura’s work further inside the establishment, Mickey’s presence alongside his pantheon of Disney icons makes Kingdom Hearts feel even more ethereal, othered in its medium, and powerfully moving.

Consider the surface strangeness of seemingly rote moments throughout Kingdom Hearts 3. Protagonist Sora is a messianic figure who is both cosmically significant and deeply fallible, cartoonishly innocent but also a fuck up, like Krishna as conceived by 1950s-era Charles Schultz. He travels alongside magical incarnations of Donald Duck and Goofy to worlds based on Disney films that provide truncated retellings of their stories or quiet sequels. After two decades of games, this formula remains the bedrock of Kingdom Hearts’ structure. Familiarity has rendered its initial peculiarity inert, at least until you pay close attention to moments like the end of Kingdom Hearts 3’s Pirates of the Caribbean-themed chapter. Taking place during the events of 2007’s Pirates of the Caribbean: At World’s End, this sequence ends the same way as the film: with pirate captain Jack Sparrow and Will Turner rolling their mystic galleons up on the evil Cutler Beckett’s East India Trading Company ship and blowing it to smithereens.

It’s strange that a 2019 blockbuster game would choose a 12-year-old entry from a faded franchise to enrich its story about the struggle between spiky haired archetypes embodying humanity’s internal struggle between kindness and indifference. Not necessarily other, but definitely strange. That its climax replicates a scene of profound violence and puts the 87-year-old, guffawing mug of Goofy right in the middle of it takes Kingdom Hearts 3 right past avant-garde and into hallucinatory territory. No one looking to just make money or entertain does this; only someone with a vision chooses to make Goofy complicit in murder in an otherwise insignificant scene. That a story beat like this exists — or that it is allowed to exist by the largest media company on earth — is nothing short of bizarre. It would be like if outsider painter Holly Farrell’s unnerving Barbie paintings were licensed by Mattel to use as box art for the actual dolls, a crossing over between a deeply idiosyncratic co-opting of pop culture and the actual corporate machine that made it.

The general weirdness of Kingdom Hearts alone makes for a superficial similarity to the art of outsiders like Farrell or Darger, even though its weirdness comes from the unfettered use of characters so iconic that they defined pop iconography. But what makes Kingdom Hearts, and especially Kingdom Hearts 3, really feel like the work of an outsider is its onliest storytelling language and devotional tone that borders on and sometimes flat out tilts over into the spiritual.

The rules of dramatic staging, narrative flow, and natural dialogue have absolutely no bearing on Kingdom Hearts 3; it shouldn’t work at all. Even basic conversations have a stilted extra-human cadence that is unlike anything else in video games, let alone the movies that are woven into the fabric of the series. Kingdom Hearts is so committed to its own language of emotional catharsis that it will shatter what would be a crowd pleasing action set piece just to let its characters linger on a private soliloquy that doesn’t make any narrative sense. At the end of Kingdom Hearts 3, Sora has to wander a stone maze helping his longtime companions and dearest friends in their semi-private battles with Organization XIII. The Organization is a cabal of superhuman people trying to force an apocalyptic confrontation between avatars of light and dark. Each member is simultaneously their own person, a soulless version of a previously human character, and a vessel for the series’ ultimate villain. Keep up or don’t. Kingdom Hearts won’t wait.

When Sora rushes to help Mickey Mouse, for example, he takes on three different members of the Organization at the same time. Whittle down the lifebar of Marluxia, the magenta-haired androgynous villain of Kingdom Hearts: Chain of Memories, and he won’t just step down while you also defeat Luxord, a goateed cross between Gambit and Simon Pegg, and the flippant anime Annie Lennox proxy Larxene. Everything will stop, including Mickey, so Sora and Marluxia can reflect on what it’s all been about. Everything; the game, their history, life itself. Where are the other people trying to kill Sora? Why is Marluxia given back his humanity in his final moments? Why is Mickey, the most recognizable cartoon silhouette on earth, just standing there? Because this character the player isn’t even necessarily intimate with needs this moment of repentance all to themselves. Nothing else matters, at least until the next moment of epiphany arrives mere minutes later. This is one of literally hundreds of moments in the game that have the air not of dramatic precision but of ritualistic reverence. To play Kingdom Hearts is to be at the mercy of that ritual. You have to follow the game wherever it goes without any rules or audience proxy to guide you.

Playing Kingdom Hearts 3 can feel as alien as standing in front of one of Darger’s paintings. It’s a window into something so different that you can feel the electricity in your brain trying to physically reconcile your confusion, repulsion, and awe. Staring at Darger’s work, I could feel the analytic part of my mind withdrawing, exhausted by those conflicting impulses. I was transported, just as I am every single time I play a Kingdom Hearts game.

I find myself wondering why it is that Nomura’s singular vision is backed by the efforts of hundreds of craftsmen around the world so that it can be seen and experienced. I don’t think there’s an answer to that question. There’s no single reason that Nomura got to see these games made and James Hampton’s work rusted for years in a lonely garage. His freedom should be an inspiration, though. Everyone in the business of making art should remember what’s possible when you remove the chains of expectation and form. The cumulative effect of Kingdom Hearts 3’s constant abstract ablution paired with casual conversations with Frozen’s Princess Anna isn’t emotional paralysis or intellectual distance. It’s revelation.