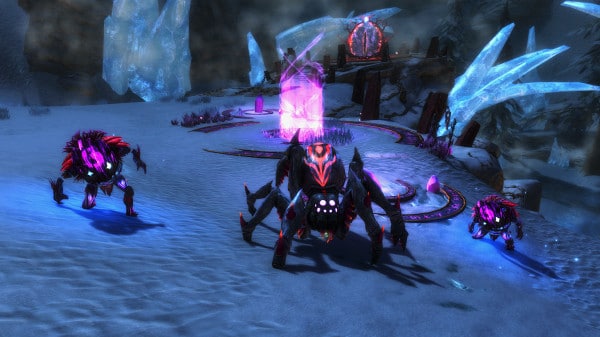 The Kingdoms of Amalur: Re-Reckoning – Fatesworn expansion has received a release date trailer, revealing a December 14, 2021 launch for PC, PlayStation 4, and Xbox One. (A Nintendo Switch release date will follow in 2022.) The trailer reveals the launch date by way of an animated, mythical play and tells the story of the next threat coming to players in the kingdoms. Fatesworn will deliver the new location of Mithros and a main quest that will take more than six hours to complete.

Players will also have the opportunity to explore the new Chaos game mechanic, a new level cap of 50, and two new dungeon sets, and there will be plenty of new armors and weapons to take advantage of. Publisher THQ Nordic provided a summary of some of the other things players can expect in the Kingdoms of Amalur: Re-Reckoning – Fatesworn expansion DLC:

Journey to a brand-new region in Amalur, filled with snowy tundras, deep caverns, and treacherous enemies. Visit mountain villages and the ancient lakeside city of Crownhold and master the unstable power of Chaos with a new skill, weapons and armor. As the fabled Fatesworn, you will wage a last battle against the Niskaru and their Chaos brethren, as procedurally generated Chaos dungeons turn every region in Kingdoms of Amalur: Re-Reckoning into a potential battlefield.

Grant Kirkhope additionally composed new music for the Kingdoms of Amalur: Re-Reckoning Fatesworn DLC that you’ll hear as you tackle sidequests and explore additional villages and cities. Fatesworn will retail for $19.99 on PC, PlayStation 4, and Xbox One when it launches, and until then, you can watch the release date trailer below.