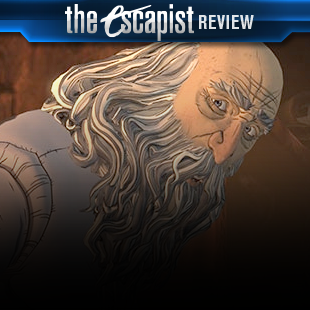 The definition of “adventure game” has changed since the days of the original King’s Quest. What used to be a genre about banging your head against puzzles and dying repeatedly, has evolved into something more cinematic after the rise to popularity of Telltale projects such as The Walking Dead. It would have been easy for The Odd Gentlemen to make their revival, King’s Quest: A Knight to Remember, into a Telltale clone with a focus on dialogue choice and we would have liked it. Instead, they decided to go one step further and attempt to make it feel like an older Sierra game, while still adhering to the modern adventure game formula. For better and worse, this gives King’s Quest: A Knight to Remember a unique identity in a genre whose games tend to feel like carbon copies of one another.

King’s Quest tells the story of, well, King’s Quest, but in a new way. King Graham is now old and withered, nearing the end of his life. He spends most of his days in bed, telling his stories of adventure to anyone who will listen. His favorite audience is his granddaughter Gwendolyn, a rambunctious young scamp who has inherited his love of adventure.

This is the frame for the plot, a Big Fish story when your actions make up the story itself. Episode 1 begins far before Graham was even a knight, much less a king, and by the time episode 5 ends, the events of all prior King’s Quest games will have transpired and we will have rejoined Graham and Gwendolyn in the present day.

What’s unique about this format is that there is not one, but three plots running concurrently. The first is the story that is being told, the events of the past that you, the player, get to influence as a young Graham. The second, is Graham and Gwendolyn’s narration over the story, which doesn’t always line up with the actual events that transpire. Graham loves to embellish his deeds telling Gwendolyn of what a fearless knight he was when in actuality he was tripping over his own two feet and acting as comic relief. The third, is what happens to Gwendolyn after the stories are told. She learns something from every tale and we get to see her apply this knowledge to conflicts she faces in her day to day life. There’s something heartwarming and magical about watching the younger generation learn from the advice of the older generation. It’s almost symbolic of how this game came to be, with older King’s Quest titles informing the design of this new one, and you getting to play the result.

Gameplay is separated into three distinct parts, adventuring, conversing, and quick-time events. While adventuring, you will explore Daventry and solve puzzles, and while conversing, you will learn important information, meet new allies, and make choices that will alter the narrative. When there’s a quick time event you are… pressing buttons to not die. Not everything can be innovative.

King’s Quest sets itself apart from other modern adventure games by including these gameplay elements in different ratios to what you might expect. While most of a Telltale-style adventure game is spent conversing, you spend most of King’s Quest adventuring. There’s always a new puzzle to solve or place to go, and it makes the game feel very active and interactive.

It doesn’t feel like you are just watching a movie and making a choice every so often. In fact, you frequently get to make choices outside of dialogue. Many puzzles have multiple solutions, and how you solve them is as important as what you say afterward. Heck, there are even quicktime events that you can complete different ways!

It’s clear King’s Quest was designed this way to feel more like an original Sierra game, and to that effect it succeeds. However, there are times when it feels a bit too much like a game from the past. The focus on adventuring makes it easy to get lost. The game doesn’t ferry you from point to point, but rather asks you to wander Daventry, filling your inventory and picking up clues. With no in-game map to take advantage of and certain puzzle pieces situated several screens away from each other, traveling can become tedious quick.

Another holdover from older Sierra games is death. There are tons of things that can kill you in King’s Quest, from choosing the wrong dialogue option, to triggering traps, to leisurely walking right in to a Dragon’s maw. Unlike older Sierra games, however, death isn’t a failure state. Dying simply makes you makes you resume play from your last checkpoint, usually with a witty quip from Graham and Gwendolyn about your recklessness. This allows player to indulge their desire to see the many ways Graham can die with little in-game consequence. There are times, however, when checkpoints are too few and far between for my liking, which means a death results in, guess what, more traveling to get to wherever you were last.

One final inspiration taken from older King’s Quest titles is the sheer length of the adventure. For an episodic game, King’s Quest is long. Expect to play for about six hours before you hit the end, at least two play sessions. Compare this to the two hour run time episodes in games like The Walking Dead or Life Is Strange have. It’s almost too much!. Even though you spend a lot of time solving puzzles, this is still a cinematic game, and I couldn’t imagine sitting through a six-hour movie, especially one where so much time is spent traveling.

King’s Quest shines brightest in its audio and visual design. The voice acting is top notch. Christopher Lloyd gives an award-worthy performance as old King Graham. The cast is filled with recognizable names like Wallace Shawn and Zelda Williams. They even managed to get the guy who did the voice of Gaston in Beauty and the Beast to do a role. The sound effects are also amazing, each one an updated take on the familiar chimes of King’s Quests past.

The animation looks like a Don Bluth cartoon suddenly became aware of the third dimension. Character models are beautiful and they move with such exuberance. The facial expressions convey so much emotion that it’s easy to empathize with the game’s characters immediately. King’s Quest is as much a joy to watch as it is to play. Actually, I’d wager that it’s more of a joy to watch than it is to play, as you won’t have to contend with those frustrating moments when you just can’t figure out the solution to a puzzle.

King’s Quest is a game that almost moved me to tears. It’s not that it’s particularly emotional. It’s just that it fills you with such an overwhelming sense of nostalgia. It’s been eighteen years since the last King’s Quest game was released and thirty five since Wizard and the Princess, the very first in the series, came out. This is a piece of history, moving and living right in front of your eyes; one of the first of the adventure genre all grown-up and taking its place among the AAA titles of the modern day. It may have its flaws, but it’s an important game to play, if only because it sets an example of how to be an adventure game, without being just an interactive movie.

Bottom Line: King’s Quest: A Knight to Remember is a very promising start to a worthy revival of the classic adventure franchise.

Recommendation: If you are a classic Sierra fan, then you will love this title. Otherwise, it’s still worth a look if you are a fan of games like The Walking Dead and Life Is Strange, but expect it to overstay its welcome just a bit.