In February 2006, actor Joaquin Phoenix may have come close to death.

He had been in a car crash on a mostly-desolate L.A. road late at night. The car was totaled and flipped on its back, its driver (Phoenix) had been stunned into a daze and awoke mostly enveloped in the deployed airbag, and gasoline was leaking.

Then, from seemingly out of nowhere, a man appeared on the scene – inspecting the wreck, and urging Phoenix to “calm down” as he helped him from the car and made sure he was ok. By the time the official police and emergency personnel had arrived, the Good Samaritan had literally vanished into the night.

More incredible than the story was Phoenix’s subsequent revelation of just who his savior had been: Real-life superhero? Wandering do-gooder? Saintly homeless man? No. It was a film director: German moviemaker Werner Herzog.
More incredible than that? It’s not even the most interesting story about Herzog out there. Once, during an interview, he and members of the press were fired at by a sniper with an air-rifle. As the interviewer took cover, Herzog is said to have glibly noted “someone is shooting at us,” taken a hit from one of the pellets, then continued with the interview indoors. (“It was not a significant bullet,” he later elaborated.) Most famously of all, he’s reputed to have forced actor (and certifiable lunatic) Klaus Kinski to continue with a scene (Kinski was becoming impatient and violent with the other actors) by threatening to shoot him dead. They were in the middle of the jungle. Both men had guns. Neither was kidding. To date, Herzog is the only director of feature films to have made a movie on every continent on the planet Earth. (Anybody else craving a Dos Equis right about now?)

This can’t be a real guy, right? And if he is real, his movies can’t be that good (though admit it, after hearing all that you know you wanna see at least one of `em). Men who lead lives this interesting are too busy doing things you make great movies about to make great movies themselves.

No. Not only does Werner Herzog make good films, he’s made more than a few great films – one-of-a-kind films that blur the line between the sweeping epic and the subtle arthouse. When he makes documentaries, he’s said to openly stage moments and give “real” people “better” dialogue; and when he makes fiction he infuses it with the realism of a documentary – when filming the story of a man who pulled a steam ship over a mountain, he actually did just that.

Herzog is, of course, the director of this week’s Escape to the Movies subject, “Bad Lieutenant: Port of Call New Orleans” (which gives me opportunity to tell you all that stuff and, more substantively, to recommend some of his movies to you. As before, this isn’t a “best” list or an academic summation (so movie people please don’t write to scold me for “forgetting” something) so much as it’s a rundown of the man’s work that A) you can actually find for the most part and B) will give you a good idea what to expect if you were to seek out the rest of it. So, then, let’s start with:

Almost every discussion of Herzog begins with this film, the first and greatest of his collaborations with his lifelong “best fiend” (read it again) Klaus Kinski (this was the film during which they threatened to kill each another). Herzog’s favorite subject is that of the madman-as-hero, and Kinski was modern moviemaking’s greatest madman; an actor so volatile and prone to violent outburst few would ever work with him for long. They made five films together, comprising some of the best work of either man’s career. Kinski is Aguirre, the egomaniacal leader of a group of Spanish Conquistadors trekking through South America. He’s already a dangerous psychotic, and the deeper they go into the jungle the deeper he does into madness, finally taking everyone else with him. It’s like watching “Apocalypse Now” from Colonel Kurtz’s perspective, except Kurtz was never as far gone as Aguirre is. Elevating everything is Herzog’s spectacular eye for realism. There are almost no special effects – real actors crossing real mountains, fording a real river in a real jungle with real natives and live wild animals… and, of course, a mad character played by an actor who really does seem to be losing his mind right there on camera. If you see only one movie on this list, make it this one. 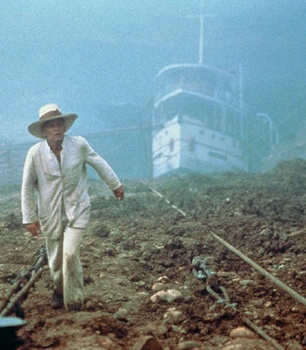 The second most-famous Herzog/Kinski collaboration, covering similar ground to “Aguirre” but with a lighter touch that almost borders on whimsy save for the ever-present sense of madness on display. Fitzcarraldo is a big-picture dreamer with a mad – and yet somehow childishly endearing – scheme to build a world-class opera house in the jungles of Peru. Part of his plan involves moving a massive steam ship from one river to another by dragging the boat over a mountain. And to achieve the scenes of this ridiculous endeavor, Herzog and company actually did it for real and put the process on film. It’s amazing how funny such a deranged and dangerous plan eventually seems to be, and downright shocking just how much you might find yourself rooting for Fitzcarraldo to pull it off.

Technically, Herzog didn’t direct this one, but he co-wrote it and stars in it – as himself. It’s a spoof of Hollywood moviemaking and of Herzog’s own reputation, and he’s definitely in on the joke. Supposedly made up of Blair Witch-like “found footage,” we watch Herzog get hired by producer Zak Penn (also as himself and the film’s real director) to shoot a documentary about Loch Ness superstitions, only to find that it’s not the project he signed up for: A swimsuit model is “playing” one of his experts, and he catches producer Penn trying to sneak a special-effect Nessie head into the shots. It’s a film shoot from hell, and that’s before the boat stalls and the filmmakers find themselves attacked by something, well, monstrous in the water. Uh-oh.

One of the best of Herzog’s documentaries, a historical record/interview piece about Dieter Dengler – a German-born American fighter pilot who was shot down in the Vietnam War, imprisoned and tortured by the Viet Cong, who then fought his way out of the camp, through the jungle and back to freedom. He’s exactly the kind of odd, unassuming man that Herzog would make a non-documentary film about, and in fact, he did just that a decade later: The excellent, underrated “Rescue Dawn” with Christian Bale as Dengler. See them both, if you can.

Another documentary and another story of a driven man living and dying on his own very-likely-insane terms. Here, Herzog investigates the life of Timothy Treadwell, an amateur naturalist and animal activist who went to live among wild grizzly bears (and film himself doing so.) Treadwell was hoping to dispel the myths about bears as dangerous animals, but in a turn of truly pitch-dark irony, his mission ended when he and a companion were killed and devoured by the very bears he’d been studying. Think of it as the Bizzaro World version of “March of the Penguins.” The film includes some of the truly incredible footage Treadwell shot (though not the actual recording of his death) and it’s clear that Herzog – whose documentaries usually focus on the danger and darkness of the natural world – finds a kind of opposite number in Treadwell, who romanticized nature and animals to a point that they literally consumed him. It’s unclear whether or not Herzog (or anyone) has really figured out Treadwell through this investigation, but it’s fascinating to watch them try.

So there you go. Two all-time classic films, two documentaries and a self-parody. This list could be a lot longer, believe me: The other three collaborations with Kinski (“Woyzeck,” “Cobra Verde” and a remake of “Nosferatu” with Kinski as freakin’ Dracula) are all worth seeing as well, as is Herzog’s own documentary about his late muse “My Best Fiend.” He also made many great films with other actors, like “The Enigma of Kaspar Hauser” or “Invincible” with Tim Roth. And there are many, many more documentaries. But ones listed here are the ones you’ll have the least trouble locating, and make a nice primer should you want to see more.

The best part is, there’s never been a better time for you to discover him: Herzog is 67 years old, and right now his films are more widely-acclaimed (and available) and his name more well-known than they’ve ever been. Along with “Bad Lieutenant,” he actually has another movie coming out this year: A collaboration with David Lynch called “My Son, My Son, What Have Ye Done?” based on the true case of a man who murdered his mother with an antique sword, possibly while acting out a Sophocles play he’d been acting in – yet another in the ever-growing line of real events so strange that one might be forgiven for wondering if, somehow, the universe had willed them into being solely that Werner Herzog might make a movie out of them.