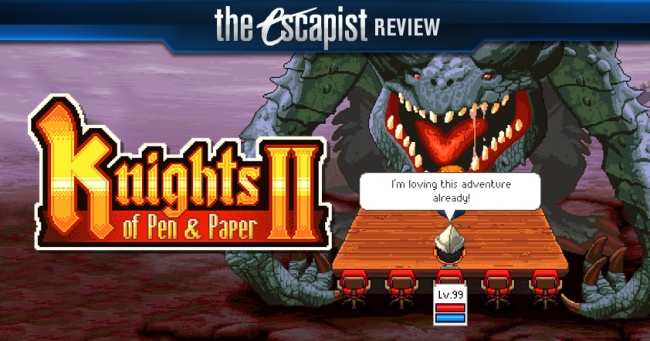 Just like the original game, Knights of Pen & Paper 2 takes place in the imagination of a dungeon master’s campaign – but this time the DM’s friend the Paper Knight is running a Second Edition character. That means he can terrorize the entire world of Paperos with “Second Edition powers” while his thugs disrupt the First Edition balance the DM had crafted so carefully. The player characters are the backup friends of the DM, sent on a quest to stop the Paper Knight from throwing Paperos into chaos. 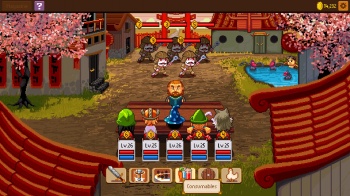 Once again, your heroes must explore a series of locations that reference and parody tabletop RPG tropes. Spawn Point Village is the cliched beginner’s area, with a twist: the rat population helps the town thrive. Big Town is the main hub of trade and social activity, where sentient slime and tentacle monsters infest the sewer system. At the far edge of the map is Zeroth, a desert where the dungeon master’s first attempts at drawing monsters and NPCs live. You’ll also become an air pirate, time travel back to the past, and save Big Town from XP mushroom abusing Boosted Bandits who terrorize the locals.

Knights of Pen & Paper 2 unfolds as you accept quests and bring some resolution to them. Some quests need you to kill a certain number of an enemy type. Others request an item that only drops when defeating particular opponents. Sometimes there are escort missions, where you battle mobs of foes to protect an NPC or item. These are all standard tasks for an RPG game, made fresh by inserting humor and jokes into the delivery.

Dice rolling is a key feature of Knights of Pen & Paper 2, adding an element of luck to your travels. Rolling too low in Fast travel dice spawns an enemy ambush on the road. Rolling a 20 gives you free items or encounters with secret characters. Camping in the wild also calls for a d20 to regain health points, as does avoiding traps or opening treasure chests. The dungeon system is a high point of the Knights of Pen & Paper 2 experience. It captures the spirit of D&D style games pretty well, and it can convince people who never played this type of game before to try it out.

There are three procedurally generated dungeons in the game, acting as the beginning, middle, and end of your campaign. Entering rooms will trigger some kind of dynamic event. Some events can be to your benefit – stumbling on gold or items. Your party might also find a prisoner who draws the dungeon layout on your map or tells you all the trap locations. But more often than not, you’ll end up in combat with monsters and various evil folk.

Enemy battles are turn based encounters against mob types based on the game area. Like any tabletop RPG, turn order is based on the initiative stats of your party and the adversary’s party. Just as in Knights of Pen & Paper 1, choosing to fight larger mob groups or taking on a variety of enemy types rewards you with larger XP rewards. Some locations also feature area effects that add buffs to the battlefield – usually in the enemy’s favor. Typical ailments include poison and burn damage, but your characters can also get confused and attack party members, be stunned and lose a turn, or enter a rage where the only option is straight-up attacking enemies. You’ll face a few difficult boss battles during the story quests, but it’s nothing that a grinding session beforehand can’t fix. 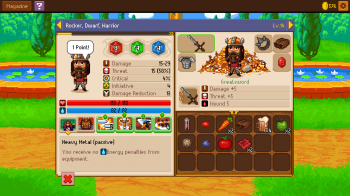 Leveling up your character skills is an essential part of the RPG experience of this game. You have five slots for party member options, allowing for a degree of strategy and planning. Each character has three factors to choose: background, race, and class. Their background is based on whatever type of player got wrapped up into this role-playing adventure, granting a passive bonus. A goth character can resurrect themselves for free. A jock has big hands to hold an extra weapon, and a surfer can chill out and recover from a status affliction. It’s an extra level of detail that makes character customization entertaining to experiment with.

Meanwhile, race grants you a choice between Human, Elf, and Dwarf for a particular stat bonus. Finally, classes determine what kind of moves party members have available for battle. There are variances on the standard three archetypes of Melee, Ranged, and Magic. For a hack and slash kind of approach – Warriors, Barbarians, and Paladins can please. Killing foes from afar is possible for the Thief, the Hunter, or the Ninja. But if magical powers are more your thing, Mages, Clerics, and Warlocks make that happen. If you want to try different builds, you can store extra party members at any tavern to free up space. It’s worth mentioning new characters start at level 1, making death an easy possibility. Buying a bulk supply of Phoenix Ups will come through in cases like that.

The item system separates into weapons/armor, trinkets, and consumables, all supplemented by a crafting mechanic. You have the standard swords, mauls, and battleaxes that all either take one or two hands to hold. Power-up scrolls and charms enchant weapons and armor to give them an extra edge in combat. It’s handy to have a sword that makes enemies take wound damage, get confused, or burn them for extra damage. What the crafting system adds is the ability to take loot drops and combine them into more powerful items. Find a tomato? Buy some dough and cheese, make a pizza out of it. Combine your hand wraps with a club to make a torch. Mix three rings of minor endurance to produce a ring of major endurance that has three times the power in one item. The only downside is you’ll reach the top gear tier pretty early in the game, an area Knights of Pen & Paper 2 really should flesh out in expansions and updates.

The Game Room adds an extra element of meta-level customization and stat boosting. All gold earned via one campaign automatically transfers to other save files. That allows you to buy furniture for the games room which grants bonuses across all of your games. Buying different tables might give better loot or reduce incoming damage to any party. A pinball machine can bump up the initiative stat a few points. There’s also a TV set that can make your consumables more effective. Buying a Poker Table adds a health restoration reward to your critical hits. There are a variety of categories to choose from, adding a layer of meta strategy to the campaign game.

Combined, Knights of Pen & Paper 2 simulates the imperfect, but undeniably fun experience of a tabletop RPG. It’s a game that pokes fun of entertainment culture and RPG stereotypes as a whole, bundled into an engaging 16-bit retro experience.

Bottom Line: Knights of Pen & Paper 2 is an RPG tabletop game where the imaginations of the dungeon master and players come to life in a great and original take on the experience.

Recommendation: Dungeons & Dragons fans should get most of the humor, but any fan of fantasy games will find it enjoyable.

Don’t forget to check out our review of Knights of Pen & Paper 2‘s first expansion, Here Be Dragons!