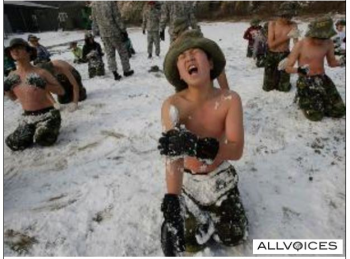 Just be glad you never got sent to boot camp when you missed a homework assignment due to your gaming habits.

It’s common knowledge that some countries take a more extreme view on videogame addiction than others. In South Korea, game addiction has made some shocking headlines over the years. However, the country’s response to the problem is surprisingly harsh, based on a series of photos that have recently appeared on the Web.

The photos show a number of Korean children going through what seem to be bizarre military training exercises. Included in the pictures are images of kids, some of them quite small, standing and laying in snow while shirtless (a standard practice in Korean Army training, apparently), performing exercises in mud, and often looking like they’re in quite a bit of pain.

From All Voices, which published these pictures:

In South Korea, kids who miss school, become addicted to video games or join gangs they will end up in specialized military training camps for some discipline and education. In these camps, the teens are trained military-style with standard soldier routines complete with army uniforms under extreme conditions.

This training program is aimed to make the young soldiers stronger and more responsible. During the course, the trainees are not allowed to get any form of dependence from parents. They are on their own.

According to one 15-year-old at a camp, he was forced into the program by his mother because he played too many videogames. “I hope this course would better me, so I could quit playing and give more focus on studying,” he said.

One of the guards/instructors spoke to the reporter and explained the philosophy of these camps: “Nowadays, the children are selfish and really dependent to parents. They even become violent and disrespect the older. Moreover they easily quit whenever encountering problems. It can be accepted in our country. For that reason, the parents would like to send their children to the military training course to help them to be better and win themselves.”

Source: All Voices via GamePolitics