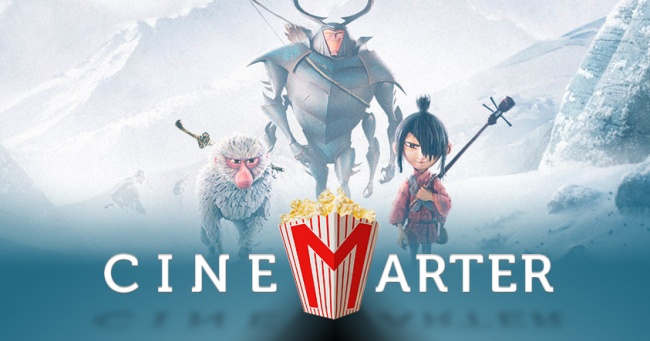 We don’t get many stop-motion animated movies. It makes sense why: they’re an incredible amount of tedious work. Remember the joke in Keanu where one of the characters spends a couple of weeks to create a stop-motion film, and finds out that he only actually got about two seconds of footage? Now imagine trying to make a feature-length film in that style. One of the only studios that does it is Laika, whose previous efforts include Coraline, ParaNorman, and The Boxtrolls. With its fourth feature, Kubo and the Two Strings, the studio finds itself recovering from the misstep that was The Boxtrolls, rebounding well to create its best feature to date.

Set in Ancient Japan, Kubo follows a one-eyed young boy, Kubo (voice of Art Parkinson), who spends his days telling stories in town and caring for his ailing mother in their reclusive mountain home. They’re in hiding, she tells him, as his grandfather (Ralph Fiennes) wants to steal his remaining eye and force him to “join the family” as a feelingless immortal in the sky. Eventually, the grandfather finds Kubo and his mother through his mother’s twin sisters (Rooney Mara), and she uses her remaining life force (read: magic) to teleport him away and bring to life a monkey totem (Charlize Theron) he kept in his pockets. 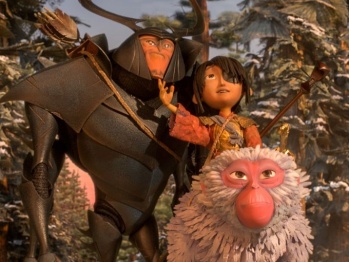 This sets Kubo on a hero’s journey that sees him team up with Beetle (Matthew McConaughey) and search for three magical MacGuffins that he’ll need in order to protect himself from his grandfather. All the while, Kubo plays his magical shamisen to magically bring origami figures to life – the most prominent one being a representation of his late father, who serves as the group’s compass.

It’s not an overly complicated story but it does have a couple of twists and turns (that you’ll likely predict). The tone that Kubo takes constantly skirts the line between joyous and melancholic, providing both some genuinely strong emotional moments as well as more than a few hearty laughs. It’s not a “dark” movie – it’s a PG-rated movie for children – but it has enough more mature themes that adults will appreciate more than their kids. It’s a great example of a “family” film – one that audience members from all age groups can appreciate.

Of course, Kubo looks absolutely stunning. You won’t see another film this year with the same aesthetic that this one does, and just about every frame is stunning. Stop-motion is an effect that, when done right, is incredibly effective, and Laika certainly knows how to do it right. It’s smooth, gorgeous, and detailed. It often has a lot going on, too, and you can only imagine how much work went into every shot.

Kubo and the Two Strings is the best Laika film and comes awfully close to being the best animated feature of the year.

If you’re going in hoping for action, you’ll get it. Each of the three MacGuffins is accompanied by the equivalent of a boss fight, and there are some smaller action scenes scattered throughout, too. If you’re hoping for laughs, it delivers. There more than a few comedic moments, and most of them produce hearty laughs. Kubo gives you plenty to think about and feel, too. It’s a complete package of a film.

It’s sometimes not a good sign when an animated film hires relatively known names for the vocal roles – relying on star power to overcome shortcomings elsewhere. That’s not the case here, thankfully. Charlize Theron, Matthew McConaughey, Rooney Mara, Ralph Fiennes, George Takei, and Cary-Hiroyuki Tagawa are all great. Theron and McConaughey get by far the most lines, and have to be tough, funny, and have strong chemistry with each other – and they deliver. Art Parkinson is the lead, and while he’s mostly fine, his natural accent slips in far more than it should. He’s trying to do an American accent and it’s usually passable, but it’s not hard to hear points when it’s inconsistent.

Kubo and the Two Strings is the best Laika film and comes awfully close to being the best animated feature of the year. It’s the total package: it runs your emotions through the gamut, is visually stunning at every turn, is thematically rich, and doesn’t pander to any audience group. It’s effective regardless of the age of the person who watches it. Kubo and the Two Strings is a delight.

Bottom Line: A wonderful film, Kubo and the Two Strings is the total package.