Cooperative multiplayer games have always been one of my favorite genres for relaxing and hanging out with my friends. Often sporting simple but addictive mechanics, these tests of friendship reveal some interesting facets to an acquaintance’s character. Do the culinary hijinks of Overcooked turn the group into a well-oiled hamburger-producing machine, or does the stress of running a kitchen result in scattered tomato slices and thrown controllers? Is your buddy the kind of person who helps fellow Fall Guys across the tilting seesaws, or do they prefer to lurk menacingly at the finish line? These games thrive in the chaos of friendships being tested, and Kungfu Cowboy benefits greatly from this manipulation of your mates. A free, tricky platformer with an equal measure of spike traps and gunplay, the game’s dangerous terrain is more fun to explore with a friend or two by your side.

Kungfu Cowboy has the player jumping and shooting their way through a surreal version of the old west, a desert full of ninja masters, floating skulls, and cannonballs. As the cowboy progresses further into the wilderness, he gains access to powerful, randomized weapons, but will also encounter more and more difficult enemies, culminating in an epic screen-filling boss battle. Only those with strong camaraderie and quick fingers will make it through this western bloodbath.

Only one level is present in the current build of Kungfu Cowboy, but with randomly generated obstacles and a high difficulty level, the relatively small area provides plenty of content for prospective cow wranglers. Indeed, it took a long time just for me to get my head around the controls. The controls are ostensibly straightforward on a gamepad, with the left side of the controller dedicated to platforming and the right side dedicated to gunplay, allowing for precision aiming whilst wall jumping up a cliff. 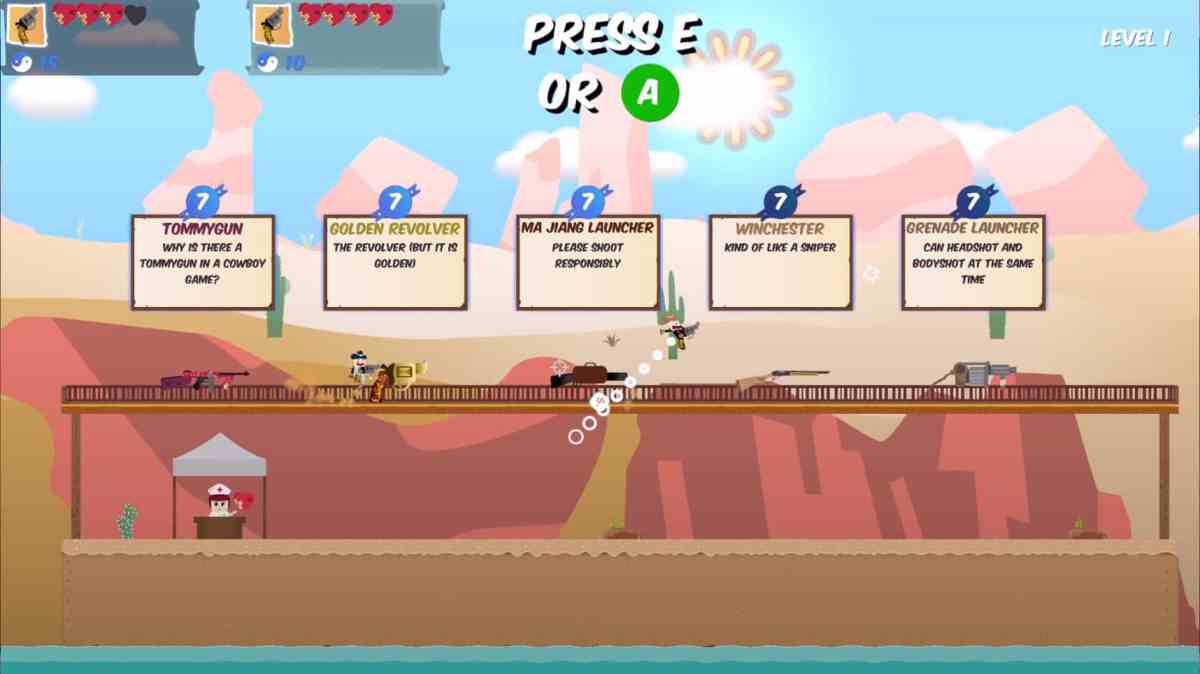 In practice, this is like trying to pat your head and rub your tummy at the same time. Whenever I tried shooting, my little cowboy would stumble around drunkenly, and focusing on avoiding a spike pit would inevitably result in the cowpoke getting shot by enemy fire. All bullets — both the player’s and enemies’ — ignore the geometry of the level, but I instinctively tried to duck for cover during the first hour or so of play. The random level generation, while adding variety, also made the difficulty level wildly inconsistent — a great big zigzag of challenge.

The solution to this frustration was roping in my husband to play with me, and with a second player Kungfu Cowboy‘s mechanics suddenly clicked into place. The number of enemies placed on each screen is much better suited to multiple players, with each of us targeting separate baddies for big groups or taking down a solo dangerous adversary faster. Figuring out tricky jumps is much easier when one person can be a human guinea pig flying across the spike pit, with the other player adjusting their plan depending on where the former lands. Gameplay tends to be faster and more fluid with two cowboys too, as the cautious inching forward of my single-player run is no fun when someone else is waiting.

With this assistance, I was able to push past the starting screens and experience the even more punishing second half of the game. At the midway point, players can heal up and purchase new weapons, with currency earned by defeating enemies. The randomly selected assortment of guns are all much more powerful than the starting weapon, but likewise the enemies of the latter half are much harder to kill, spraying bullets in a wide arc and taking more hits to defeat. The final boss was only glimpsed once in my play sessions: a towering specter of bovine wizardry. His patterns seem hard but fair though, and he would be surmountable with enough time put in.

I really came to appreciate Kungfu Cowboy, but it did take some time for me to get over that initial hurdle of difficulty. Since the game does work best in a party-type setting, a gentler difficulty curve would be helpful to entice the non-gamer friends to join in. The splash of roguelite sensibilities could also be expanded, perhaps by allowing the player to purchase more hearts to start with or a different weapon with the currency earned from kills. While performance was mostly smooth, I did encounter an odd bug where I would be controlling two cowboys with the same controller. This issue did not make the game unplayable, but it was certainly confusing when trying to guide two characters across a pit at the same time.

The rocky desert of Kungfu Cowboy is depicted in simple but pleasing sprites. The types of surfaces are highly readable, from deadly spikes to drop-through floors. Each enemy type is full of personality, with a whole range of evil skeletons, robed figures, and shadowy horses standing in the cowboy’s way. A plinky mix of stereotypical western and kung fu movie tones make for a delightful backing track, adding to the playful nature of the world.

Kungfu Cowboy is a prototype for a longer game, and it looks promising indeed. The learning curve is steep, but precision platforming and shooting is an unusual combination, and once the mechanics are understood this quirky fusion works well. For those who wish to support developer Soy Boy Games, a donation can be made on the game’s itch.io page.

Next week we will be playing Lianthus, an adventure game starring a very lost skeleton. The game can be downloaded from itch.io. If you would like to share your thoughts, discussions will be happening in the Discord server.