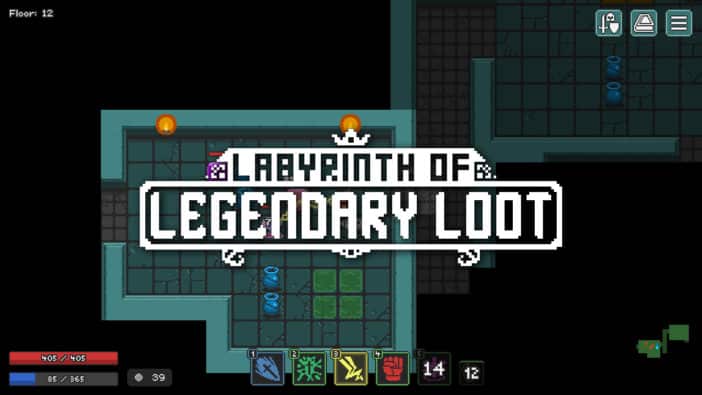 If nothing else, the recent re-release of Rogue on Steam is a fascinating insight into how much a genre has changed over 35 years. The requirements for a game to be considered a roguelike are quite minimal these days — include some aspect of random generation and permadeath and you are good to go. For the most part, I adore these wildly varied interpretations of the genre: Slay the Spire drew me into deck building in a way Magic: The Gathering never could, and the relationship system in Hades takes the sting out of a failed run. Sometimes, however, it is nice to go back to basics and play a roguelike that actually is like Rogue: the tile-based kind with mysterious objects and ruthless difficulty. Labyrinth of Legendary Loot is a highly compelling take on the traditional roguelike, using the promise of game-changing treasure to lure the player further downward.

Labyrinth of Legendary Loot, for the most part, plays like a traditional roguelike, with a few small tweaks to keep things interesting. Movement is done on a grid, with enemy actions occurring in step with the player’s movements. Watching how each enemy moves is vital: Jumping in the right direction will avoid the swipe of a werewolf’s claws, and the lightning blast from an evil mage is easily avoided once you know where it lands. Health regenerates at the beginning of each floor, but lose it all and the player is sent right back to the beginning, with nothing gained but knowledge.

Where the game differs from a traditional roguelike is how the titular loot behaves. 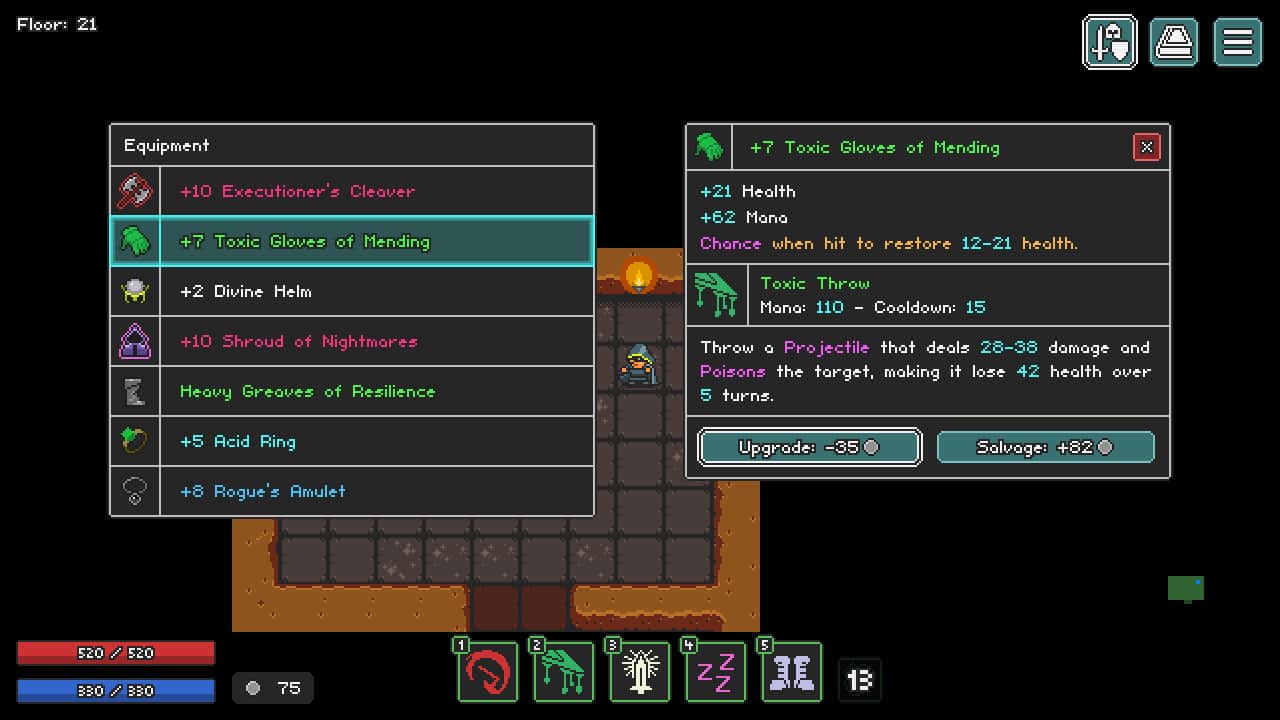 Luckily for the greedy protagonist, each level of the dungeon is littered with amazing treasures: weapons and armor that not only give a stat boost, but also gift the hero with magical abilities. They might find a cloak that can send all enemies in a room to sleep for a few turns, a dagger that poisons distant foes, or boots that can teleport the hero across the room. The list of available treasures is huge, with over a hundred different weapon and ability options. This variety keeps each run fresh and exciting, along with giving achievement hunters an extra goal in collecting them all. The powers are fun to play with but also drain a significant amount of magic points, requiring a careful approach to each room.

Management of the magical items forms the heart of the risk-versus-reward choices in Labyrinth of Legendary Loot. The game has no inventory system, so the player has to decide then and there if they want to switch a magical stave for a hammer that causes earthquakes. The discarded item is scrapped for parts, which can be used to make each trinket even more powerful. Having no inventory makes for a snappy pace and pushes potion hoarders like me to be more decisive. In similar titles I will often spend way too long sorting through my equipment, overthinking the best way to kill a low-level rat.

Magic management also plays a big part in choosing a setup: If all of one’s items take the entire magic bar to cast, the adventurer will be far too slow for the crowded rooms of the later levels. Upgrading items helps a little with mana costs, but a balance of small, medium, and big spells seems to work best. 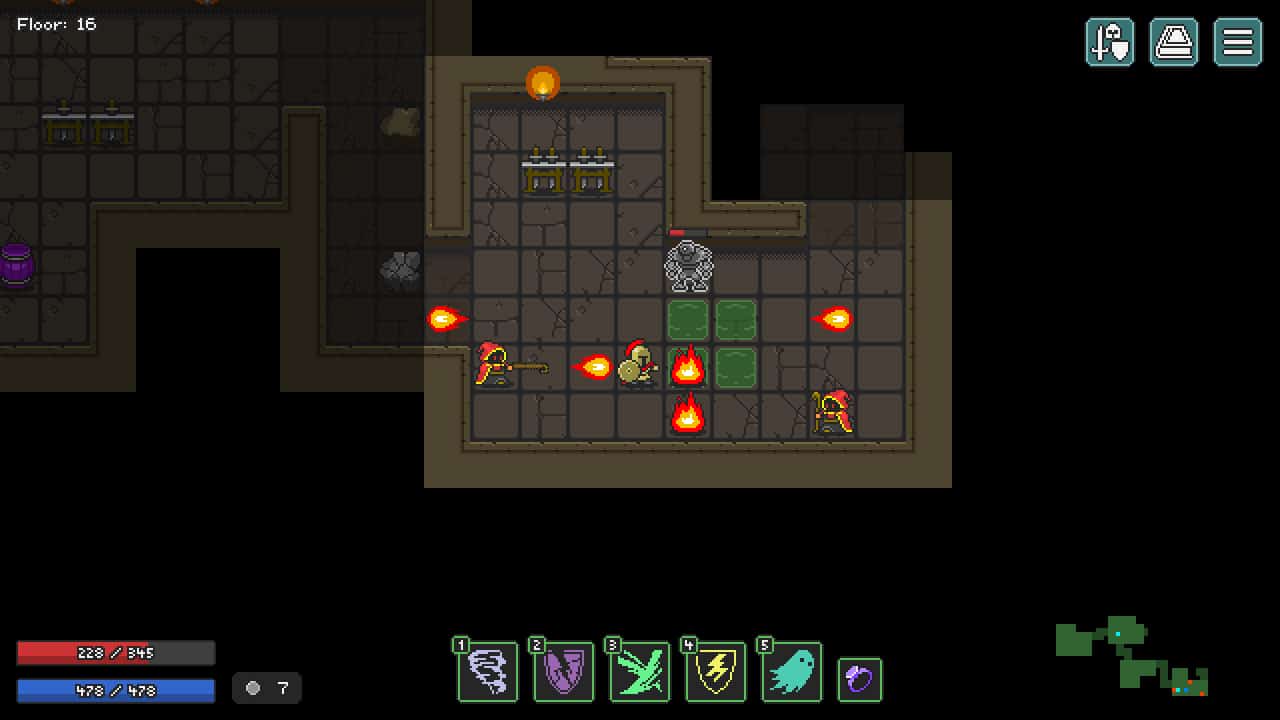 While Labyrinth of Legendary Loot is not exceedingly easy, the game would be suitable for players new to the genre due to some considerate choices. The tutorial is simple and clear, telling the player everything they need to know without a wall of exposition. A codex of terms is available on the pause menu, helping players understand exactly what a weapon does before picking it up. Healing on each floor is an uncommon occurrence for a roguelike, and the lack of a hunger meter streamlines the gameplay experience. Three difficulty settings affect how much health is dropped and how hard enemies strike, letting players lower the challenge without changing the core gameplay. Even on easy, however, players should expect to die at least a few times before reaching the bottom: When a new enemy type pops up, their unpredictable movement can be deadly.

Labyrinth of Legendary Loot has a graphical style reminiscent of late SNES-era games — smooth pixel art with a muted color scheme. For the most part the look works well, with each enemy beast having a distinct appearance, but a bit too much information is expressed solely through color. Tougher enemies have a clear, yellow, or red outline to show how difficult they are, which might be hard to distinguish for certain players. A red shading for when an enemy is about to launch a dangerous attack faces a similar issue: I could never tell when the fire mages were about to cast a spell since their robes were also in shades of red. The addition of a small symbol for dangerous enemies and charging attacks could be helpful. 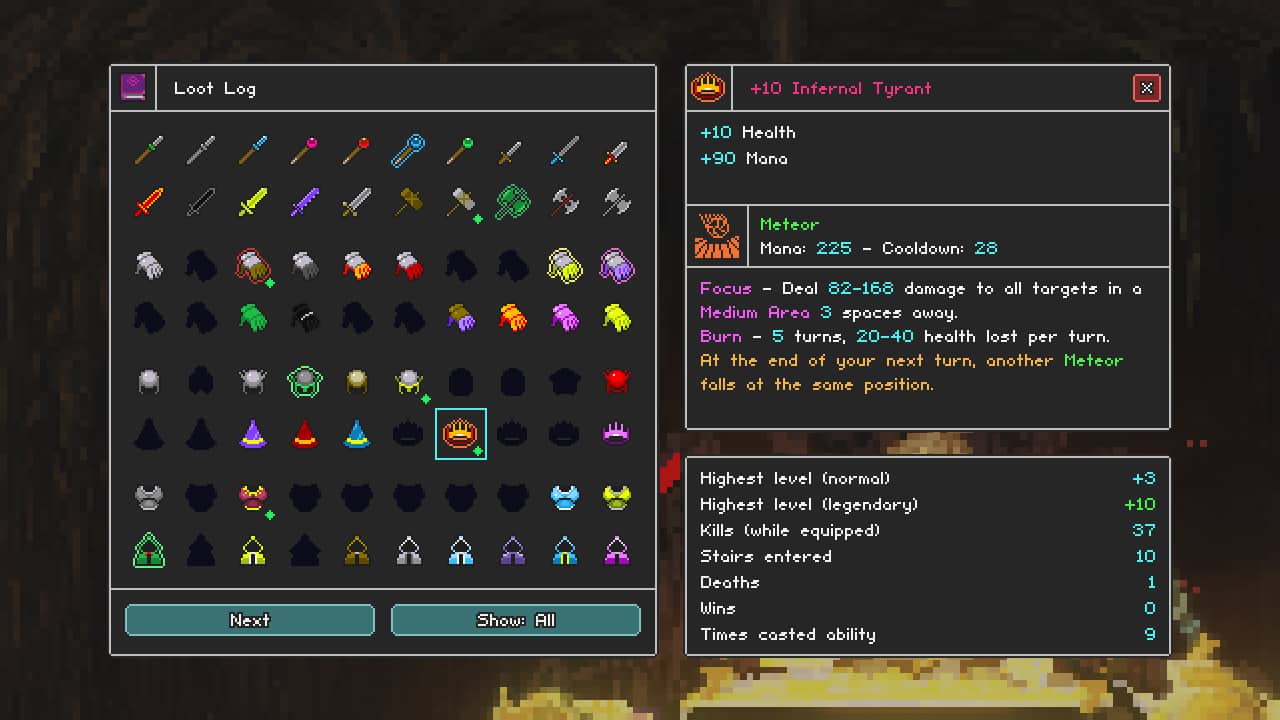 I had a great time with Labyrinth of Legendary Loot. As a fan of all things roguelike, I found this one to have just the right balance of traditional trappings and modern conveniences. Those who wish to support the developer can make a donation on the game’s itch.io page.

Next week we will be playing Killer Frequency, a horror puzzle game where the player, a radio host, tries to give advice to callers who are being stalked by a homicidal maniac. The game can be downloaded from Game Jolt. If you would like to share your thoughts, discussions will be happening in the Discord server.