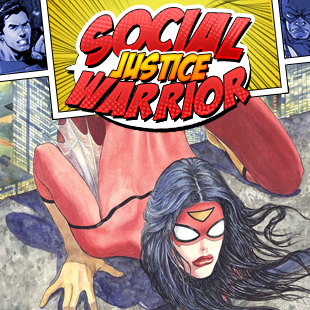 A rare instance in which both sides are right, the variant cover by Milo Manara is provocative and a provocation all at once.

Variant comic covers are usually a win-win-win. Yes, the practice emerged during the speculator boom that nearly destroyed the comics industry during the 1990s, but it isn’t inherently bad. For one thing, it allows notable artists to interpret a comic character in their own style, enriching the art of comics. For another, it can create genuinely collectable content that encourages greater sales of specific comic books, potentially enriching the coffers of a comic publisher. And for yet another, in many cases they serve as an introduction to an artist’s work for readers who might never have heard of them.

But as Marvel – maybe* – discovered to its chagrin, hiring an artist whose work falls far outside of a specific comic title’s assumed parameters can sometimes explode in one’s face.

This week, the company unveiled a special variant cover for Spider Woman #1, drawn by Italian comics legend Milo Manara. For those of you who don’t know, it’s long past time to dig into his work. His art is textured, detailed and subtle, and in many ways he’s the Jean Henri Gaston Giraud (AKA M?bius) of Italy, especially in how it’s impossible to separate his work from his country’s style of comic art. That he’s worked with luminaries like Fellini and Neil Gaiman, among many others, is only a tiny tribute to his impact and renown among visual artists of all stripes.

Here is, by the way, what he did for Marvel: 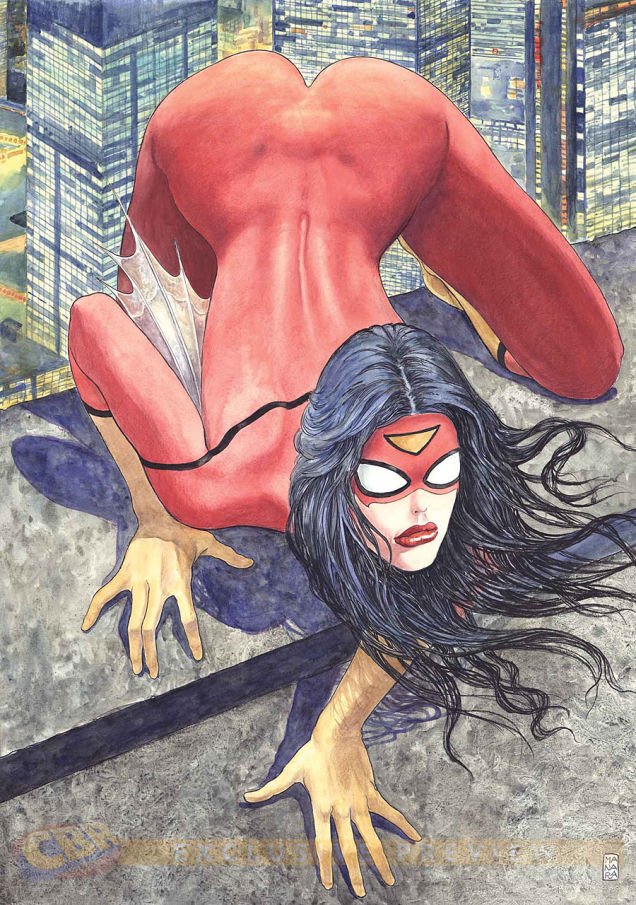 If this cover is the very first time you’ve paid attention to his work (or, as I’ve noticed in some cases, even heard of him), you probably won’t think “here is the work of a master”. And if you’re someone for whom the recent history of the comics industry is galling, it’s probably understandable if this image provokes a… less than enthusiastic response. So it was yesterday that reaction to Manara’s variant cover prompted a huge amount of fierce criticism. You can see a good cross-sampling here, here and here.

My initial reaction to these criticisms was negative. I’ll admit that I do think that some critics – NOT the ones I’ve cited here – veer dangerously close to a kind of anti-sex sentiment that suggests the eroticism itself is what is most offensive. Others critics do appear not to know who Milo Manara is, leading to some rather weird dismissals of his work. But these criticisms, I’m happy to report, make up a small minority of complaints.

The larger complaints get to something that my initial reaction to this cover missed. You see, I happen to think Manara is a genius and that comic readers would be genuinely enriched by checking out his work. I also happen to think that there is no possible harm that can come to anyone younger than adulthood who happens upon sexually charged (non-abusive) images. And I think, even accounting for the sad history of sexism intrinsically tied to it, that the pinup is an important pop art form that I’m always happy to see revived.

So what environment do we actually live in?

* Marvel almost certainly knew this would generate heat and controversy. There is no way the company was blindsided by this. 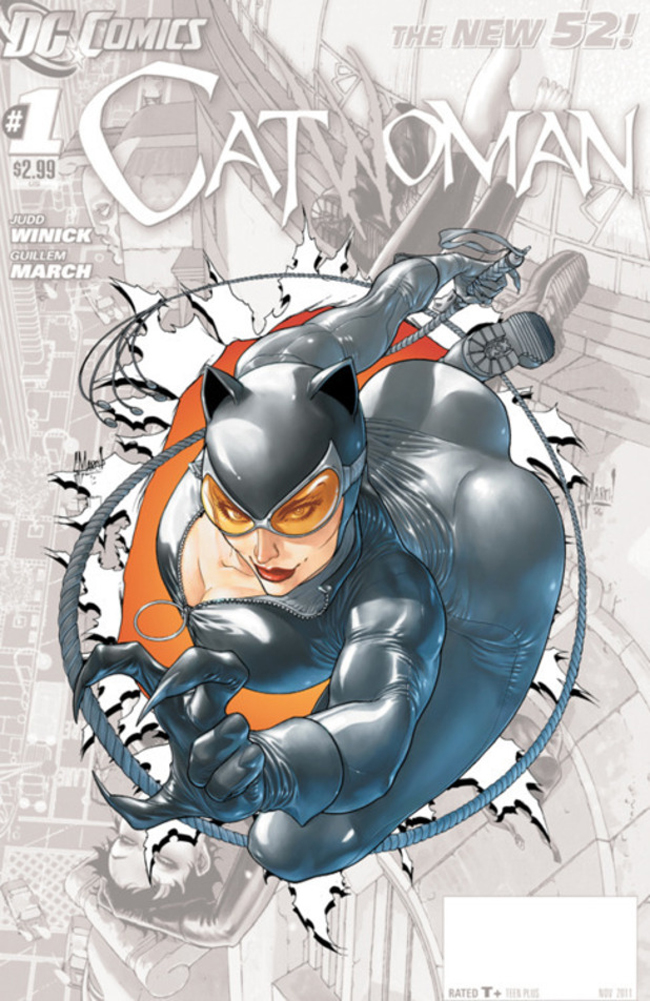 This is the original cover for Catwoman #0, intended to be released in 2011. The New 52 version of the character was in some ways meant to appeal to female and male comics fans alike, which made the impending series feel like a must-read. Until, that is, this cover was revealed. The recipient of enormous criticism for horribly mangling basic anatomy in service of titillation for no apparent purpose, it’s bad art, it’s a dumb cover, and it drips with such clumsy, obvious male gazing that it practically shouts at potential female readers to go away. DC was right to ditch it in response to massive criticism, and replace it with a much less crappy cover. (See how DC almost made the same mistake a couple of months later here.) 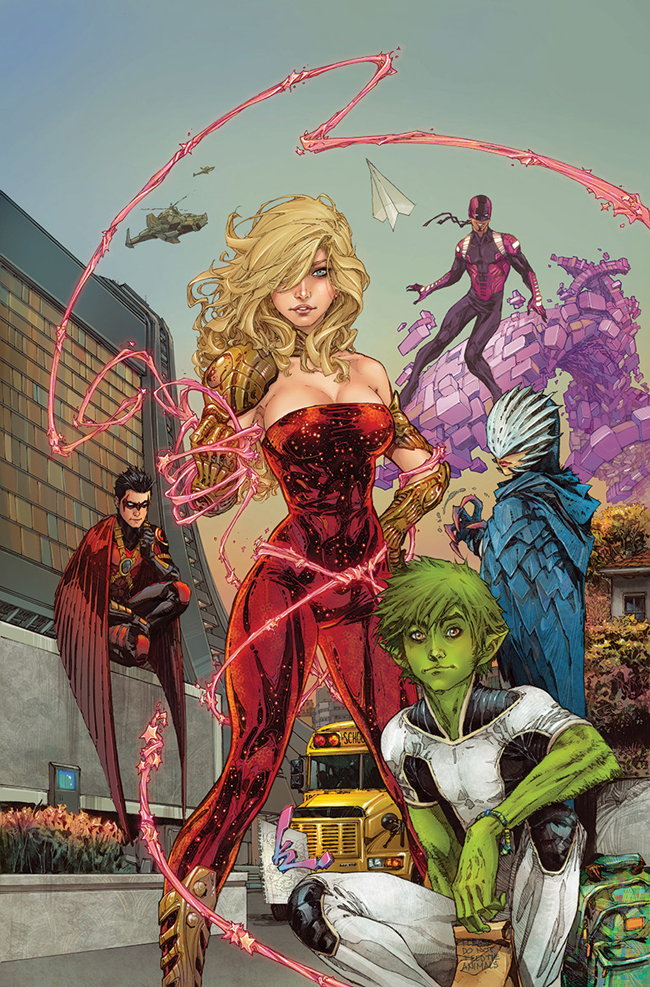 And here is the cover of Teen Titans #1 released earlier this year. Over on Comic Book Resources, Janelle Asselin wrote a scathing, but extremely professional and polite, criticism of it. She pointed out, among other things, that the limp presentation of the characters ruins the impression of the group as a team, and that it tells the reader nothing about the comic or the characters. But she also focused on how absurd Wonder Girl’s tits are. And she’s absolutely right. Wonder Girl appears to have been drawn by someone who has never seen natural breasts in their life, because they look like breast implants that threaten to explode from her clothing. Further, as Asselin notes, no one with breasts like this would wear anything strapless. It’s pure objectification that hilariously disregards the actual object in question.

Guess what? For having the unmitigated gall to politely and professionally offer constructive criticism of a piece of art, Asselin was subjected to a horrendous campaign of online abuse that included actual rape threats.

These are only two examples of many over the last few years in which the depiction of women by mainstream comics has, however unintended, alienated and frustrated potential female comic fans. More relevantly, the new Spider Woman series is an all male affair. Marvel’s top editorial people are all men. And this series, drawn by Greg Land, is written by Dennis Hopeless who, as Comic Book Resources notes, has previously been criticized for his depiction of women in his comics. 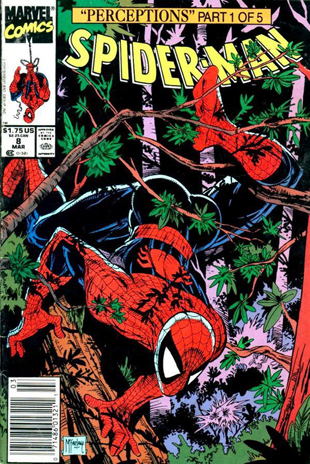 This is especially disappointing when you consider that Spider Woman is a popular character among female comic fans who, it should be noted, make up a sizable portion of the new series’ potential fanbase.

Many people have pointed out that Manara’s depiction of Spider Woman is superficially similar (and perhaps very referential) to Todd McFarlane’s famously butt-friendly drawings of Spider-Man, like the one you see right here. And they’re absolutely right to do so. But I think it’s fair to say that while McFarlane takes great pains to emphasize the lithe attractiveness of someone with Spider-Man’s physique, it is not, strictly speaking, a work of erotic art. What it does is provide a perfect illustration of the difference between sexualized men and sexualized women in our culture: men are idealized more than they are objectified.

There is nothing wrong with some level of objectification – again, Spider-Man’s ass is screaming for you to notice how firm and round it is – but for male characters, objectification never seems to also come with the apparent ignoring of any of their other characteristics. Female characters on the other hand, like Catwoman and Wonder Girl above, are essentially reduced to tits and asses as their primary characteristics.

When an uncomfortable recent history of tone deaf, dunderheaded idiocy pushes up against an equally uncomfortable history of American prudishness, it is tempting for people who should otherwise be fundamentally aligned to dig in and fight about the margins. But the vast majority of people pointing out problems with Marvel’s decision to run this cover aren’t doing so because they’re prudes. And the vast majority of people defending Manara aren’t being assholes. There are real problems this situation shines a light on, and they’re problems we should all agree ought to be solved at some point, right?

All of that said, I do think this cover is dope. Maybe not the right context to release it, mind you. If I ran Marvel, I’d hire a female comics writer (and there are LOTS of them who are excellent) stat, and perhaps get her input when it comes time to run the sexy variant cover. But it’s an excellent cover nonetheless, and I hope when this dies down, (and more importantly, as the problems discussed here become more fully addressed), people will appreciate Manara’s gifts for what they are.