Yes, we did this before. But now that we have the mounting reports that Warner Bros. Pictures is bouncing off the walls psyched about how much money they think Superman is about to earn for them and a trailer that seems to show significantly more of the movie-proper, let’s do it again.

As ever, the time-stamps are based on my viewings of this video, and your relative mileage may vary…

00:00 – 00:08
Here we see Russell Crowe as Jor-El, biological father of Kal-El, aka Superman. What do I like? The very Dune-esque design of Jor-El’s Kryptonian armor, and the fact that this is decidedly not the new age “Crystal Krypton” of the 70’s or 80’s.

What do I not like? From the looks of this, it seems as though Krypton is going down in some kind of war (or invasion?) in this version. Not sure how I feel about that, but if it’s the specific handiwork of Michael Shannon’s General Zod or some other big bad and they’ve decided to change Superman’s motivation from “Help people” to “You killed my planet!” I’m going to be seeing red before the damn thing even reaches Act II…

00:09 – 00:16
Jor-El and Lara load Baby Kal-El into this telling’s version of his escape pod. Liking the design work here – “futuristic” technology that’s also very, very old looking; as though Krypton is far advanced compared to Earth but also hasn’t actually done much of that advancing lately. This actually makes sense in the context of some spoiler-sounding details I’ve heard being thrown about, but I’ll play nice and not blow them here just in case.

00:24 – 00:32
Space. Planets. Lifepod. Company logos. The music starting to kick up here has been confirmed as part of Hans Zimmer’s official score for the film, and I like it. Another march-style theme for a superhero isn’t exactly breaking the mold, but at least it’s a rising build and not a dirge. The plain fact is, nothing will ever sound as Superman appropriate as the 1978 film’s John Williams theme, and I don’t envy anyone who has to follow it.

00:33 – 00:44
Scenes we’ve seen in the previous trailers: “portraits-in-handheld” shots of classical Americana that would be right at home in Tree of Life, building to reveal of a kid playing as Superman (still can’t tell if this is supposed to be Young Clark himself) .

That dialogue from Jor-El about a child being free to choose his own path is all kinds of interesting, considering he’d have to be saying this before the actual story of Kal/Clark growing up has kicked in. Hm…

She’s not impressed. She’s accusatory. Even if he was helpful, if a genuinely superior being – a god, if you like – showed up among us, humanity wouldn’t welcome him. We’d be jealous. We’d be afraid. We’d try to stop him, control him, checkmate him in some way. From the start, I suspected this would be the main thrust of Nolan/Goyer/Snyder’s new take on the character, and I seem to have called it correctly.

00:57 – 01:01
Hm. This is interesting. Clark is being shown the Kryptonian lifepod at a much younger age than he’s previously been depicted finding it (save for versions where they never kept it from him to begin with) by a Kevin Costner as Johnathan Kent – who looks like he’s actually going to survive into Clark’s adulthood this time. How much do you want to bet they end up having Zod kill him anyway as a way of cheaply upping the stakes for Act III?

Speaking of Pa Kent, though…

Oomph! I’m getting a really, really strong sense that Costner is going to kill in this part. Always such an underrated actor (some of that, to be fair, is his own doing) and this is the kind of stuff he’s seriously good at. Did you ever see The Upside of Anger? It’s different, but real good.

01:08 – 01:13
And here we see Clark the Bearded Hitchiker, as seen in previous trailers. As much as I like the idea of Clark Kent moving about the world as an anonymous, vision-questing do-gooder prior to establishing the Superman persona, I hope it’s not too much of the movie. Don’t fear the cape, guys – and also, please don’t make us sit through a bunch of tedious, unnecessary business explaining why Superman decides to dress like Superman.

01:14 – 01:19
Clark exploring what looks to be a spaceship (presumably Kryptonian) buried under arctic ice. I’m guessing this is the new origin for the Fortress of Solitude. Okay, I can get on board with that. This opens the door for the “Kryptonian super-tech at his disposal” part of the Superman mythos without having to go the problematic “also super-smart” route. This would be revisionism done right.

01:23 – 01:25
Now we see Alaskan (Crab?) Fisherman Clark, as seen in previous trailers. Thanks to Deadliest Catch, everyone now knows that this is an insanely dangerous job – so it’s funny/sensible that Superman does it. Clever.

01:26 – 01:30
A bearded, shirtless Clark versus collapsing oil rig. Big, badass-looking action, and an encouraging sign that they’ve taken note of how well prominently featured “beefcake shots” in trailers worked out for Thor and Captain America.

01:31 – 01:34
Lois’ monologue from 01:23 to here, notably, indicates that she’s been following Mysterious Strong Person around like he’s bigfoot even before he reveals himself. As much as I’m a sucker for “You’ve got me… whose got you!?” and “Nice S!”, this is another new angle I dig. It gives her just a little more agency, and an excuse to be in the plot earlier than usual.

01:35 – 01:53
I’ve seen Immortals, so I already know Henry Cavill can handle physical action and isn’t a bad actor by any stretch. However, if they had cast him for this strictly on the merits of really, really looking like Superman… good casting. That is one big, tall, classically-handsome dude doing the runway walk almost-reveal of the Superman costume right there.

Speaking of the costume: I hate the unnecessary fabric-texturing, I like the absence of the red underpants, I think the colors are okay but look better in the shots where there’s more light-contrast and I miss the yellow “S” logo on the back of the cape. 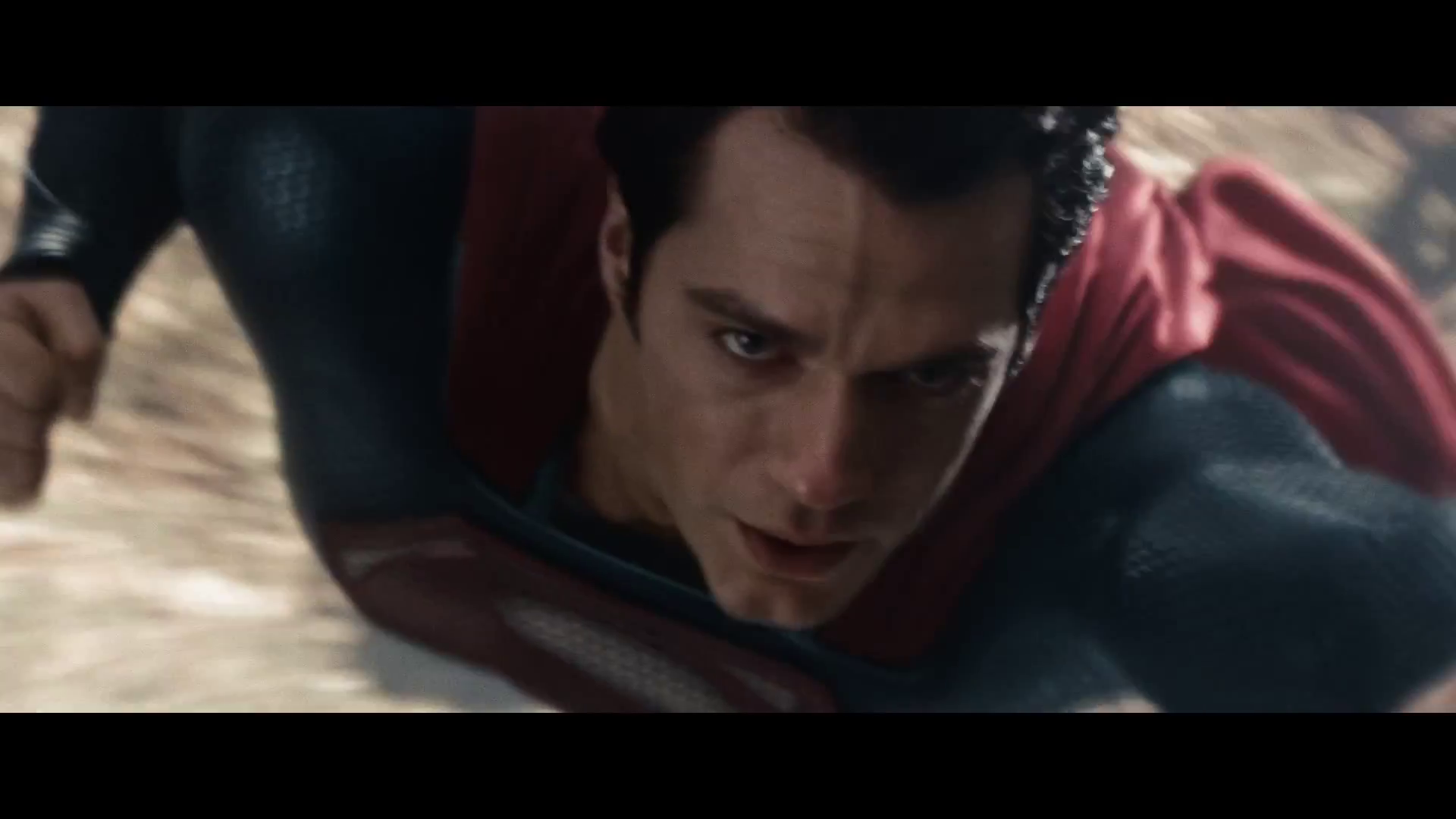 01:54 – 02:03
The fantastic “up, up and away!” shot from the earlier trailer, now underscored by more Jor-El narration. On the one hand, I’m really liking the lack of irony in the grandeur with which he describes Superman’s purpose. They’re not dancing around the symbolism at all – this is a literal Messiah-figure, a “god” here to improve humanity by example.

On the other hand, I worry that they might’ve missed a pretty important element of the character: Superman’s origin, traditionally, did has heavy religious/cultural undertones… but not specifically Christian ones. His creators were Jewish, and his origin was (intentionally or not) much more reflective of both the story of Moses and of the Jewish-American immigrant experience than it was of the Christ story.

02:06
Whoa. Okay, I have no idea what we’re seeing in this blink and miss it flash of… something. Tendrils? Tentacles? A big swirly mass of… stuff?

I’ll say this: If they’ve been punking us about the “gritty realism” stuff this whole time and that turns out to be Starro The Conqueror… well, then I’ll believe that Warner Bros. has actually gotten its act together on the DC Universe movies.

On the other hand… Parallax? No. No, that’s just not possible…

02:07
KA-BOOM! Plane crash! It almost looks like Superman body-slammed an airplane, in fact. The early buzz is that the action in this is way over the top.

Also! Weird quick shot of a four-winged flying animal (aircraft?) previously glimpsed in the Krypton War business at the beginning.

02:08 – 02:11
Superman fighting a light beam of some sort that kind of resembles the big planet-killer drill machine from the Star Trek reboot. Oh, come on guys – let’s give Zod something slightly more novel to do than blow-up/strip-mine the Earth…

02:12
Kryptonian(?) spacecraft hovering at the Kent Farm. Yeah… not looking good for one or both of them. Quick shot of Michael Shannon as General Zod, our first good look at our presumptive main villain. It looks like he’s being restrained here – about to get zapped off to The Phantom Zone?

02:13
Superman versus the army – the U.S. Army. Lack of “S” or not, I really like how the cape looks in all these shots. Supposedly it’s been done almost entirely in CGI, to allow Cavill (filmed without cape) to have maximum movement and have the cape always look functional and cool. That right there is the kind of stuff you hire Zack Snyder for.

02:14
People in Kryptonian Armor looking over a city (Metropolis?) from way up high. So, Zod has a spaceship, then.

02:15
Michael Shannon is a great, great, great bad guy actor. You can more clearly see that Zod and his mates are in Kryptonian prison shackles here, and that he seems particularly dead-set on finding Kal-El.

02:16
Pretty sure that was a missile’s-eye-view of… well, a missile. Fired at Superman.

02:17 – 02:22
Fireballs taking out a skyscraper, big guy (Zod?) in bulky battle armor, Superman moving at super speed in a firefight. Superman handily taking on a whole battalion’s worth of military ordinance? Yes. Yes, let’s have more of that.

02:23
Handcuffed Superman, now with semi-irony since we’ve now seen Zod similarly bound. It’ll be awesome if he’s just “being polite” by pretending that Earthling handcuffs can do a damn thing to him.

02:24
Mid-air fight, Superman vs. Zod or some other Kryptonian foe. For a long time, the four-way fight in Superman 2 was the best super-being fight scene ever committed to film… until that last fight in Matrix Reloaded. It would be nice to see Superman take the title back.

02:25
Aww man, it looks like Zod does just have the big planet drill thing from Star Trek. Hope it’s building to something more interesting than “destroy the world!” and I really hope this isn’t also what happened to Krypton, as that would be even lamer.

02:36 – 02:46
Superman in custody (betcha this is where “Oh yeah, the cuffs are actually useless” goes) answering questions from Lois, being overseen by military. Cute banter, Adams and Cavill clearly have chemistry. Love that this Superman smiles, laughs, has a sense of fun about himself. There’s always this worry about Superman not being “relatable” to an audience. One way to fix that? Show the audience that he has as much fun having godlike powers as they think they would.

The actual dialogue being spoken here? Less interesting. Yes, the comics have done the “The S is actually a Kryptonian symbol for ______” business before, but I really hope we’re not going to get a lengthy Batman Begins-esque breakdown for every aspect of the Superman costume and persona.

02:49
Always end on a high note: In this case, Superman punching a guy several miles, then zooming up to punch him several more miles. Approved.

Man of Steel opens June 14th, a little under two months from now. If it’s a success, it’s supposedly being set up as the start of a DC Movie Universe in the spirit of Marvel/Disney’s Avengers experiment. This could still go either way, but right now I’m more encouraged than I had been.