Iron Man 3, the first movie to take place in the post-Avengers Marvel Universe, dropped its first trailer this week. Let’s go through it and see what’s what.

00:00 – 00:11 Beaten, bloodied good guy falls on his back amid a “dreamlike” (read: self-consciously artificial) blue-tinted snowy night. Yup, this is a Shane Black movie.

00:12 – 00:15 Hmm. Strange to still see the Paramount logo come up. Marvel/Disney is supposed to own all the movies from Avengers onward outright … or does that not apply to this one because it was greenlit and in pre-production well before the transfer was finalized?

00:16 – 00:18 Tony Stark greets the media, not looking as thrilled to be doing so as we’re used to seeing. Absent anything else to say about these two seconds, I’m given to wonder how nifty it’d be if this hadn’t happened and there was instead a vague possibility that some improbably young-looking kid was going to stumble out of the crowd, partially blind Tony with a flashbulb and stutter “… comment for the Daily Bugle, Mr. Stark?”

00:19 “Nothing’s been the same since New York.” Beware of inferring plot points from trailer narration culled from spoken dialogue that doesn’t show the actual scene where the line is being said, since a good editor can make anything seem to mean anything. That said, the inference – in this trailer, at least – is clear. Yes, folks, although the Iron Man movies are themselves closer to sci fi-inflected Tom Clancy thrillers, we are still freely acknowledging that this one takes place after the main character fought off an alien invasion alongside the Norse God of Thunder, a radioactive ogre and Captain America.

I imagine the film itself will be making a mighty effort to keep Avengers at arms length, lest questions of “Why don’t you just call your invulnerable green rage monster friend to help?” intrude upon the suspension of disbelief, but I like the idea of acknowledging it and I love the idea that maybe having been through all that insanity is what’s left Iron Man a bit shaken, unsure, etc.

00:20 – 00:23 Stark makes an Iron Man gauntlet power up and fly onto his hand from across the room. Important note #1: He appears to be doing this without those homing-bracelet thingies from Avengers. Important note #2: Just before it fades out, you can see the armor “spreading” down his arm. Well! It’s been widely-rumored before, the cat’s out of the bag now: They’re doing some version of “Extremis”.

To briefly explain, “Extremis” was the big “new status-quo” story for Iron Man in the comics back in 2006. The name refers to a radical nanotechnology procedure that turns Stark into, more or less, a full-fledged cyborg able to bond with his armor on a direct physical and mental level. He also has the ability to access and manipulate any computers and technology within his psychic range.

In the comics, Extremis was yet another unsuccessful attempt to replicate Captain America’s Super Soldier Serum. In this movie? Who knows? It’d be nifty if it was tied back to one of the potentially body-altering events inflicted on Stark during Avengers (zapped by Mjolnir’s lightning, influenced by a magic scepter, briefly devoured by a giant space whale, crossed over into another dimension).

00:25 Stark looking sullen in bedroom, pieces of armor all over the floor. File this one away for a moment, we’ll come back to it.

00:28 Don Cheadle, returning as James “Rhodey” Rhodes, aka War Machine. I really hope the question of where, exactly, “Iron Man but with way more guns” was during Avengers is raised but then snarkily brushed off and never mentioned again.

On a side note, I actually overheard at the conclusion of an Avengers screening someone ask, “Hey, how come they didn’t call up Black Iron Man?”

00:29 – 00:30 Ruined bunker, shadows blasted onto the walls like at Hiroshima. In “Extremis,” a new bad guy got experimented on with the nano-virus before Stark used it. Is this the site of that?

00:33 Guy Pearce as Alrich Killian, an important character from the original Extremis story. Back when Marvel was playing coy about who the bad guy would be in this, people thought he’d be the main heavy. According to Pearce, it’s more of a cameo.

00:34 The new, more gold-heavy, presumably Extremis-oriented Iron Man armor. I actually like it, though once people started pointing out that he looks like a can of Vanilla Coke I can’t stop seeing that.

00:35 For those keeping track, this is the first time in the trailer that Downey’s dialogue has actually been part of the scene depicted.

Remember, at 00:25 we saw the same bedroom with pieces of deactivated armor all over the floor. Was that actually the aftermath of this scene?

If so, the implication is that the armor, post-Extremis, was up and acting on its own and Stark had to deactivate it right there (though apparently not before Pepper stormed out). There are two immediate explanations for this: Either a villain can take control of the armor remotely; or “Iron Man” the mechanical suit, now infused partially with human intelligence, is acting as a separate entity from “Tony Stark” the human being. This has been a plot element a few times in the comics, but it’d be an exceptionally big and interesting twist here. Is the suit artificially intelligent? Or, more unnervingly, is it somehow channeling Stark’s own subconscious (as in, is it grabbing Pepper’s arm off him the suit’s over literal interpretation of “I have commitment issues?”) If that’s the big central conflict of the movie – who’s in charge, Tony Stark or Iron Man – color me interested.

00:42 – 00:45 Silence, and then … BOOM! Exploding earlier-model armors. Bad guys? Or, maybe, is self-aware Extremis having it out with his predecessors?

00:47 A flowing jade robe, trimmed in gold, worn by a man with a distinctly Oriental-looking topknot hairstyle. No. No, it couldn’t be … 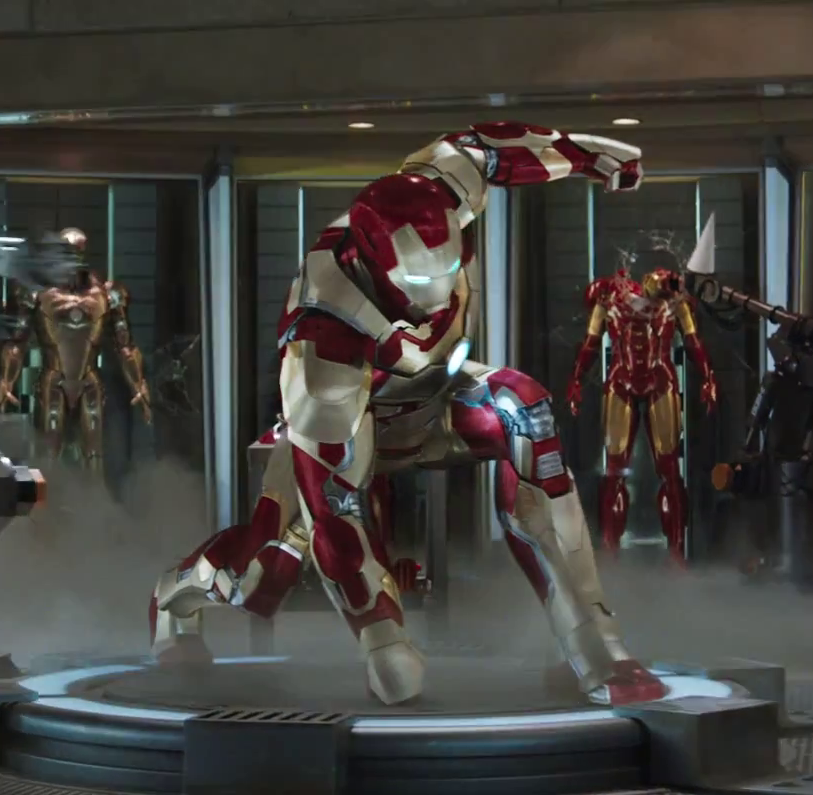 00:48 Rebecca Hall as Dr. Maya Hansen, another fixture from the Extremis series.

00:49 – 00:50 This patriotic-flavored suit of armor is yet another big import from the comics, where it’s referred to as the “Iron Patriot” armor. Here’s the short version: In the aftermath of a Skrull Invasion, the U.S. government turned control of The Avengers, etc. over to a cabal run by Norman Osborne (yes, as in The Green Goblin) who took to wearing an Iron Man suit repainted with Captain America colors as a public relations move.

Obviously, Norman Osborne isn’t going to be in this movie, but so far there’s no official confirmation on what function this suit serves in the film. The persistent rumor is that it’s a new and improved paint job for War Machine (it has War Machine’s shoulder-mounted gun), which actually makes a lot of sense and could be amusing regarding The Army giving their Iron Man a bandwagon-hopping Avengers-mania makeover. On the other hand, if this is a new bad guy I look forward to Stark getting really pissed at him for wearing his teammate’s colors.

00:51 Happy Hogan (Jon Favreau, director of the first two movies) has been through some kind of explosion. Uh-oh – is somebody getting Coulson’d?

00:53 Stark in the hospital, stuck with what look like acupuncture needles. Extremis process?

00:54 – 00:56 Iron Man rips open a plane, then… saves the people who get sucked out? Okay, context would be nice, but looks like an impressive action beat. An as-yet unidentified narrator says, “Some people call me a terrorist.” Hmm …

00:57 Pepper in trouble. Thus far the movies have largely avoided that “hero’s girlfriend in peril” stuff, so maybe they were due.

You’ll remember that was the name of the totally-not-Al-Qaeda terrorist group in the first movie, but these are ten actual rings. And that can only mean one thing.

00:59 The self-driving(?) armor from earlier attacks Tony Stark. I’m going to reiterate that I really, really hope this turns out to be “the good guy fights his inner demons, literalized.”

01:00 – 01:02 Mystery woman kisses Tony, mystery armor slams Tony through a table, Iron Man(?) emerges within orange fog, green robe guy has a pistol. Looks cool, who knows what any of it means?

The Mandarin is Iron Man’s #1 arch-nemesis in the original comics, a crimelord and would-be world conqueror of British and Chinese ancestry with a fixation on Genghis Kahn (the terrorist leader of The Ten Rings in the first movie had the same hangup) who affects the persona of a wizard, but whose powers are actually extraterrestrial in origin. He pilfered his Ten Rings of Power (each Ring does its own trick: Ice, Fire, Lightning, White Light, Black Light, Mind Control, Disintegration, Wind, Impact and “Matter Rearranger”) from a crashed alien ship.

Even apart from the Rings, he’s usually depicted as extremely formidable, able to fight Iron Man hand-to-hand – and win! – simply by virtue of martial arts expertise and mastery of chi. In the pantheon of “big threat” Marvel Villains, he’s easily right up there at the top with folks like Doctor Doom, Kingpin, and The Red Skull.

… and I never really thought I’d actually see him onscreen.

The thing is, as great of a bad guy as he is, the comics’ version of The Mandarin is kind of problematic – a relic of an earlier time when the “sinister Asian stereotype” was still an acceptable basis for a villain. The overt “Yellow Peril” aspect of his character has been mitigated over the years, but I still have to imagine a direct translation of him would raise eyebrows with 21st Century audiences who don’t have a prior history with him like longtime Marvel readers do. Also, there’s a more practical concern, as Iron Man 3 was shot partially in China in cooperation with the Chinese government with an eye on securing a big opening in China’s booming moviegoer population, and a good way to not get those things is to feature a specifically Chinese villain being bested by a Western hero.

So, yeah, he’s clearly not Chinese here (for the record, Kingsley is of mixed British and Indian heritage) but next to nothing has been revealed about what his background is otherwise. The low-level members of The Ten Rings terrorist group seen in the first film were of nonspecific Middle Eastern origins (or at least appeared to be) so setting Mandarin up as essentially “supervillain Osama bin Laden” makes as much sense as anything else.

01:09 And here’s why I felt okay about devoting all that space to The Mandarin. This is pretty much the whole rest of the trailer – a fleet of choppers blast Tony Stark’s coastal home into oblivion. One has to assume this is a longer, more complicated sequence in the actual movie; but they’re still showing us an edited version of the whole thing here which is unusual for what’s obviously a big moment in the story. The likely scenario is that this is the “money” scene with the closest to completion special effects they have right now.

01:12 By now, everyone is used to Marvel trailers intentionally including shots meant to get frame-by-frame reports like this one excited about easter egg “clues.” In Iron Man 3‘s case, some – like this dashing rascal, for example – have thus far focused most of their attention on why The Mandarin appears to have a Captain America tattoo on his neck. But, for me, the true ultimate mystery of this trailer is revealed right here, in the background at the base of the stairs …

… Why does Iron Man have a gigantic stuffed bunny in his house??

01:46 – 02:01 Tony Stark dragging his burden – literally – behind him in an act of self-punishing penance tinged with blunt religious allegory. Yup, this is a Shane Black movie.

PlayStation Plus Pays Off for Sony