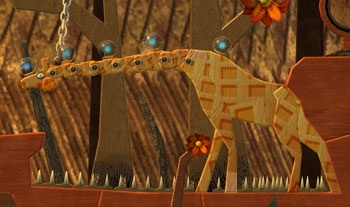 Media Molecule has a hit on its hands, and all the problems and headaches that go along with it. Having assembled a minor to medium phenomenon on the PlayStation 3 with the release of Little Big Planet, a game burdened already with high expectations, the developers now appear to be sweating in the spotlight, conflicted between concerns about intellectual property litigation and satisfying the unpredictable whims of a consumer base with a game that must rely in large part on community participation.

Amid the conflicts, over-reactions and mandates that are even now still roiling between creators, consumers and corporations, we have a perfect example of an issue sure to continue troubling the gaming industry for the foreseeable future. Where is the balance between fair use and infringement? Who is responsible for illegal actions, the offender, the provider of a medium or both? How can game developers serve the desires of creative individuals while simultaneously being the de facto protectors of every intellectual property on the planet? Is client-supplied content ultimately doomed in the current litigious climate?

There is a balance to be made somewhere between protecting intellectual properties from for-profit exploitation and getting into a litigious frenzy where even paper manufacturers are sued because someone used their product in plagiarism. The current legislative needle between those two extremes seems stuck in a hopelessly constant state of flux, and it is understandable that technology companies find exposure to litigation in a post-Hot-Coffee world anathema. In that sense, the bravery of Media Molecule to even create such thorough world creation tools is laudable.

Their handling since launch is much less laudable.

Normally, it is at this point that I’d be inclined to forgive the heavy-handed nature of the company’s user content moderations, which have been largely and loudly criticized over the past week. I am well aware of my tendency to at best sympathize with the practicalities of doing business in a litigious society and at worst be a blatant corporate apologist. After all, I’m still mostly comfortable with the necessity of DRM on the market where it makes reasonable accommodations, but even coming from that mindset I’m uncomfortable with how Media Molecule has handled its decisions to eliminate user generated content.

What I don’t know is whether this is a mandate from the developer, or if there are influences from outside the company up to and including publisher Sony. I find it difficult to square the company that would create such free-form tools with the mindset it has apparently displayed since release, but the real trouble here is not entirely in action but in the significant lack of communication.

I suspect that the community outreach blackout has to do with a lack of a cohesive message, which probably means that the people outraged by the unilateral actions in forums around the web have at least a few significant voices echoing their sentiments within the machine. I have little doubt that people who would be so committed to creating a user-dependent game will be resistant to the kinds of heavy handed deletions we have seen stirring up controversy. After all, much of the needlessly moderated levels seem like precisely the kinds of content they had encouraged all along. 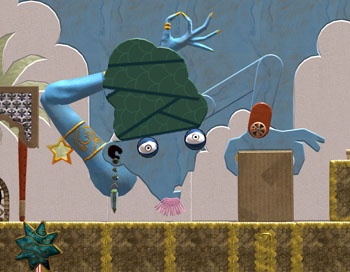 So, what we really lack at this point is a clear indication of from where the decisions about moderation and deletion of user content are coming. But, for consumers that really isn’t the issue, and while I have my own suspicions on the matter, the lack of communication in total is the insult added to the injury of summary deletions. Not only is it a dramatic over-reaction to a problem that doesn’t exist, it also is a slap in the face to creative users who invest hours or days into their effort.

In an industry already walking the line on being openly hostile with its consumers, it’s hard to perceive the actions of Sony or Media Molecule with much sympathy. Regardless of who is ultimately at fault behind the fortress that has been erected around Little Big Planet, the fact that edicts are being delivered as if from on high isn’t just a detriment to the overall mood of gaming consumers. It is a death sentence for a brilliant game.

You can not with one hand encourage customers to engage in creative exercises that demand significant assets of time and effort, and then with the other hand wipe those efforts out of existence with no recourse and expect a community to thrive. I respect the need for insulation from costly litigation, and lord knows IP lawyers for globally recognized properties probably spend large chunks of their day just hunting around for people to sue, but in a damned if you do, damned if you don’t kind of world you could do far worse than keeping players informed and aware of where the line is drawn.

I sympathize with the frustration publishers and developers must feel in the inconsistent messages being sent by a judicial system that hasn’t really figured out how to reconcile traditional thoughts of intellectual property with the digital age. And, I realize that there is the need for some patience if we want to see game makers continue to pursue involving consumers in content creation, which is why I am not saying that Media Molecule or Sony needs to keep their hands out of gamer created levels.

What I am saying is that the cone of silence is a disservice to everyone. Figure out where the lines are drawn, build a cohesive message and begin letting Little Big Planet fans know where you stand and what they can expect. I know that were I creatively minded, there’s no way I would consider wasting hours or days on an ingenious level only to risk seeing it deleted without comment. For a game built upon user-generated content, that’s a bad kind of opinion to engender.