English Actor Warwick Davis has been making movies for a long time, which is no mean feat considering that, because Mr. Davis was born with dwarfism, the number of roles available to him in most film productions would appear to be seemingly limited.

He made his debut as a child playing the Ewok Wickett in Return of The Jedi, and so endeared himself to producer George Lucas that he soon conceived Willow (a fantasy/action film with a little person as the main hero) as a star vehicle for the young performer. Though the film, made almost six years later, was not a commercial success at first, its eventual ubiquity on home video helped turn Davis (who continued to work steadily in film and television) into an unlikely cult celebrity. Today, he continues to work in film, reality television, publishing and has co-founded Willow Management, a talent agency that specializes in finding employment for height-challenged actors.

But it was in 1993 that Davis created what would become perhaps his most iconic (and certainly longest-lived) character: the title role in a low-budget horror film called Leprechaun. The movie itself? Forgettable, a classic case of a project whose creative spark began and ended with the one-sentence original concept. But Davis’ singularly maniacal performance turned his titular Irish demon into an instant pop culture icon who became a sought after guest for youth-targeted broadcasts and went on to star in five sequels (and counting!).

So, since this weekend brings us St. Patrick’s Day, let’s look back at the pieces of this unlikeliest of long-running franchises; all of which, uncoincidentally, probably play best when viewers are in an inebriated state.

Sometimes all it takes is a great hook and a great poster, particularly in the early 90s, when the video store reigned supreme and low-budget indie exploitation films could talk Mom & Pop outfits into giving their wares big promotional pushes in exchange for a better rate-of-return than the higher ticket Hollywood product. Leprechaun came and went from theaters fairly quickly, but its key art, a short, monster faced ghoul in caricatured “Olde Irish” garb peering out from a doorway under the tagline: “Your luck has run out!” was tailor-made for the video market, where it quickly became a cult sensation. Even more so when leading lady Jennifer Anniston became a megastar on Friends soon after.

The movie supposedly began as a mock-scary monster flick for children only to be beefed up to an R rating with new dialogue and extra gory insert shots when the studio realized it might actually work as the real thing. The aforementioned poster is literally the entire joke and thus the entire movie, “Wouldn’t it be funny to plug the generic details of Leprechaun mythology into a formula horror movie?” It’s clever in spots (The Leprechaun is chasing down the hapless folks who he believes stole his pot o’ gold, has a Kryptonite-like aversion to four-leaf clovers, etc.), but aside from how fun Davis is in the role, it’s actually kind of a tough sit. Though it’s still easy to see how it garnered its “I can’t believe this is a real movie!” popularity at the time.

Becoming a college culture party tape unexpectedly turned The Leprechaun into a horror icon right up there with Freddy and Jason, so not only did a sequel get made it got a much bigger theatrical release than last time. It’s a better looking, better paced movie but some of the genuine-schlock vibe of the original gets lost along the way.

This time around, Leprechaun is in Los Angeles for St. Patrick’s Day, scheming to abduct a young woman and make her his bride as part of thousand year curse visited on her family because … well, okay, it’s really just so they have an excuse to have Leprechaun cackle, “Kiss me, I’m Irish!” for the trailer. This would be the last of the series to make it to movie theaters.

No direct connection, aside from the character, is made to the previous film. Supposedly there is a continuity to the series and this second film is really Part 5. Incidentally, this was the first of the series to get a big video release in the United Kingdom, where it was retitled One Wedding & A Lot of Funerals in reference to a then-popular Hugh Grant movie.

Part 3 is the first of two Leprechaun installments to be directed by veteran Australian horror/action legend Brian Trenchard-Smith (whose filmography belongs on the must see list of every well-versed cinephile) and, not coincidentally, was easily better than the first two. It’s got much more creative kills and extreme gore effects to help the rest of the goings on measure up to Davis’ by now effortlessly over-the-top performance. 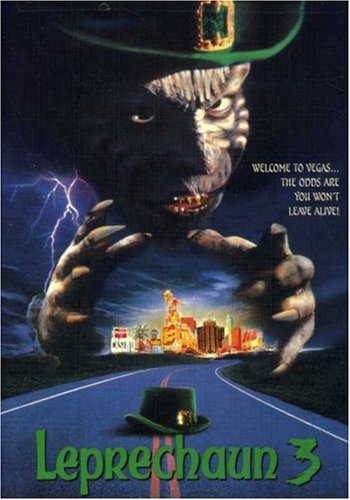 This time around, The Leprechaun is loose in Las Vegas, hunting a lovesick young man who has found one of his stolen gold coins and is using it to wish himself through a lucky streak. The wish bit is inspired, as it allows Leprechaun to work the old “Monkey’s Paw” routine, ironic wish-granting on unsuspecting victims. It also introduces a new wrinkle about people turning into Leprechauns themselves after being bitten by one, which hasn’t come up again in the series.

Brian Trenchard-Smith returned to the director’s chair for Part 4, which carries the original joke of “otherwise standard genre movie but with a Leprechaun” to the next logical extreme, casting The Leprechaun as the antagonist of your basic R-rated space opera and having nobody find it all that unusual that their foe is a magic Irish mischief demon. All told, this is probably the best of the Leprechaun movies.

Your basic team of space marines are dispatched to rescue a kidnapped alien princess from The Leprechaun, who appears to have his own planet and steals aboard the marines’ ship after the supposed rescue. As it turns out, said princess, who’s actually pretty villainous in her own right, is actually sought by the ship’s head scientist for the mysterious healing powers possessed by her species. Further troublemaking by the title character leads to murder, mayhem, cross-dressing cyborgs, human/spider mutations and a climax where survivors battle The Leprechaun after an enlarging ray turns him into a towering giant (a sequence I’d like to imagine Warwick Davis enjoyed at least as much as I did).

I was working in a Blockbuster Video the day the first solicitations for this one came through. That was a day, my friends, that was a day. Sending an iconic horror antagonist, most of whom famously menaced mostly white suburban and/or rural teenagers, into a mostly black urban neighborhood is such a simply brilliant pitch for shaking up the formula. It’s kind of amazing that The Leprechaun got there first as opposed to Freddy or Jason. Too bad the movie wasn’t better.

Ice-T (post-serious actor phase, pre-Law&Order phase) is a powerful and corrupt hip-hop mogul whose dark secret is lacing his tracks with beats sampled from a Magic Flute to make them popular. The flute, of course, was stolen by said mogul from the (once again imprisoned) Leprechaun. When a group of aspiring young rappers attempt to steal the flute for themselves, the creature is unleashed and tears up the ‘hood looking for them. It goes about where you’re expecting and yes, Leprechaun smokes weed, yes, Leprechaun raps, but a visibly diminished budget keeps it from being anywhere near as fun as Parts 3 and 4 were.

For some reason, there’s a widely accepted fandom theory that says this film actually takes place before all the others, but I never quite figured out how.

Probably thanks more to the title than to the film itself, In The Hood actually turned a solid profit on video, so this sixth(!) installment went into production. Originally set up with a “Leprechaun goes to Spring Break” premise in mind, the producers ultimately decided to continue with the urban setting once more and in doing so delivered the movie I’d been hoping to get from Part 5: A classic formula slasher flick freshened up by transposing it into a mostly black inner-city neighborhood (and by adding The Leprechaun, of course). It even features a prologue that provides as close as we’re probably going to get to an official origin story for the by-then decade old character.

The main plot is more or less a reworking of the first film: A preacher in an impoverished neighborhood has stolen The Leprechaun’s pot o’ gold in an effort to fund construction for a Community Center, and meets the expected grisly fate, but only after managing to hide the gold and magically imprison the Leprechaun. One year later, some local youths find the gold and hope to use it to turn around their various not terribly hopeful circumstances, only to find themselves subsequently hunted by the now-freed monster.

It doesn’t exactly rewrite the book on horror sequels, but it’s a big improvement over Part 5 and if nothing else it’s fun to once again see Leprechaun back in a movie where he’s the only character who seems to know it’s supposed to be funny.

As if by fate, shortly after this retrospective was first written, it was surprisingly announced that the Leprechaun series is being rebooted by, of all people, WWE Films (yes, WWE as in the pro-wrestling organization). No casting announcements have been made, though fans are already speculating that it will be a star vehicle for WWE performer Dylan Postl, a little person athlete who wrestles under the name “Hornswoggle” and sometimes appears in Leprechaun style costume.