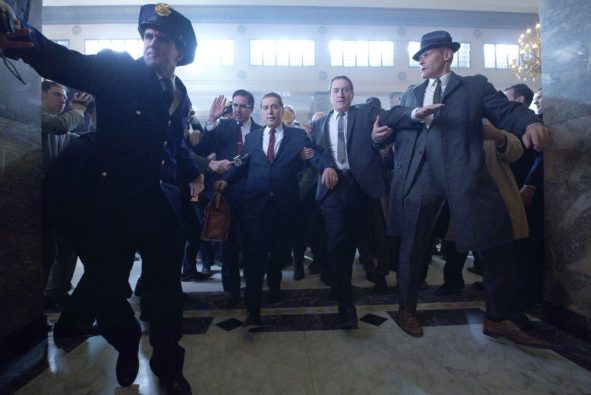 The trailer comes hot on the heels of the announcement that the movie will be opening the New York Film Festival this year, kicking off what is sure to be a heavy Oscar push by Netflix as they try to top the success they had last year with Alfonso Cuaron’s Roma. Netflix reportedly paid around $105 million just for the rights for the film, which they will be releasing theatrically before it lands on the streaming service so they can qualify for awards. The acquisition was a major boon for the streaming service and heralded their growth into a serious filmmaking studio, not just an also-ran.

The film itself sees Scorsese returning to the subject matters that he does best: criminals and politics. Based on the nonfiction book I Heard You Paint Houses by Charles Brandt, it follows mob hitman Frank Sheeran (De Niro), who, by his own admission, killed 25 people for the mob over the span of decades, including Jimmy Hoffa. The story spans those decades and sees Pacino play Hoffa and Pesci play mob boss Russell Bufalino.

Netflix held a press event and showed off some scenes from the film that seem to confirm what the trailer shows: This is Scorsese in his wheelhouse working with an actor he’s had a long relationship with. De Niro and Scorsese, in fact, were so keen on making The Irishman that they ditched another mobster film based on the novel The Winter of Frankie Machine they were working on at Paramount for it. Looks like that paid off in spades for Netflix.

The Irishman will get a most-likely limited theatrical release this fall, followed by its release on Netflix.