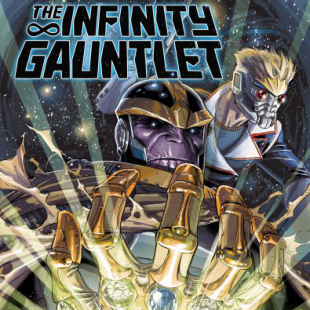 A new version of Marvel’s The Infinity Gauntlet is being co-written by Gerry Duggan and Dustin Weaver.

Beginning this May, Marvel will be releasing a new version of its classic Secret Wars storyline. Aimed at combining and reshaping the Earths from Marvel’s 616 and Ultimate universes into a single functioning world, it looks poised to be one of the biggest comic events of 2015 and easily the most significant thing that Marvel intends to do this year. That being the case, the company has announced yet another feather in the cap of Secret Wars: a new version of the 1991 event comic The Infinity Gauntlet.

Co-written by Gerry Duggan and Dustin Weaver, the new Infinity Gauntlet will follow a young woman named Anwen Bakian who, in tow with her father, sister and grandfather, lives a desperate life in a post-apocalyptic wasteland searching for food and evading giant mutant bugs. Anwen’s life takes a turn, however, when chance leads to her to find an Infinity Stone, a discovery that soon brings her and her family into contact with the villain Thanos.

Despite the mad titan’s involvement, the writers are hoping to keep the book focused on the core of Anwen’s experience. “Anwen is the reader’s lens into this world, and having written another young hero for Marvel, I can tell that inexperienced characters are a real gift. They make mistakes … and may trust the wrong characters,” said Duggan. “[Anwen’s] a hero with just as many problems in her personal life as she’s got while she’s adventuring. Those problems are intertwined in this series.” Duggan would go on to describe the story as a “post-apocalyptic-coming-of-age-action-adventure yarn.”


Weaver and Duggan have also promised that the book won’t just be a rehash of the original Infinity Gauntlet story. While the new comic will “reuse some old ideas and characters,” readers can still expect a fresh book full of “brand new concepts.” How it plays out and the greater role it winds up having in the wider cosmic storylines of the future Marvel Universe is something we’re excited to see.