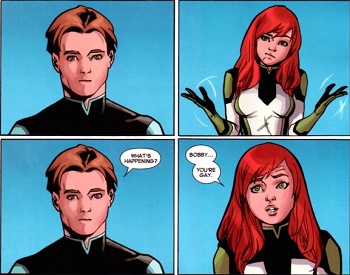 Marvel’s Editor-in-Chief Axel Alonso says that Marvel “would be foolish” not to fully explore the meaning of the X-Men’s newly gay teammate.

Yesterday, Marvel made headlines when leaked pages from the upcoming comic All-New X-Men #40 revealed that the young, time-displaced version of Iceman is, in fact “full gay.” It was a revelation that left many (the comic characters included) confused while others felt outraged both over the decision and writer Brian Michael Bendis’s arguably clumsy execution of the outing. That being the case, both Bendis and Marvel Editor-in-Chief Axel Alonso have offered statements aimed at addressing the concerns of the company’s fans and readers.

Speaking about the subject in an interview, Alonso tried primarily to assure fans that Iceman’s sexual orientation didn’t derive from any sort of “editorial edict” and, rather, that it was a story pitched by Brian Michael Bendis that convinced the publisher to run with the idea. “This is a character with decades of history, and one who we’ve seen falter on the romantic stage – more than once. So the seeds were always there,” he said. He further affirmed that the question of adult Iceman’s (it was a younger, time-displaced version that came out of the closet) sexual orientation will also be answered as the plot moves forward. “We would be foolish not to deal with that.”

Bendis, meanwhile, writing in a post on his Tumblr tried to offer clarity about his opinions on bisexuality, which some questioned due to some of the terms and phrasing used in the scene where Jean Grey outs Iceman. “I’m super bummed that some people are reading any sort of bi erasure and biphobia into the interaction between Bobby and Jean,” he wrote. “If anybody reading the horribly scanned leaked pages even thought that for a second please free your mind of that. It’s not there.” He would go on to say that “this is just the first part of a larger story” and that fans should look forward to Uncanny X-Men #600.

Speaking personally, I would agree that the scene shown in the leaked pages definitely wasn’t handled as well as it perhaps could have been. That being said, Bendis is generally a strong writer and if he can use Iceman being gay as fodder for a good story that makes sense in the context of the character’s history, then why not go for it? It’s not like there will be a lack of straight characters in the Marvel Universe as a result.