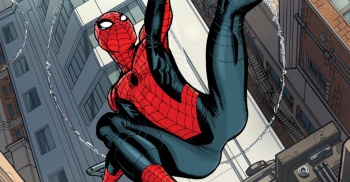 “Before He Was Amazing… He Was SPIDEY!”

Marvel has announced a new comic, Spidey, which will focus on a teenage Peter Parker as he balances his double life of awkward high-schooler by day, web-slinging superhero by night.

Marvel Editor-in-Chief Axel Alonso stated that the new comics will not be a re-telling of old stories, but rather will focus on adding more substance to Parker’s early years as Spider-Man.

“Everyone remembers their FIRST Spider-Man comic. SPIDEY aims to be perfect as someone’s first Spider-Man comic, or their one thousandth. We’re not looking to re-tell stories here. What Robbie [Thompson] and Nick [Bradshaw] have put together is an exciting new take on Spider-Man at his arguably most iconic incarnation, and will feel fresh to new and old fans alike.”

“Out of the 700-plus issues of Amazing Spider-Man, Peter Parker was only in high school for thirty issues,” said Spider-Man editor Nick Lowe. “Stan [Lee] and Steve [Ditko] covered a lot, but there’s a lot of the high school and early superhero experience still on the table.”

Spidey will be written by Robbie Thompson (Marvel’s Silk and television’s Supernatural), while art will be handled by Nick Bradshaw(Wolverine and the X-Men, Guardians of the Galaxy).

SPIDEY #1 will be available this fall.

8 Great PC Shooters from the 90s