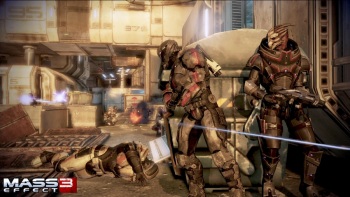 A Mass Effect 3 demo is coming in January, but Battlefield 3 buyers can get it even sooner.

Do we need a Mass Effect 3 demo? Not really. Just about the whole world is firmly ensconced in either the “can’t wait to get it” or “couldn’t care less” camps by now, and those few who remain uncommitted can get a full dose of the real thing with Mass Effect 2, which is easily available for about 20 bucks these days, or less if you dig. Now, do we want a Mass Effect 3 demo? That’s a whole different question.

For everyone who answered, “My goodness, yes” [and that’s probably a lot of you], here’s some good news: there will be a demo, it’s coming in January 2012 and it will include both single-player and multiplayer bits, so you can get a taste of both sides of the coin.

And what if you don’t want to wait until January? No problemo! Just pick up Battlefield 3 on any platform – new, not used, thanks – and you’ll automatically be given early access to the multiplayer part of the demo when you activate your Online Pass.

And what if you hate Battlefield 3? No problemo! Another early access offer for those who love Mass Effect but hate everything else will be announced in late November or early December.

Specific release dates for the demo, both regular and early access, will be announced in late November, as will the length of the early-access period. The early-access demo will be strictly multiplayer, while the single-player component will be available to all players on the day it launches, in all regions in which the game itself is coming out. For more information [or if you just want to read messages from people who are angry about this for one silly reason or another], hit up the BioWare Social Network.

Doom 4 is Not Postponed

Keep Your Coat On and Your Wallet Closed