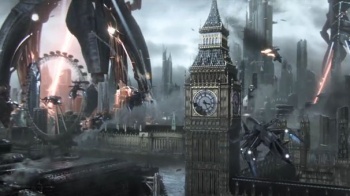 A pile of new ME3 info has been released, revealing Shepard’s newfound appreciation for fisticuffs, some new locations, and Space Ninjas.

After seeing the first trailer for Mass Effect 3, shown at last year’s VGA’s, we already knew that the game would be about the Reapers attacking Earth, and that we would finally get the chance to spend a little time on our home world. But London won’t be the only Earth locale to get the Mass Effect treatment; if the translation of Spanish videogame magazine MarcaPlayer is to be believed, New York City will also be featured (because it’s pretty much a requirement to destroy NYC every chance you get) in the game.

In addition to finally having access to our own blue marble, you will also get to spend some time on Mars, on the Salarian home planet, and on a Quarian moon. And once you’re there, a new class, focusing on heavy melee attacks, will allow you to dish out punishment on much more up-close and personal manner by utilizing new punches, kicks, and whatever a “SWAT turn” is. In addition to the new class, the existing Engineer class is getting the ability to build turrets in the heat of battle, which will no doubt spawn an endless stream of TeamFortress 2 references.

Shepard really just becomes a little more physical all around. The combat is said to be sped up by 10-15 percent compared to the last game, leading to faster, more intense combat. To help you survive, a new set of moves including jumps, dodges, and rolls can be used to get you into cover before you succumb to large amounts lead perforating your torso.

Damage will now be dynamic, so your attacks will have more of a visible affect on your enemies, and “hitting the weak spot for massive damage” will become an option against some types of enemy units, like Cerberus’s mech walkers.

Speaking of Cerberus, the pro-human qasi-terrorist organization is back, and chain-smoking head honcho The Illusive Man is pissed at you for unexplained reasons. So along with fighting Reapers, Husks, and who-knows-what else, you’re going to have to contend with Cerberus mechs, assault units, and shock troops bearing a striking resemblance to ninjas.

Back from the first installment are weapon mods, which will not only alter the damage your weapon deals, but its look as well. While the mods won’t be quite as prevalent as they were in the first game, there will be five or so mods available for each part of the weapon.

Finally, perhaps the most exciting (and to me, potentially the coolest) part; unconfirmed reports that space battles will be possible. If I could take command of the Normandy and start yelling things like “Hard to starboard!” while Joker pew-pews some Reaper mooks, that would be … well, that’d just be great.

So there you have it. Space battles, space boxing, space ninjas, and dynamic space damage, if everything was translated from the original spanish correctly. The game will be out November 8th of this year for the 360 and PS3.