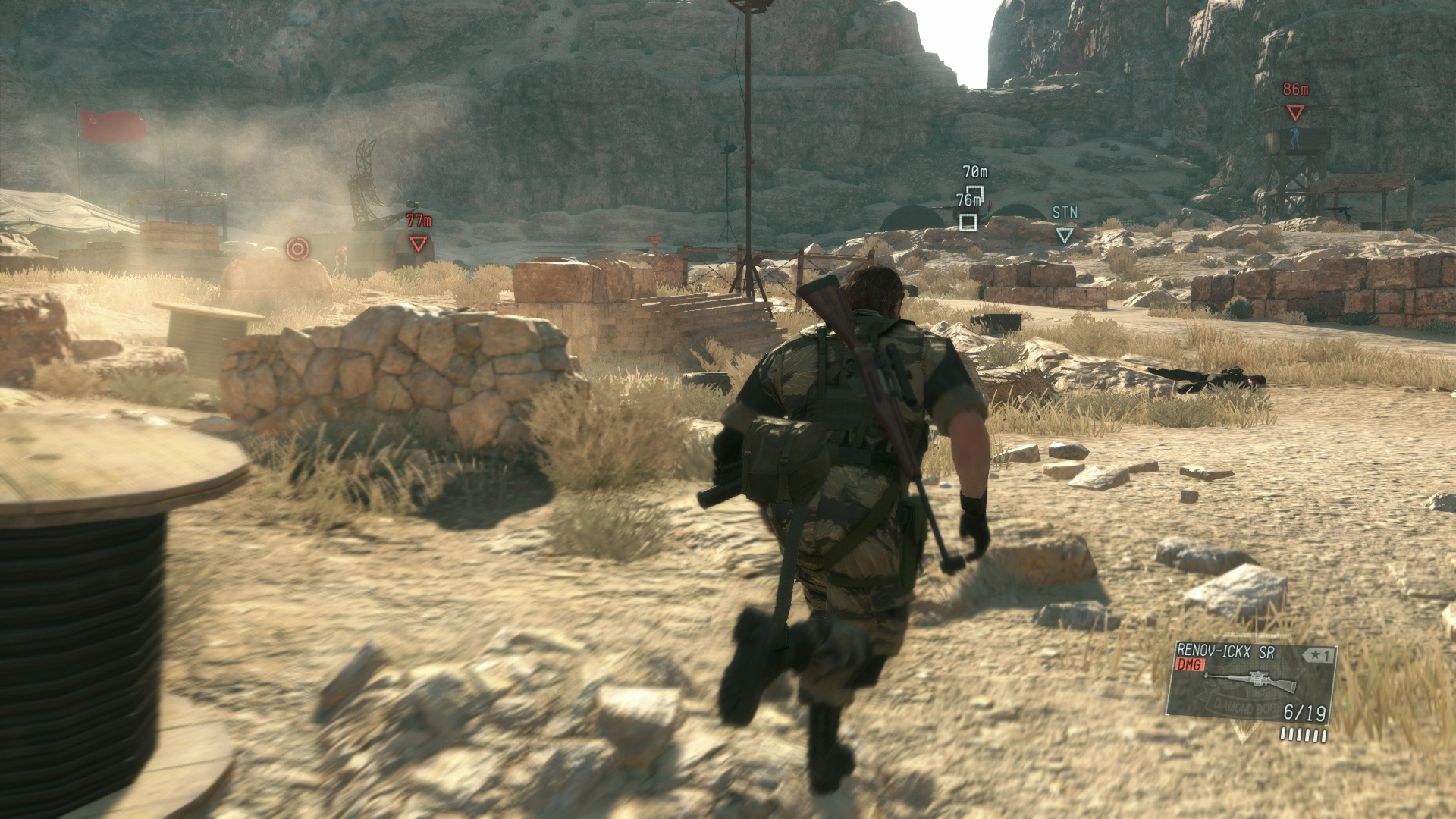 In March of last year, Konami released the controversial Metal Gear Solid 5: Ground Zeroes, the prologue chapter to the upcoming Metal Gear Solid 5: The Phantom Pain. It was controversial for several reasons, the main one being that it felt like a $40 demo, consisting only of a single main mission that could be beaten in about an hour, along with a handful of side missions that took place in the same level.

I mention all of this because in my two hours or so of hands-on time with The Phantom Pain, my biggest takeaway was how much I was reminded of Ground Zeroes. Only instead of infiltrating a military camp on Cuban soil, I was riding around a mostly empty desert, until I was eventually able to infiltrate a military camp on Afghanistan sand.

Now, before we go any further, let me just be clear that I liked Ground Zeroes. It was overpriced for the amount of content that it had, for sure, but I loved the open ended approach to stealth. I loved the feeling of being initially dropped into an unfamiliar setting, scoping out the environment from afar, gathering intel by interrogating enemies in the field, being able to spot my own landing zones to extract my targets once I pick them up, and having the freedom to hop into a vehicle even if it almost always ended in disaster.

All of these things that I liked about Ground Zeroes were present in my hands-on time with The Phantom Pain, but along with everything I disliked as well. Mainly, the repetition of getting placed in the same environment, but with a different objective over and over again.

The Phantom Pain differs from all of the previous numbered Metal Gear Solid games in that it adopts an episodic mission structure as opposed to the traditional method of linear storytelling. Once you gain access to Mother Base, an offshore plant turned headquarters for Snake’s personal Private Military Corporation, the Diamond Dogs, you’ll get the opportunity to choose between several main missions and side ops, each with their own objectives and rewards.

Of the four missions that I ended up playing, each of them took place in Afghanistan, and regardless of the objective, they all basically played out the same way. I would ride my horse to a waypoint set on my iDroid, stop at a spot that overlooked the base that I needed to infiltrate, mark all of the enemies that I could see, and then proceed to carefully crawl my way over to wherever I needed to go, sticking a tranq dart into any enemy that I couldn’t crawl past. Sometimes I would have to locate and extract a high value target, another time I had to assassinate a specific enemy that I had to first identify with my binoculars, and lastly was a mission that involved some tactical demolition.

If that sounds familiar, it’s probably because each of those types of missions was already something that you could do in a side-op in Ground Zeroes.

It’s also worth mentioning that the game absolutely does not hold your hand when it comes to finding out the location of the target that you need to extract. Your iDroid will give you a very rough estimate of where the target is located, but it’s up to you to search the compound extensively in order to find the target, a fact that I’m sure I’d have appreciated much more had I not been under time constraints to play through as much as I could.

After finishing a mission, you’ll return to Mother Base and can spend your hard earned funds, otherwise known as GMP, to purchase new weapons, items, and so on. You can also fully explore Mother Base and even customize it to your liking by bringing back items from the field using your Fulton recovery device. 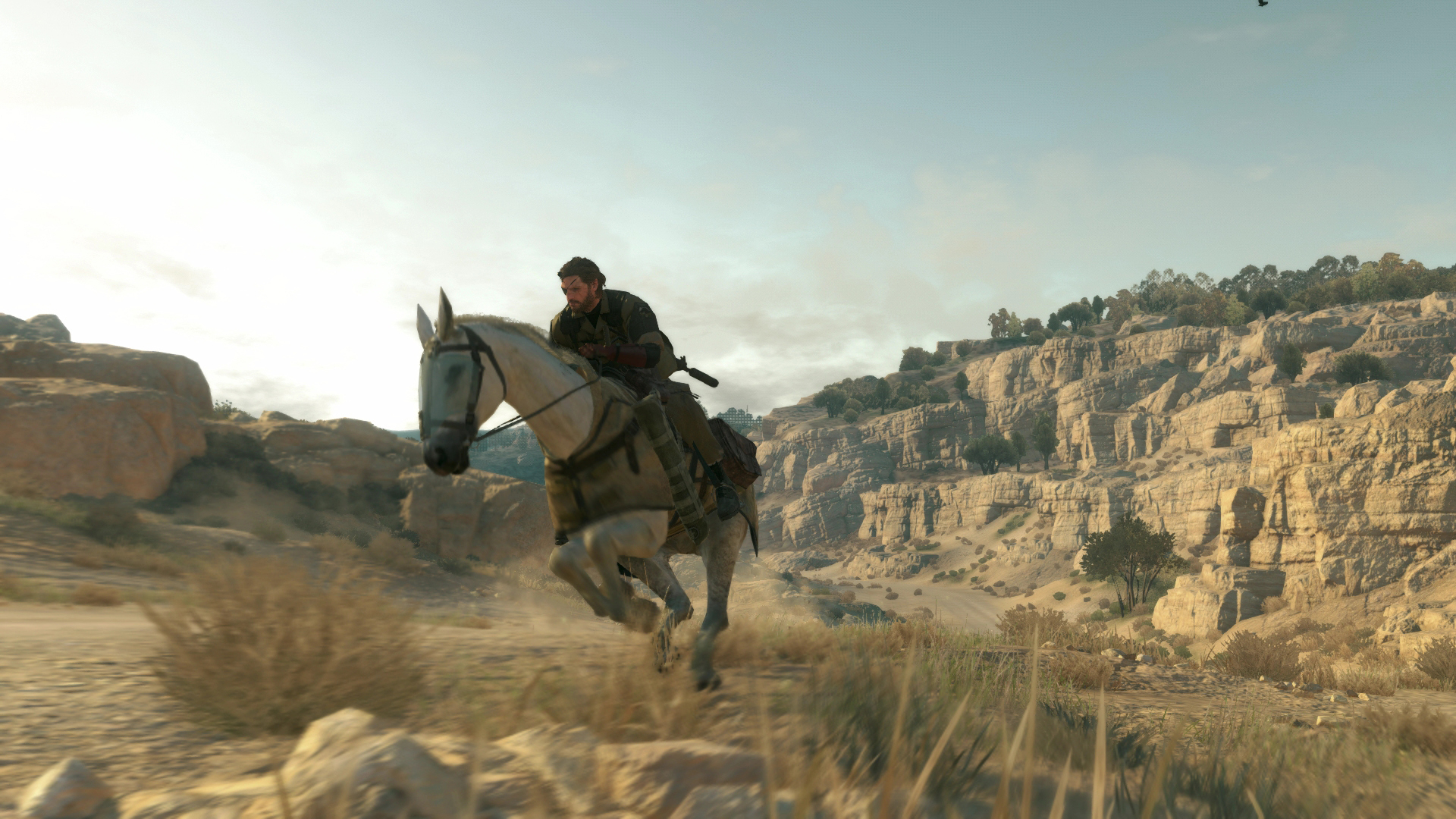 The Fulton was introduced in Peace Walker and is essentially a balloon retrieval device that you can attach to just about anything and have it skyrocket into the air, eventually finding its way back to Mother Base. While you can “fulton” wildlife, vehicles, cargo containers, and just about anything else you desire, the main use for the fulton is to retrieve unconscious enemies. Fultoned enemies will fly back to Mother Base, undergo some sort of reconditioning process, and then be assigned a job to assist Snake when he’s out in the field.

The more soldiers you assign to R&D, for example, the more items and gadgets you’ll have access to. In my playtime, the only item I was ever able to afford was the classic cardboard box, which has a few fantastic new tricks. In prior Metal Gear Solid games, your disguise would be broken if you did anything while hiding inside the box, but in The Phantom Pain, the box is much more versatile.

As you probably know, Snake has three movement types: Upright, crouched, and prone. Likewise, while in the box, you have those same three movement types. Running around while standing upright in the cardboard box is not the greatest for stealth purposes, but I can say first hand that it is amazing for diving face first down sandy desert slopes and tobogganing all the way down.

Moving around in the cardboard box while crouched is the standard way to go, but if you decide to suddenly break your cover and aim your gun, instead of just magically making the box disappear, Snake will pop out of it like a jack-in-the-box, allowing you to get the jump on an enemy who no doubt will be in sudden shock at the sight of a grown man, with a gun, popping out of a cardboard box.

Finally, going prone while inside the box will unfold the bottom part, letting your feet stick out, and allowing you to move quietly through the environment, with the ever present option of ditching the box and crawling away discretely.

Like always, the cardboard box is more silly than practical, but a tip of the hat to Kojima for going all out with it. I’m sure we’ll see plenty of entertaining playthroughs on YouTube of people doing entire runs centered around using the cardboard box as their main gadget of choice.

Kojima’s trademark sense of humor is present in other areas too. For example, in Mother Base, everyone who runs into Snake will immediately stop to salute their boss. Even if you were to smack them around, or choke them unconscious, the first thing they’ll do when they regain their senses is say “Thank you for that valuable lesson, Boss!” I’ll admit to laughing embarrassingly loud in an otherwise silent room of my peers a couple of times while messing with soldiers around Mother Base.

All in all, I walked out of my demo session with The Phantom Pain a little bit conflicted. Everything that I played was a lot of fun, but I wished that I had more time to further explore the Mother Base building mechanics, the item and gadget upgrade process, and the use of Quiet and D-Dog as helper characters.

Mostly though, I wish I had a chance to play more missions to hopefully alleviate my concerns of the repetitive nature of having to constantly go back to familiar environments in order to complete missions that felt mostly similar to the ones I just did.

All questions will be answered in due time, though, when Metal Gear Solid 5: The Phantom Pain finally hits current and last gen consoles, along with the PC, on Sept. 1.