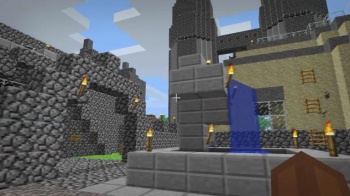 The creator of independent sensation Minecraft called in and spoke to the Loading Ready Run gang as they play Desert Bus.

If you’ve ever wanted to watch several Canadians squee on internationally broadcast internet video, then you should have been watching the Desert Bus for Hope live video feed about an hour ago. For those of you who don’t know, Desert Bus for Hope raises money for Penny Arcade’s Child’s Play charity by playing the Sega CD game Desert Bus for as long as people will donate. The whole process is broadcast over the internet and users can join a chat room and ask them to do funny things for a small donation. Today, a recognizable name popped up in the IRC chat and the crafty Paul Saunders had to ask, “Is this the real Notch?” In response, Markus Persson (aka Notch) used his Twitter account to say that it was in fact him. The Loading Ready Run gang then got him to call into the show and asked him all kinds of questions about Minecraft and his plans. Persson also donated $2000 to Desert Bus for Hope, which is just plain awesome.

“(I am _notch in the desertbus.org chat thingie)” Persson wrote on his Twitter feed to verify his existence.

Persson said that he was a big fan of Loading Ready Run and that he tuned in to watch some of their antic in last year’s Desert Bus for Hope marathon session. Talking quietly so as not to wake up his fiancée who was sleeping in the next room (it was the middle of the night in Stockholm, Sweden), Persson let loose a few nuggets about Minecraft. He programmed it in Java because that’s the computer language that he knew. A big update is being worked on as we speak, but he is also busy working on a new game.

All in all, it was a cool moment and it drew nearly all of staff in The Escapist office into the room that we have streaming Desert Bus for Hope to watch it unfold. Let that be a lesson to you, you should never stop watching Desert Bus. You never know who is going to call in, just today there’s been call-ins Gabe from Penny Arcade, me and Susan Arendt in addition to Notch.