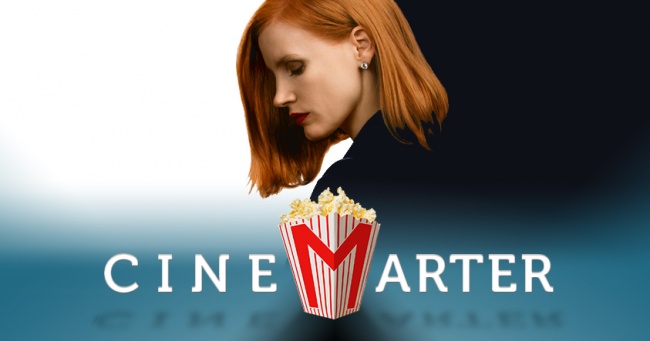 Miss Sloane is the lobbyist version of House of Cards. Our protagonist is a morals-be-damned woman whose only goal is to achieve victory, doing so through whatever means necessary – whether that means manipulating people close to her, withholding information, or finding as many political loopholes as possible. In other words, she games a broken and, in large part, corrupt system – all while masterminding a grand plan to reach the end goal. Most of the film is just people talking in political jargon and trying to position themselves ahead of everyone else.

Of course, given that the subject at hand is gun control, Miss Sloane is likely going to find a different and more divided audience. If you’re for gun control, it’ll be everything you’re looking for and more, with an intelligent and shrewd protagonist navigating the hardships of achieving such a goal. If you’re against it, you’ll note some flaws in the argument, get frustrated by the side its “good” characters wind up on, and ultimately dislike it. 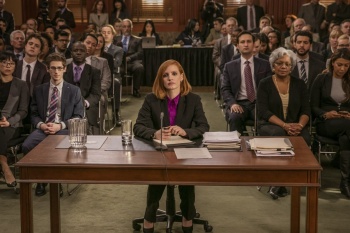 Elizabeth Sloane (Jessica Chastain) is our lead, working for a big firm at the start of the movie but leaving as soon as it decided to take the anti-gun control side of the debate. She leaves for a smaller firm and makes it her new goal to get a bill passed that would require future firearm purchasers to get more extensive background checks prior to the sale going through. The Gun Lobby outspends its opponents something like $30 to $1, so she’s got the odds stacked against her. It makes for a compelling tale, that’s for sure, even with politics aside.

You see, while Miss Sloane has gun control front and center for a lot of its running time, it’s not really about it. Its characters all pick a side, sure, but the movie’s about the way that lobbying works, about the depths to which political rivals will go to get a victory for their side, and about the dedication of a career-driven women to prove herself and step up to the place with, eventually, her entire career (and maybe even life) on the line.

[Miss Sloane] has great payoffs, wonderful pacing, and is just slick filmmaking from start to finish. And, of course, Jessica Chastain is phenomenal.

I don’t think I’ll ever get tired of watching smart characters at the movies, and almost everyone in Miss Sloane is intelligent – maybe appearing smarter than they are given the typical movie character’s intelligence. That’s both sides of the political spectrum, by the way; the movie might align itself, morally, with the Left, but it doesn’t paint (most of) its antagonists as evil incarnate – you know, like Sully did. In fact, one of its takeaway points is how both sides are basically equal when it comes to the tactics they use in order to win. The movie picks its side, but there’s a decent balance to the way it proceeds.

Director John Madden might not seem like the right fit for a political thriller – his last two movies were the two Exotic Marigold Hotels, and his most notable film is Shakespeare in Love – but he sure shows his detractors here. Miss Sloane is a slick movie that’s well-paced, doesn’t get weighed down in its mass of political jargon, and makes sure everything falls into place at the right time. There are a few moments where you begin to wonder when X is going to matter, if at all, and almost immediately after that thought crosses your mind – bam! – the movie capitalizes. Chekhov would be proud.

Miss Sloane would likely fall apart if an actor of Jessica Chastain’s talent wasn’t in the leading role. Chastain has had such a great last half-decade, and while this performance isn’t going to top the one from Zero Dark Thirty, it’s in a similar vein both in terms of quality and type. A non-nonsense, career-driven character whose exclusive focus is getting a job done? Yeah, Chastain is one of the best at that. And she’s so good at it’s easy to overlook the rest of the talent around her. I haven’t even mentioned anyone else, and this is a movie that co-stars Mark Strong, Gugu Mbatha-Raw, John Lithgow, Alison Pill, Michael Stuhlbarg, Sam Waterston, and Jake Lacy – among others! But we’ve got a movie that focuses on Chastain, and she turns in a captivating powerhouse performance, so we easily forget about the rest – all of whom are more than solid.

It’s likely that Miss Sloane is going to be enjoyed most by those on the Political Left. After all, it’s a pro-gun control movie. But it paints both sides rather fairly, and it’s even more about the way that lobbying works inside the framework of a broken political system. I hope that means that everyone will give it a shot. It has great payoffs, wonderful pacing, and is just slick filmmaking from start to finish. And, of course, Jessica Chastain is phenomenal. Miss Sloane is a wonderful movie.

Bottom Line: A great movie with an even better lead performance, Miss Sloane is a fantastic watch.

Recommendation: It’ll likely appeal more to the Left than the Right, but there’s enough there for everyone, I think. And, hey, even many on the Right want (some) stricter gun control, right? So there you go. See Miss Sloane.