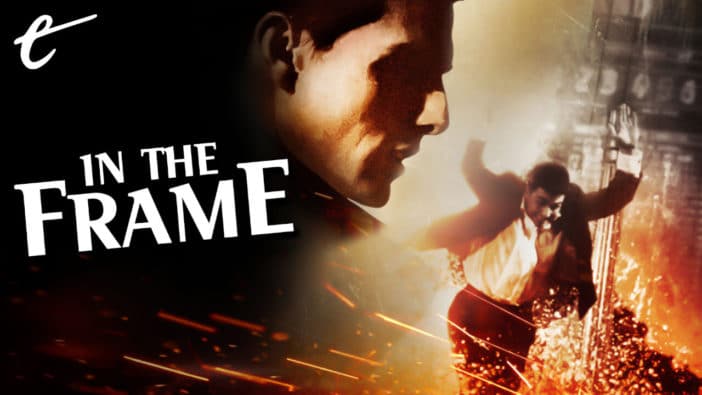 The first film in the Mission: Impossible franchise was released 25 years ago this May.

Brian De Palma’s Mission: Impossible is a fascinating cultural artifact, particularly when examined through the lens of the quarter-century of popular culture that has followed. Mission: Impossible was, of course, an adaptation of the classic television series, which ran for seven seasons on CBS from 1966 through to 1973. However, it was a bold franchise reboot, relaunching an existing property in a thrilling and provocative way that would never be tolerated today.

Of course, the term “reboot” had not entered the popular consciousness by May 1996. The first recorded use of the word to refer to the relaunch of an existing intellectual property was on Usenet in June 1994. By the time Christopher Nolan rebooted Warner Bros.’ Batman franchise with Batman Begins in 2005, the term was still new enough that writer David S. Goyer was explaining its context to The Los Angeles Times and Nolan was using the term “restart” in interviews with The Guardian.

The continuity between the films and the television show is ambiguous at best. Reportedly, the production team originally planned to have the original cast from the original television show make a cameo appearance at the start of the movie, only to die in the opening mission. Original star Martin Landau complained, “They wanted the entire team to be destroyed, done away with one at a time, and I was against that.”

The finished film would retain a similar opening. An entire IMF team is brutally murdered when an assignment goes wrong. Ethan Hunt (Tom Cruise) initially appears to be the sole survivor of a mission that leaves Jim Phelps (Jon Voight), Sarah Davies (Kristin Scott Thomas), Jack Harmon (Emilio Estevez), and Claire Phelps (Emmanuelle Béart) dead. With the original cast refusing to return for such a brutal cameo, Mission: Impossible relies on the star power of the victims to catch the audience off-guard. 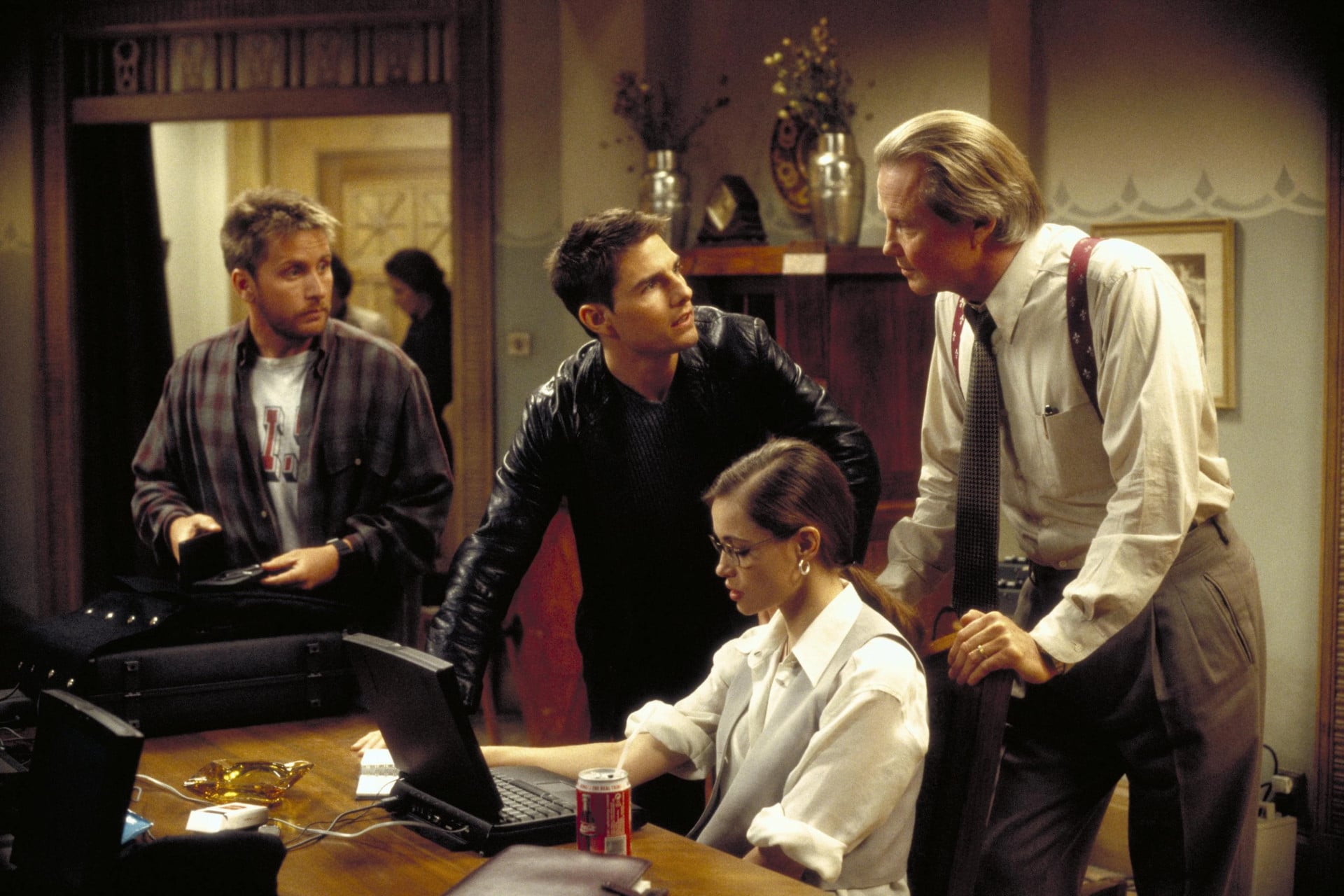 However, despite recognizable faces like Thomas and Estevez, the team at the start of Mission: Impossible is composed almost entirely of new characters. Ethan Hunt, Sarah Davies, Jack Harmon, and Claire Phelps are all new creations without any ties to the pre-existing Mission: Impossible brand. It very much feels like a fresh start and a clean break from what came before, with one notable exception.

The only established character in that initial roster is the team leader Jim Phelps. Phelps was a fixture of the Mission: Impossible universe. Peter Graves had played the character in both the original 1966 series and the 1988 revival. To that point, the character of Jim Phelps had appeared in every season of every Mission: Impossible series with notable exception of the very first. Phelps was a brand ambassador, particularly as played by Graves.

Graves had earned an Emmy nomination and won a Golden Globe for his work on the show. The classic “Your mission, should you choose to accept it…” briefing was directed to Phelps, with the fate of the world entrusted to the character. Graves himself described the character as “the impervious genius.” While Graves never quite accrued the same pop cultural cachet of his co-stars like Martin Landau or Leonard Nimoy, Phelps was an essential part of the Mission: Impossible mythos.

It is never made entirely clear whether the Jim Phelps from De Palma’s Mission: Impossible is meant to be the same Jim Phelps who served as an anchor to the franchise across its prior incarnations. Jon Voight was 12 years younger than Peter Graves, and there was no indication in either of the two prior television shows that Jim Phelps had been married. Nevertheless, the character served as the primary tether between the beloved television series and the blockbuster adaptation. 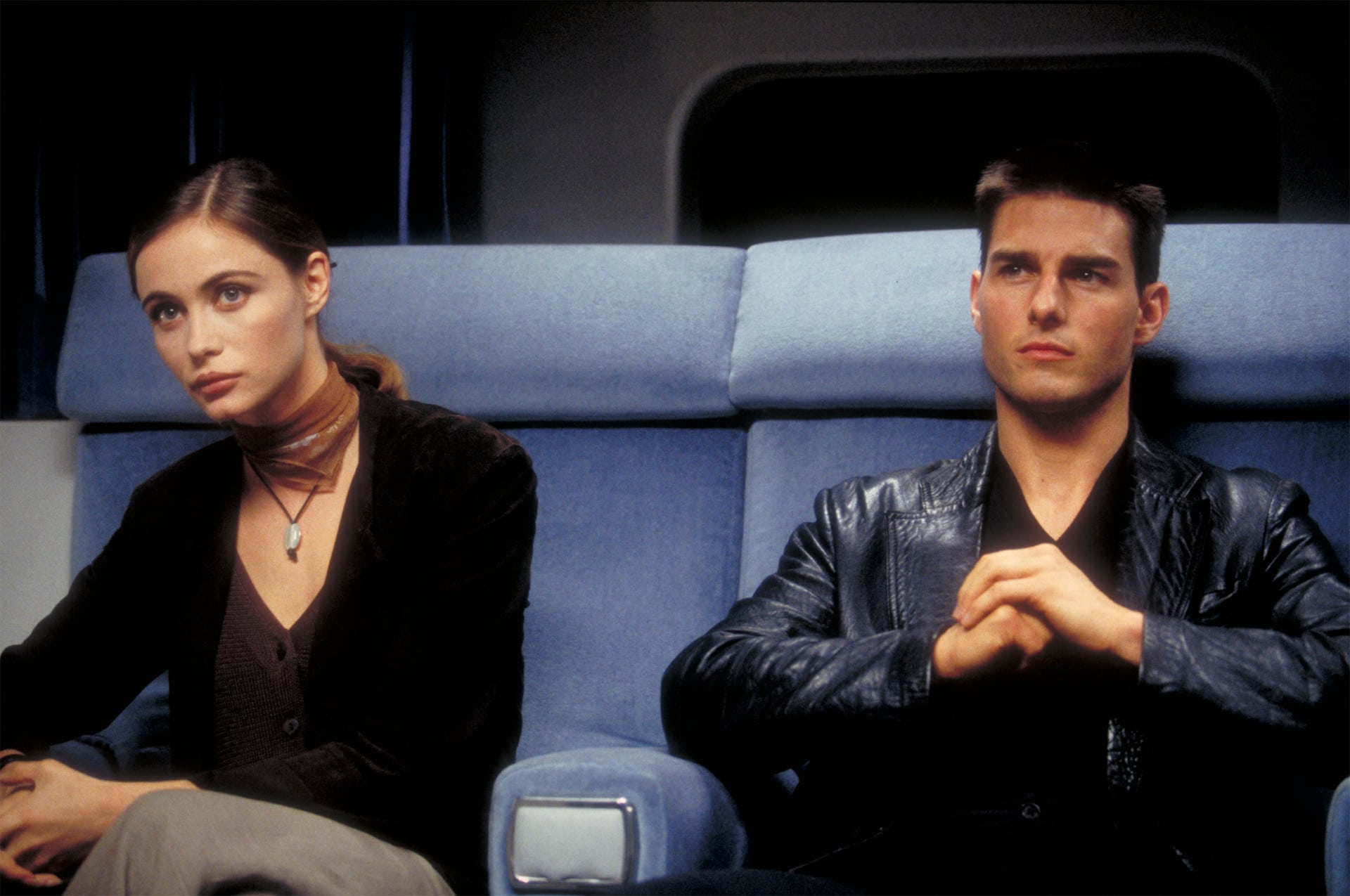 As such, De Palma’s Mission: Impossible approach to Jim Phelps is very interesting. Over the course of the film, Hunt discovers that there were survivors of the opening mission. Hunt meets with Claire at a safe house, and the pair attempt to discover who betrayed the team. Later, Jim Phelps reveals that he also survived the hit. However, this is too good to be true. Hunt discovers that Phelps double-crossed the team in an attempt to steal the CIA non-official cover list to sell it on the black market.

This was a bold choice. It was controversial even in May 1996, with many members of the classic Mission: Impossible cast and crew voicing their outrage over how the character had been treated. Greg Morris, who had played tech expert Barney Collier on the original series, told CNN that he walked out of his screening of the film. When asked to clarify his opinion on the film, Morris stated bluntly, “It’s an abomination.”

Graves confessed, “I was never asked if I wanted to play Phelps in this movie. Jon Voight got the role. But from what I hear he turns out to be the bad guy. …  So, even if they had approached me I very much doubt that I would have wanted to be involved.” He later elaborated, “I certainly objected to Jon Voight playing a character named Phelps who turns out to be the rat and the spy and the killer who destroys his whole team of people — and he himself is killed in that film. I didn’t like that much.”

It seems safe to suggest that no modern franchise reboot would dare approach its material in a similar way today. After all, one need only consider the vocal online responses to portrayals of characters like Luke Skywalker (Mark Hamill) in The Last Jedi and Superman (Henry Cavill) in Man of Steel because they deviated from certain fans’ crystalized ideas of what those characters are or could be. The internet would explode if Mission: Impossible made Jim Phelps a villain today. 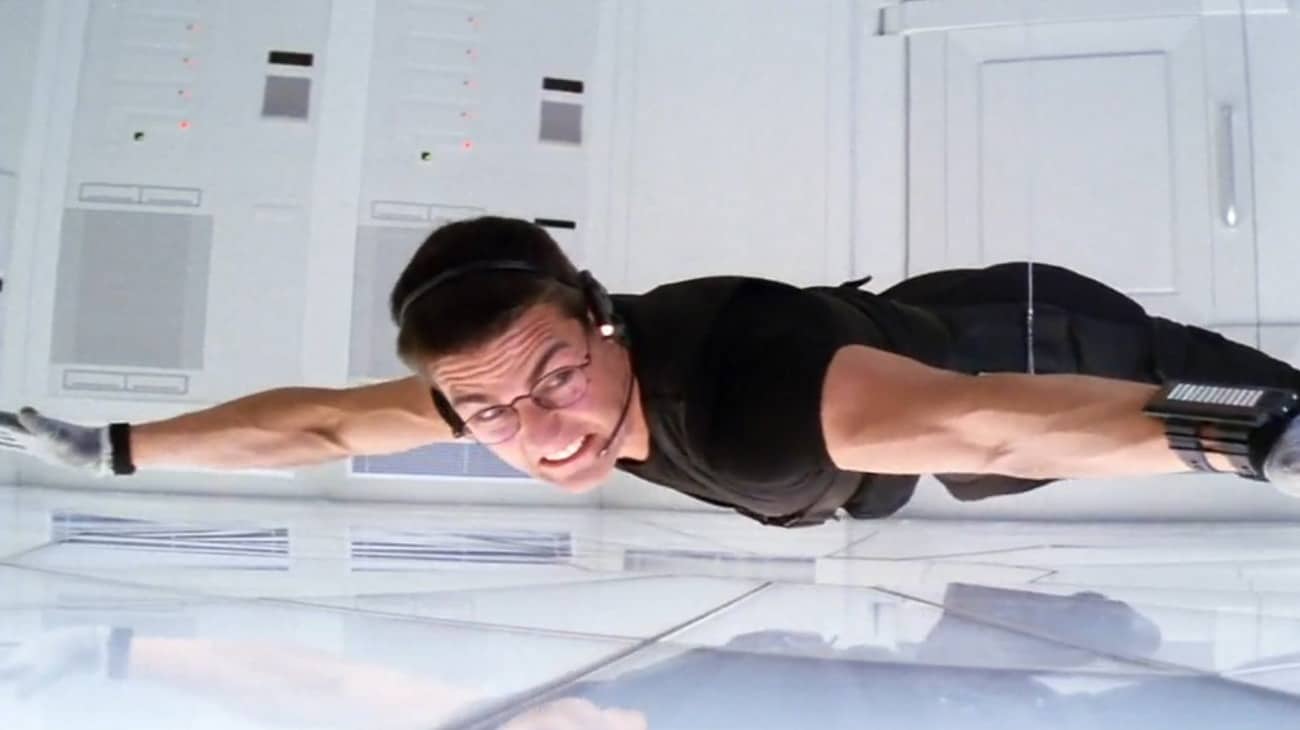 Indeed, there is some backlash present in contemporary discussions of Mission: Impossible, with some fans describing the film as “the most insulting adaptation of (all time).” Mission: Impossible III director J.J. Abrams, arguably one of the guiding lights of this modern wave of nostalgia-driven cinema, suggested that Graves play Phelps in the fourth Mission: Impossible and so retcon the controversial characterization, “I almost feel like you could make him serious again and bring him back.”

Of course, this ignores the fact that Phelps’ betrayal was essential to the narrative and themes of Mission: Impossible. It underscored the film’s dread and anxiety, along with the film’s function as an interrogation of the American military-industrial complex in the wake of the Cold War. The original Mission: Impossible show was a product of an age fascinated and thrilled by espionage and spy craft, colored by the looming threat of the Soviet Union. What happens when that threat is gone?

De Palma’s screen adaptation reworked the paranoia of the original show by turning it inwards, by positioning its spies at what Francis Fukuyama preemptively called “the end of history” without an enemy against which they might define themselves. The uncertainty of Mission: Impossible was the same uncertainty rippling through contemporary media like The X-Files, Enemy of the State, or any Oliver Stone movie of the era – the fear that “we have met the enemy and he is us.”

For that twist to really work and for that theme to really land, the betrayal needs to be profound. It cannot be a new character. It cannot be a character outside the team. When Phelps shows up and points the finger at fussy bureaucrat Eugene Kittridge (Henry Czerny), who is of course returning for the next Mission: Impossible film, it is appealing because it offers relief. If Kittridge is the bad guy, it isn’t one of the team. It isn’t a character with history. It lets the audience off the hook. 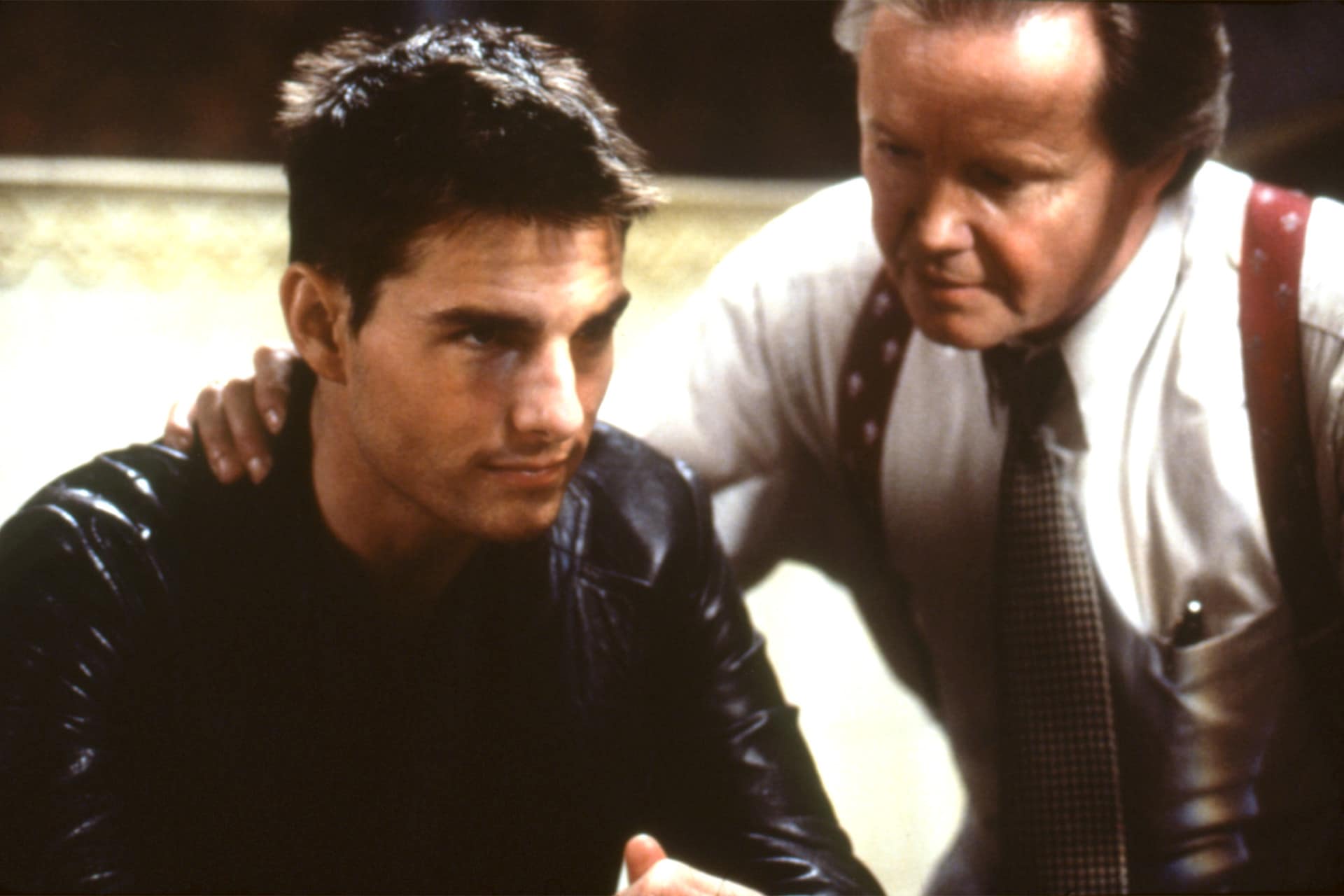 The twist forces the audience to interrogate the nostalgic image of Phelps as a benign patriarchal authority figure. Mission: Impossible is a franchise about disguise and concealment. This is literalized in the series’s use of masks; the face presented is not necessarily reflective of the person beneath. How far does that idea go? Why should the audience trust a face just because it is familiar? It seems unlikely that any covert foreign operative who worked for that long and with that success kept their hands clean. What would Jim Phelps have been party to?

The IMF is not the CIA, but the organizations overlap even within the world of the franchise. Alan Hunley (Alec Baldwin) was director of the CIA before he was secretary of the IMF. During the 1966-1973 run of the show, the CIA would have been orchestrating the controversial Phoenix Program in Vietnam and spying on Richard Nixon’s political opponents at home. When the show was revived in 1988, the CIA was engaged in highly questionable activities in the Middle East and Central America. How would the IMF be so different?

A modern reboot of Mission: Impossible would be too terrified of potential fan backlash to cast the beloved Jim Phelps as a traitor and a villain. It would also be the lesser for that.