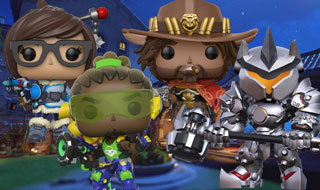 If you’re one of those people that can’t get enough Overwatch collectibles, your wallet may be about to take another hit. Funko has announced that Wave 2 of its Overwatch Pop! figures are coming to stores in April.

The new release will include standard size Pop!s of McCree, Symmetra and Reinhardt, as well as a six-inch tall Reinhardt. Also included in this release is D.Va, who is only 1.75 inches tall, but she fits inside the included six-inch tall MEKA.

There will also be some retailer-exclusive alternate looks available. These are:

There’s no exact date when these will hit stores just yet, but the post on the Funko blog does say they’ll be available in April. Of course, it also mentions moving the payload, and we all know how often that happens.