The hotel is gorgeous. I’m reasonably certain that various journalistic niceties dissuade me from saying which hotel I’m speaking of, but suffice it to say “a pretty nice one.” Everything is made of wood, granite and gold; all of it polished into an endless series of reflective surfaces like the “lounge” setup in an upscale furniture store.
I don’t belong here.

I’m supposed to be here. I was invited, specifically to attend a “press event” for Zombieland. But that doesn’t mean I belong here. I doubt I could afford a room here, and what with my travel ensemble of jeans and jean-jacket over a Super Mario Bros. t-shirt, it’s safe to say that everyone from the VIPs to the wait-staff has outdressed me. This is a place that sees a steady stream of titanium cell phones and Amex Black Cards; I’m pocketing a digital audio-recorder and the remains of a commuter rail ticket.

I just caught myself reading those paragraphs back to myself in the voice of Johnny Depp as Hunter S. Thompson. That’s sad.

This will be what they call in the business a “roundtable,” during which I and the other movie journalist types will all gather and takes turns trading Q’s&A’s with Woody Harrelson and Jesse Eisenberg, the stars of the film. I’m just this side of nervous – I’m slightly new to doing this in a professional capacity, and unless I’m missing larger chunks of my memory than usual this will be the first time I’ve met anybody legitimately famous in a context where they’re semi-obligated to acknowledge my presence.

There’s a certain added surreality to the fact that one of the celebrities in question will be Woody Harrelson, since I’m here in Boston – within walking-distance of the bar that inspired Cheers, the TV sitcom on which he first became a star (everything in Boston is within walking distance, try driving here and you’ll understand.) Alright, perhaps that’s more “coincidental” than “surreal,” but mainly it helps me add something to my mental “do’s and don’ts” list: Bob, don’t go asking a Cheers question, since he’s probably heard a million of them today.

The whole thing is going down in what I call the “spooky” part of the hotel – i.e. the part where the architecture doesn’t allow for any outside-looking windows, so if the artificial lights went out you might as well be miles below the Earth’s surface. Did The Shining make this stuff creepy, or was it already creepy and The Shining just acknowledged that fact?

Spookiness immediately dissipates as I spy catering trays. I make a big Obvious Noob of myself being genuinely surprised at the presence of food. Carnival food, mostly, a reference to a big plot point in the movie involving an amusement park. Corn dogs and cotton candy accounted for, plus a certain infamous brand-name pastry that plays a significant role in one character’s persona. Cute.

By now, I hope, you’ve had a chance to enjoy my actual review of the film, which should be running today. Suffice it to say, if either of the actors ask us if we liked the film, I’ll be able to answer honestly and quite positively. It’s a terrific little piece of work.

Eventually, we get to go in and meet The Stars. Immediately, I realize now why it’s initially so strange to see movie people in real life: You keep expecting background music, or edits. Subsequently, I realize that Woody Harrelson does, in fact, seem to be as cool as you’d imagine him to be.

The questions start up so fast I barely have time to arm my recorder. It’s clear that Eisenberg and Harrelson have been doing a lot of these; they have a snappy back-and-forth rapport similar to what their characters share in the film, complete with deadpan humorous responses to questions they’ve probably answered dozens of times already; i.e., someone asks right off the bat if Eisenberg finds any significance in having appeared in two films in a row with the word “Land” in the title. (Zombieland and Adventureland.) 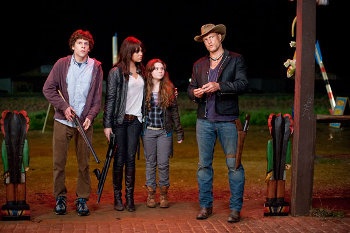 “Do they like movies like this?” That’s a good one, I wish I’d thought of that one. Eisenberg says he doesn’t like “genre films” or “film in color” (heh!) but that he likes this one and it’s shown him why “these are the movies people go to see.”

Someone asks about improv, which makes sense given the tone of the movie. Woody replies that the script was great (despite reservations over starring in something called “Zombieland”) but offers up examples of some of the film’s funniest lines which he says Eisenberg improvised on-set, which is surprising at least to me – it’s such a tightly-constructed film.

The improv question leads to mutual outpourings of praise for 12 year-old Abigail Breslin, the second of the film’s two female leads. Without a hint of irony or false-sincerity, Harrelson opines that he’s “hoping maybe in fifteen, twenty years to have the chops she has at twelve.” He’s right – Breslin (who people know best as Olive from Little Miss Sunshine) is Zombieland’s secret weapon – the canary in the coal mine whose reactions tell the audience when “funny-scary” has tipped over into “scary-scary.”

A question about on-set camaraderie gets Eisenberg talking about how the film was shot on digital as opposed to film, something I wouldn’t have been able to tell you looking at it – it’s a gorgeous, slick-looking film that betrays none of its apparently mid-range budget.

“I get terrified by scary movies,” says Woody when one of us asks their thoughts on the undead/zombie phenomenon. He liked Shaun of the Dead, but while he can appreciate 28 Days Later or I Am Legend he “has a hard time falling asleep.” Both of them are amused by the spontaneous appearance of fans in zombie getup at various events – a “zombie crawl” is, in fact, scheduled to meet them at a local screening later that very night.

My turn, now. Yikes. Think of something, Bob! I stall, trying to recall some “this guy did his research” factoid about the movie. “This was originally going to be a TV show, right?” I finally ask. That’s true – the filmmakers originally set the project up as a series for television. Woody gives a matter-of-fact confirmation, before Eisenberg cuts in: “They were going to shoot the exterior of a bar here in Boston, then we’d shoot the rest in LA.”

The questions quickly turned to “The Cameo,” which we’d been asked beforehand to not ask specifically about because they’re trying to keep it a secret. Seriously, if there’s a reason to see Zombieland on opening night, it’s so you won’t be pre-spoiled on what’s easily one of the best surprise-cameos in recent memory. I won’t repeat who it is, but in terms of the roundtable someone does bring up the now well-reported rumor that at one point the cameo was supposed to have been the (now) late Patrick Swayze. No confirmation on that from either party, though Harrelson mentions some others who were considered for the bit including Sly Stallone, Joe Pesci and Jean-Claude Van Damme.

At this point, the handlers are giving everyone the wrap-up signal, and things descend into more jokes and callbacks to earlier bits. Soon enough, it’s over. We file out, the stars remain – presumably to wait for another round of critics with another round of questions. Back outside, I still find myself ill at ease with the shiny, well-kept hotel and its important-looking, business-suited guests. Part of me wonders if that common sense of separation from the humanity around you is part of what makes these zombie-apocalypse movies so resonant to people today.

Another part of me begins making plans to slap that last part silly for not thinking of that earlier, since it would’ve made a decent question for the interview.