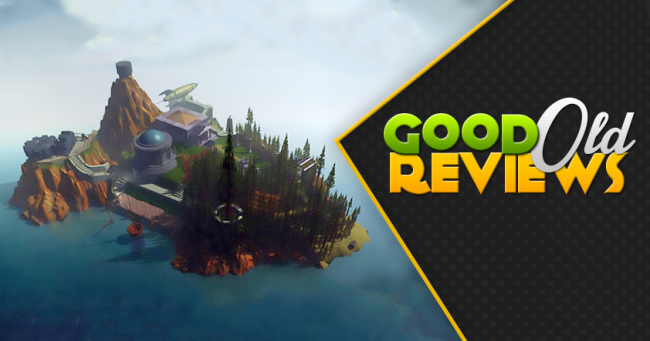 So let’s get any pretense of this being a traditional product review out of the way: Myst: Masterpiece Edition, a copy of which GOG.com has generously provided for the purpose of this review, is a bit shit. It has not aged well. A physical copy would at least look nice on your shelf, but a digital download? No. A download you intend to play for entertainment in the year 2015? Christ, no. There’s a core element of Myst that was, and still is, brilliant, but it plays like a PowerPoint presentation running on your gran’s spyware-infested Dell. Bugger authenticity. You should play the 3D remake (also on GOG.com), it’s a lot better.

So as an actual product, Myst (I’ll be dropping the Masterpiece Edition monicker from here on out as there’s very little difference between the two versions) doesn’t hold up, but as an artifact – a kind of gaming transitional fossil, it’s fascinating. There are some who would argue that the game actually has little in the way of a lasting legacy. Myst was a commercial juggernaut: The best-selling PC game of its era until The Sims galvanized the creepy serial stalker/murderer market, yet the surge of “graphic adventure” games many thought its success would inspire never happened, and the series itself has lain dormant since 2005. There’s been a handful of Myst-likes in recent years – Ether One, The Room series on iOS and The Talos Principle are the most obvious examples, but for a game that sold six million copies, Myst has very few direct imitators.

But nuts to those people. In terms of actual influence, Myst is huge. You can see elements of its design in Resident Evil, System Shock 2, Tomb Raider, Dear Esther (plus every other walk-em-up you’d care to name) and Dragon Quest VII. No seriously, Dragon Quest VII was directly inspired by Myst. There’s a direct line of influence from early text adventure stuff like Zork, to Sierra and Lucas Art’s adventure games, to Myst, to pretty much every puzzler of the late 90’s and early 2000’s. Its influence is even more pronounced now that slower-paced, horror-adventures are finally coming back to the fore. Amnesia was obviously chugging that Myst juice. SOMA too.

So what was it about Myst that drove audiences nuts (in both senses of the word) back in 1993? Well like many games that see success outside of the traditional gamer market – what I suppose we now call the “casual” market – Myst takes a well established idea and strips it down to its simplest, most accessible form. It’s an adventure game, technically, but one lacking in what were considered the mainstay features of the genre. There’s no inventory, no real item puzzles and your interaction with objects is limited to either clicking on them to turn them on or clicking on them to turn them off. You click on a path to go forward, or on the sides of the screen to turn – a simplified version of the, “go north, go east, eat tree,” navigation system of old-school text adventures. There’s no monsters, no enemies in the traditional sense, no time limit and there’s no fail state. “Accessible” is kind of a dirty word these days – one we tend to confuse with “shallow” – but Myst is meant to be a game without distractions. Its simplicity isn’t a base appeal to a larger audience. No, the straight-forward mechanics are part of an effective focus on minimalism that deliberately downplays the importance of the player in order to let the environment take center stage. Art, yo.

You’re so unimportant that you don’t even get a name in Myst. There’s no quest or character motivation driving your exploration. You’re unceremoniously dumped onto the titular island and your only real function is to explore and maybe solve some puzzles. Like with many of the “walking simulators” it inspired, Myst is more about piecing together other peoples’ stories than it is taking part in one. Eventually, once you’ve figured out most of the island’s mysteries, you get a chance to get involved in the story yourself, and it’s a satisfying moment, but there’s a reason the game is called Myst and not Joe Douchebag: Lever Master. It’s not about you. It’s about a place. 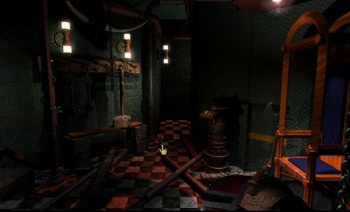 Even the puzzles are designed to reinforce the notion of the environment as a character. There’s only a handful of self-contained puzzles, the rest will have you traveling all over the island figuring out how the various devices scattered around it work together. You’re expected to recognize reoccurring art motifs, or subtle clues that indicate one random Jules Verne bullshit machine is directly connected to a similar Jules Verne bullshit machine on the other side of the island. It’s not quite trial and error, but I can see how frustrated players might see it that way. Instead the game encourages a kind of holistic approach (warning: we have reached peak wankery) to puzzle solving. You need to experiment. You press a few buttons and see how the island reacts. You press a few more and watch carefully. Eventually a convoluted system begins to emerge. Even with the dimension hopping that starts to come into play in the middle of the game, Myst feels less like a series of puzzles and more like one large puzzle made up of dozens of smaller ones. It’s really quite addictive once you’ve made a little bit of progress.

The vast majority of Myst’s puzzles are fanciful, but grounded in a Verne-esque, steampunky, mechanical realism. They’re machines that seem like they could actually exist, which makes figuring out what they actually do a lot easier. That being said, they’re still very much old-school “puzzles” in that they serve no real in-universe purpose beyond being arbitrary roadblocks. If you’re the kind of person who feels the need to ask why someone might hide a touch sensitive LCD screen inside their fireplace, then Myst might be a bit deliberately obtuse for you.

While they don’t make a great deal of sense in terms of realistic environmental design, the puzzles fit perfectly with the game’s surprisingly focused aesthetic approach. While the game’s art direction is arguably far weaker than that of its sequel, Riven, there’s a scholarly theme that runs throughout, from the Classical architecture of the central buildings, to the brass and leather of the hidden libraries, to the obvious colonial visual themes of the hidden ages. It’s a good use of visual theming that almost makes up for how ugly the actual 3D work is. 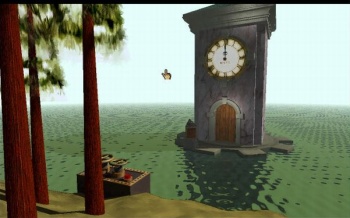 And that brings us on to what was the game’s greatest strength, and is now its greatest failing: Its visuals and the sacrifices it makes to deliver them. Myst was a graphical marvel back in its day. Many a mind was blown by its tubular, X-treme, 1993 CD-ROM grafix. By which I mean the game was essentially a series of pixelated screenshots of a pre-rendered environment made with primitive 3D modeling tools. That crack I made at the beginning about Myst playing like a PowerPoint presentation? That wasn’t a joke. The game is literally a series of slides. There’s the odd bit of animation, but the first thing you’re likely to notice when you boot up the game is that the ocean surrounding the island is completely static. Most of it is static.

There’s nothing inherently wrong with the system, but Myst obviously suffers from being the first of its kind and it seems like the devs were struggling to tell the difference between features and limitations. The game loves to change your orientation without telling you, and with no indication of which direction you’re facing, it’s very difficult to keep your bearings. Worse, some of the routes through the island are only noticeable when you’re facing a specific way on a specific tile. For the most part, Myst is hard but fair (except the bloody piano puzzle), but it dips into bullshit territory when it starts using the crappy navigation system against you.

And it’s not like Myst’s pre-rendered backgrounds are particularly impressive. The 3D modeling tools used to create the island were obviously still in their infancy (Myst predates Toy Story by about two years and ReBoot by one). The world design is interesting and thematically appropriate, but we’re looking at it through an awful early 90’s jank filter. Look at those trees, man. Those trees are terrifying.

Ultimately, Myst is a great study in simple, efficient design, and I wish more modern devs would jettison bloat as ruthlessly as Cyan did in 1993. But, as I said in my opening paragraph, you should play a version of Myst, just not this version. Nearly every problem I have with the game is technical, and so many of those problems are solved in RealMyst: Masterpiece Edition. There’s something to be said for authenticity and playing a game “the way it was meant to be played,” but there’s nothing in Myst that isn’t done better in its own remake.

And seriously. Fuck that piano puzzle.