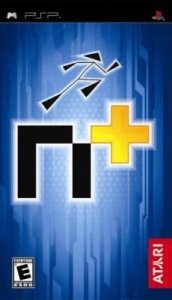 Atari will release N+, the Xbox Live Arcade platformer, for the PSP and DS this July.

The sequel to the award-winning independent game N, N+ lets players control a nimble stick-figure ninja as he attempts to navigate a gauntlet of lasers, landmines, and electrified traps. The downloadable title has earned praise from gamers and reviewers alike for its robust physics engine and steep difficulty curve.

In addition to hundreds of unique singleplayer levels, the game will also include both competitive and cooperative multiplayer modes, as well as a level editor. Both the DS and PSP versions of the game will allow players to sample and download player-created levels through the systems’ wireless capabilities.

The game is currently slated for release in July.