The problem with being Pixar, in a nutshell, is that people will always expect you to be Pixar – meaning, that you are expected to hit every movie project out of the park every time. With the exception of the Cars movies, which everyone seems to have decided (despite protestations of the filmmakers to the contrary) are more of a merchandising focused fundraising thing. Pixar isn’t simply expected to always make good movies, they’re expected to make great ones, movies that loom large over and even define their very genres. So, when they make one that’s merely pretty good, one that would be higher-end fare from anyone else, it becomes a big deal.

That’s the first thing that makes Brave a little bit difficult to talk about. It’s not a bad movie, or even a disappointment by any reasonable standard, but it feels like it ought to be given its pedigree.

The second thing that makes Brave difficult to approach is that, for reasons I have a bit of trouble understanding, a plot development that feels like it makes up about half of its narrative has been left out of all promotion for the film. Supposedly Disney has intimated that it should be treated as a significant spoiler. I’m not sure why, since it seems less like a surprise than the point of the movie but if people don’t want to be spoiled I’m willing to play ball with that.

Set in a fictionalized version of medieval Scotland, Brave is Pixar’s first film centered on a female protagonist and, ostensibly, the studio’s first contribution to the “Princess Canon” of the broader Disney Empire. The princess in question is Merida, daughter of a boisterous king and a power-behind-the-throne saint of a Queen. Merida seemingly takes more after her father, more interested in adventure seeking and honing her considerable archery skills than learning the courtly manners and ladylike pursuits her mother insists upon. When she learns that the time has come for her to be married to one of the three sons of the land’s three other kings, things get out of hand.

In short order, Merida sabotages the competition between the three boys then gets into a shouting match with her mother that leaves both women emotionally wounded and Merida fleeing for the forest. There, she encounters a comic relief Witch who offers to grant her a wish. Merida’s wish is to change her fate (re: arranged marriage) but rather than simply say that she obliquely frames the situation as “change my mother.” Since she hasn’t seen literally every princess movie ever made, she’s shocked to discover that the “change” in question has an extremely negative (and ironic!) component, the specifics of which constitute the twist I’m not supposed to spoil. Suffice it to say, this turns the film into what at first seems like it was supposed to be the main subject: A mother/daughter buddy movie where the two women work out their differences as they quest to repair the damages inflicted by the Witch’s curse. 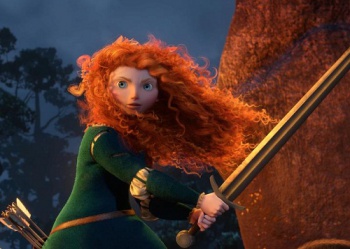 Okay. Good idea. Most rebellious tomboy movies are about overbearing dads, so it’s a nice switch to make it strictly about the two women while the men (all of them, really) are well-meaning buffoons. The quest itself, what we see of it, is visually interesting and filled with a lot of great character moments …

… but by the time it gets there, the film feels like it’s more than half over. Strangely, considering that Pixar is revered above all else for its commitment to good storytelling, the film’s structure is wobbly and awkward. The first act is much too long, spending a lot of time introducing the various clans and supporting characters, relishing attention on an overstuffed cast of one note comic-relief personas (the three kings, their respective sons and Merida’s three little brothers are effectively “The Nine Stooges” and not much else) and montages establishing Merida’s physical prowess. By the time we get to the curse and the quest to be rid of it, it feels like an entire movie has passed and the fact that the solution to the problem is maddeningly easy to suss out. I imagine even the youngest audiences will be wondering what’s taking them so long to figure it out.

It feels very much like some heavy story revision has taken place. The film’s production has been famously rocky as Pixar stuff goes, with the original director/conceiver departing and a new team taking over. There are loose bits of thread lying all about: The closest thing to a villain is a monster-sized bear that stalks the kingdom’s wilderness, and he’s ultimately given a backstory that seems like it ought to mean a lot more plotwise and thematically than it actually does. There’s also a “legend within the legend” that serves little point other than to underline the film’s fairly obvious moral (individual independence and family/community-stability are equally important) and The Witch, who is tied in to both of them but otherwise exists as a plot device and an expository device.

The result is a movie that takes much, much too long to get where it’s going and more problematically skewers its own attempt at a message; Merida’s rebellion gets so much airtime it begins to feel like the only reasonable viewpoint in the film, so when the “but wait” comes in later it almost feels like a tacked-on caveat. The whole enterprise feels less like the sprawling Disney fairytale it aims to be and more like a stretched out episode of some medieval-set animated sitcom (“This week on Brave, Merida and The Queen get into a tough spot and both learn a valuable lesson. Meanwhile, The King and his buddies get into a waaaacky brawl!”)

Still, Brave isn’t bad, just not as good as one might expect it to be. Call it the peril of high expectations.