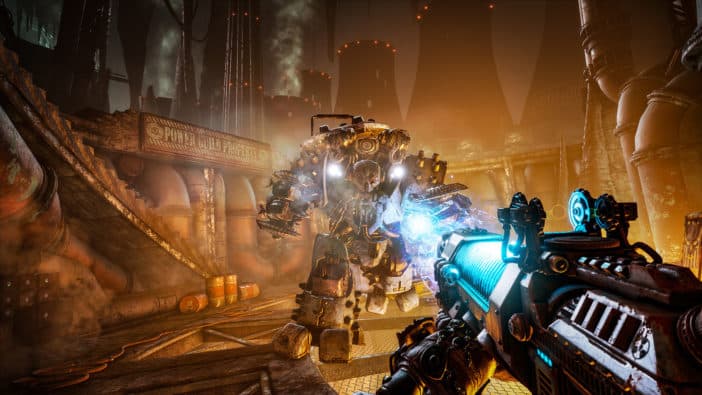 Necromunda: Hired Gun is a single-player first-person shooter set in the Warhammer 40,000 universe, and it’s coming to consoles and PC in a few months. The game comes from publisher Focus Home Interactive and developer Streum On Studio and looks like a gritty, edgy take on some of the darkest parts of the Warhammer universe. It’s set to arrive on PC, PlayStation 4, PlayStation 5, Xbox One, and Xbox Series X | S on June 1, but you can see how Necromunda: Hired Gun is shaping up in the reveal trailer below.

Focus Home and Streum On explain that you’ll use different gameplay mechanics to gain the brutal upper hand on gangs found throughout an underhive city. As the reveal trailer indicates, Necromunda: Hired Gun will see you jumping and running on walls and using a wrist-mounted grappling hook to get up close and personal with your enemies.

You’re a mercenary accompanied by a “cyber-mastiff,” a half-robot dog companion that can warn you of incoming enemies and instantly dispatch them with a quick bite to the neck. Augments and upgrades can be utilized for both you and the cyber-mastiff too, so expect the gameplay to get meatier as you progress.

You can preorder Necromunda: Hired Gun now to gain access to a discount on the game and a Hunter Bounty cosmetics pack.