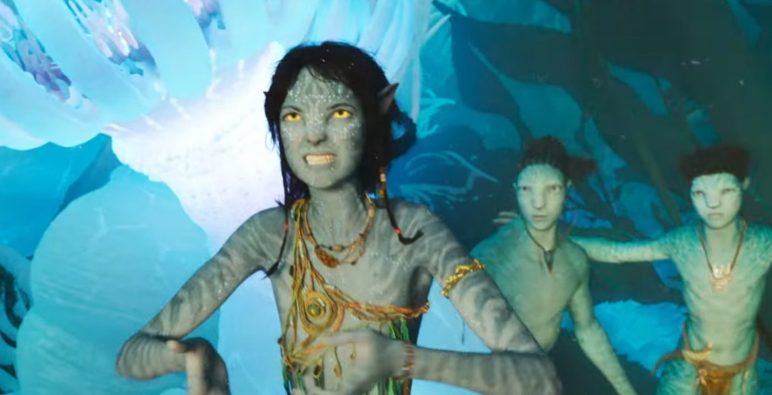 Avatar was definitely a visually stunning movie despite its myriad of other significant flaws, and it appears that its sequel, Avatar: The Way of Water, will be much the same. The full, official Avatar: The Way of Water trailer for the film landed today and shows off basically nothing but the movie’s stunning, water-filled visuals. So much so that one becomes worried that this will once again be a pretty hollow tale with a shiny cover.

Avatar‘s lack of cultural impact has been discussed and written about across the internet, but it still stands true. Disney has dumped a lot of money in the belief that this is a winning franchise that people will flood to theaters to see, and it’s a bad idea to bet against James Cameron. But this trailer only highlights the sequel’s struggles. Is anyone emotionally invested in the characters here like the Avatar: The Way of Water trailer seems to think we are? Do you care about Jake Sully (Sam Worthington) and Neytiri’s (Zoe Saldana) romance or expanding family? Who out there was clamoring to see the oceans of this planet or even have the world expanded on much more than the cliche that was the first film? Basically, the only thing to get excited about here are the visuals.

The plot of The Way of Water, which clocks in at a whopping three hours and 10 minutes, has Sully and Neytiri exploring the world with their family. However, a new threat arises and a battle with the nasty humans is still ongoing. Clearly, Cameron’s love of the oceans will play a key role in this movie, and we can expect some exceptionally heavy-handed environmental messaging just like with the first movie. While that message might be good, there’s just going to have to be more to this one to get people bought back in. Or maybe there doesn’t. There wasn’t anything to the first film other than spectacle, and it’s still one of the highest-grossing movies ever.

Avatar: The Way of Water will release in theaters on December 16 in theaters.