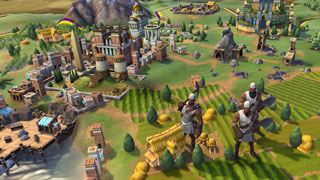 Civilization VI will replace Workers with Builders, and this video gives you a first look at how they work.

If you’ve played any of the previous Civilization games, you’re familiar with how improvements were made to your cities. You set them up, and workers built them over a number of turns. That’s going to change in Civilization VI. In place of the workers will be a new unit called Builders.

Builders are built in the city, and they will have a limited number of charges. Most will have three charges, meaning they can be used three times to build an improvement before they disband.

While the charge system will require players to think strategically about where to use their Builders, there is an upside. Instead of waiting multiple turns for an improvement to complete, Builders will now complete them instantly. You can get a first look at builders in the video below.

You can read more about the Builders, and the ideas behind automation, in this post on the game’s official site.

The addition of Builders, combined with the changes coming to cities, means that Civ VI will have some new elements that everyone will need to master when it launches worldwide on October 21.