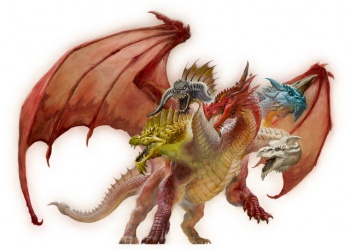 In a panel presentation by Wizards of the Coast R&D member Chris Perkins at PAX East, new details have emerged surrounding both the upcoming Dungeons & Dragons edition and the Tyranny of Dragons multimedia event that will begin this summer and run through the new edition’s launch later this year. At its PAX East 2014 panel, Wizards of the Coast had R&D member Chris Perkins present new information and art for the upcoming fifth edition of Dungeons & Dragons as well as answer audience questions about the Tyranny event and Wizards’ plans for the new edition. Among the revealed information was a variety of art from “the new books”, including the gallery of new art here, provided to The Escapist by Wizards of the Coast. Various other pieces of revealed art made it out of the panel, including this one I snapped of The Tarrasque, which looks more like a Kaiju than ever. Over the course of April 11, Wizards of the Coast also tweeted out a variety of pictures of Tyranny of Dragons concept art.

The Tyranny of Dragons storyline takes place in the Forgotten Realms, which Perkins described as the definite flagship setting for the new Dungeons & Dragons, meaning a decided shift away from the default “generic” settings that the game used in the previous edition. That’s an obvious move for Wizards of the Coast, who will want their most popular setting at the forefront of the newest edition. The choice of dragons as the iconic enemy for the first story arc, said Perkins, was because they are the most iconic monsters that this game has. Some elements of the old settings definitely stuck around, though, with Perkins using D&D 4 terms like “Shadowfell” and “Feywild” to describe the planes of existence in the game. Tyranny of Dragons will apparently be a multimedia event, taking place both in the real life D&D Encounters organized play program and in the Neverwinter MMO, as well as in other, unspecified media properties to be revealed “soon.” Tyranny of Dragons will be a standalone product, entirely separate from the new D&D books. It also aligns with the way Perkins was talking about D&D – as a multiplatform entertainment experience tied to a central theme, not something that necessarily only exists as a tabletop game.

As previously revealed, Tyranny of Dragons will revolve around the efforts of the Cult of the Dragon to free Tiamat, the Queen of Evil Dragonkind, from the Nine Hells and resurrect a thousands-of-years-old draconic empire. As part of that quest, the cultists will seek out five ancient dragon masks and attempt to earn the support of the various, disparate factions of evil dragons. Cities mentioned as being key in their plot include Neverwinter, Waterdeep, and Baldur’s Gate – as well as the whole Sword Coast of Faerun. The Red Wizards of Thay will be making an appearance, providing armies of undead and magical support to the Cult of the Dragon, all while seeking to further their own goals.

The new season of Encounters themed along with Tyranny of Dragons will be what was called a “superadventure” and was implied to be a nonlinear experience similar to recently released modules Murder in Baldur’s Gate and Legacy of the Crystal Shard. Chris Perkins emphasized, when answering a question about the new Encounters series, that the game would be much more open to Dungeon Master interpretation, improvisation, and innovation than previous Encounters programs – indeed, he said that it would be “encouraged” by the structure of the adventures. Perkins also hinted at beneficial changes to the structure of encounters to incentivize participation, but did not specify details.

Arrayed against the Cult and the Wizards will be a variety of Faerun’s good and not-so-good factions, including the Harpers, the Company of the Gauntlet, the Emerald Enclave, the Lords’ Alliance, and The Zhentarim. When asked how he expected the Zhentarim to work with the other, more traditionally good factions, Chris Perkins explained that the Zentarim are interested in money and glory, neither of which they can have if an army of evil dragons overruns the world. Aligning with these factions will be a major element of the new Encounters program, with players gaining special rules, ranks, rewards, and mechanics depending on who they throw in with. The Zentarim, Perkins said, were included specifically to appeal to those characters with a checkered past. 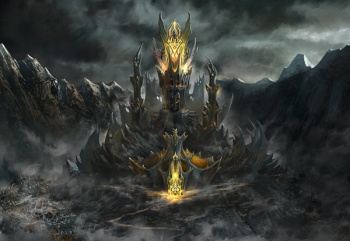 Further details were revealed about the general shape of Dungeons & Dragons to come emerged during the panel’s Q & A section, and the most interesting information asked of Perkins was about settings other than the Forgotten Realms. When asked about the other settings that D&D has had in the past, Perkins said that all “key” settings would be supported “in some way.” In regards to the Eberron setting in particular, Perkins was cagey with details but said that Eberron fans will “love” what is being done for the setting, further implying that Eberron creator Keith Baker would be somehow involved. It’s hard to say what else can be considered a “key” setting, but if Wizards’ past choices can be counted on, then Dark Sun will likely be included in that list. Perkins also provided more details about Ravenloft saying that players would see more Ravenloft content “very soon.”

“Dragonlance is not dead,” said Perkins when asked about the classic setting. However, when asked about it after the panel, Perkins said that the R&D team as it is now would require a “specialist” to do work on Dragonlance. Which when I released it into the wild via Twitter prompted this rather hilarious twitter exchange between one of Dragonlance’s authors, Margaret Weis, and Cam Banks, who did work for Dragonlance during the Dungeons and Dragons Third Edition era. Beyond that Dragonlance nugget, the only further detail revealed was that Wizards of the Coast wanted to “Do right by their settings.”

Further details include that Dungeons & Dragons‘ Fifth Edition is about 97.9% complete. In regards to class design, and specifically addressing complaints that in the Fourth Edition of the game every character felt the same, Perkins said that there was no symmetrical design between classes, and that the game was designed so that at each level of play no character felt “like crap.” However, he said, “classes gain features asymmetrically, and every class has its thing … and feels very different from others.”

Perkins ended the session by saying that there would be a new line of tie-in fiction featuring iconic characters to fit alongside both the Tyranny of Dragons event and the launch of Fifth Edition D&D.

Above all of these things, though, is the confirmation that Modrons are back in the game – Wizards of the Coast showed concept art and everything. No take-backsies on this one or we riot.

Wondering what else was going on at PAX East in Tabletop games? Check out everything there is to know about the convention’s tabletop game news right here.