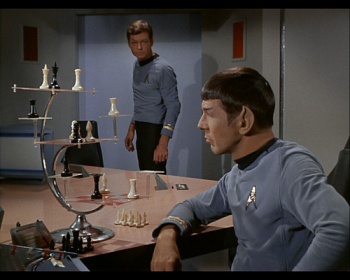 But the latest tabletop Trek iteration might be the best of the lot. The space-faring franchise is getting its own take on Vlaada Chvátil’s Mage Knight, an epic fantasy game that combines exploration, deck-building, RPG-style character progression and WizKids’ HeroClix-style miniatures.

What does this mean for Star Trek? It means we finally get a game of exploring strange new worlds, seeking out new life and new civilizations, and boldly going where no one has gone before!

I feel like I must have entered the Holodeck without realizing it.

Details are few on the ground right now, but designer Andrew Parks had this to say: “Like the Mage Knight board game, Star Trek: Frontiers allows players to explore areas that are new and different each time they play. I can’t wait for Star Trek fans to start commanding their Federation and Klingon ships as they encounter Romulan Warbirds, send carefully chosen away teams down to unknown planets, and challenge the might of the Borg.” Mention of Romulans, an alliance with Klingons, and the Borg suggest this takes place during The Next Generation era, most likely.

It is unknown at press time if monkey borg will feature in some form.

Similar to Mage Knight, Frontiers sees players taking on a variety of scenarios that bring them into uncharted regions of space. They will earn experience points, upgrade their ship and hire crew, and their captain will earn a reputation – for better or worse.

Mage Knight itself has some history – in its earliest iteration, it was a collectible miniatures war game, the first to feature the combat dials now present in most WizKids products.

We’re not sure if the game will be out this year. Speaking personally, I am excited. I hear that Patrick Stewart has been looking for a new hobby – maybe I can convince him to take on the campaign.