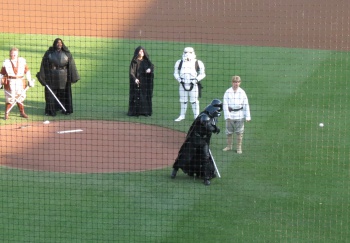 A trademark ruling has granted the Yankees official rights to the “Evil Empire” moniker.

For some unfathomable reason, I’ve discovered that New York Yankees fans like myself aren’t well-liked in other parts of the country. Fans of other teams often assuage their sadness by insisting that the New York Yankees constitute the “Evil Empire” of baseball, something like a convocation of Sith Lords who fight with bats instead of lightsabers. Well, according to the New York Yankees, those fans are right. Due to a trademark dispute that ruled in the Yankees’ favor, they’re now legally in the right to call themselves Baseball’s Evil Empire. This would be the appropriate time to photoshop George Steinbrenner’s face onto Emperor Palpatine, if you haven’t already.

The dispute arose in 2008 when Evil Enterprises, a sports memorabilia company, tried to trademark “Baseball’s Evil Empire” as way to sell t-shirts, jackets, hats, and other clothing to baseball aficionados. Since U.S. law prohibits seeking a trademark with the sole purpose of disparagement, this may have seemed like an open-and-shut case. However, Thomas Shaw, an administrative trademark judge who oversaw the case, did not think the issue was so clear. “The offensiveness of ‘evil’ isn’t as obvious as a dictionary definition would suggest, especially in matters of popular culture,” he wrote in the case’s decision. Shaw calls the moniker a “badge of honor” among Yankees fans, and points out that the Yankees themselves apparently liked the name enough to play Star Wars music while announcing the starting lineups for each team. “Having succumbed to the lure of the dark side, [the Yankees] will not now be heard to complain about the judgment of those who prefer the comfort of the light.”

While the judges did not ultimately support the Yankees’ claim of “Evil Empire” as disparagement, they did rule that Evil Enterprises cannot trademark a name that the Yankees so clearly associate with themselves. So there you have it, fans of the Red Sox, Orioles, and that other New York baseball team: we’re officially the Evil Empire you’ve always made us out to be. And we find your lack of faith disturbing.