As ridiculous as such labels are, I tend to consider myself a hardcore gamer. I’ve been playing since I was maybe six or seven years old, owned 38 different consoles and about 1000 games before I moved to North Carolina (stupid space restrictions!), and, most importantly, consider videogames to be an important part of my life. I recently discovered, however, that I am not hardcore enough for Harvest Moon.

I have a strange relationship with the Harvest Moon series. Despite the fact that the games don’t actually change all that much from installment to installment, I have nearly a dozen of them for the PlayStation, N64, GameBoy Advance, GameCube, and the DS. I’ve played them all, but never actually gotten very far in any of them. Oh, I get a cute little farm, expand my house a bit, and raise some very happy chickens, cows, and sheep, but before long my attention wanders and I’m back to shooting things in the head. I never feel like I’ve done right by Harvest Moon, so I brought the latest installment, Sunshine Islands with me on a recent vacation, determined to spend my week away from civilization devoted to my tiny virtual farm.

In case you’re not familiar with Natsume’s long-running franchise, the object of each installment is pretty much the same: revitalize your farm or ranch while making friends in the community and eventually settling down and raising a family. Time passes at a steady clip, so you have to balance work life – tending crops, raising livestock, and whatnot – with social life, making sure to have enough time leftover to sleep and eat. It sounds tedious, but it’s remarkably addictive, and the animals are almost painfully adorable. It also has surprising depth. Among other things, you can train your animals for competitions, collect recipes, craft jewelry, dig in the mine, attend festivals, and persuade Harvest Sprites to help you in your labors. There’s a lot more going on than just watering strawberries, is what I’m saying.

I started Sunshine Islands the way you start pretty much every Harvest Moon game, with nothing but a patch of land and a cheerful disposition. Eventually I got the tools necessary to whip my farm back into shape, and after a day of playing, I had some money in my pocket, a bit of livestock, and some friends in town. I thought I’d made some decent progress. I was clueless. 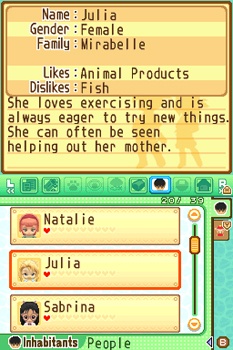 While Sunshine Islands has all the same goals as any other Harvest Moon game, your main objective is to locate the missing sunstones that will raise sunken islands up out of the ocean. Tracking down the first few was easy, but after two solid days of playing, I had only a handful and didn’t seem any closer to finding any more. I couldn’t really progress in the game without raising up the islands, so I turned to a walkthrough for a bit of guidance. What I got instead was proof that I was not worthy.

Harvest Moon walkthroughs – and there are scores of them – go far, far beyond telling you what crops to plant at what time to earn the most money. They do more than simply reveal the secret to getting your cow to give the best milk. They explain, in explicit detail, how you should spend every single minute of every in-game day. How to spend your money. When to visit the town. Which corner of the farm you should be standing in when you activate your teleport stone so that it takes the least number of steps to get to your next destination. Because there’s a lot to do in Harvest Moon and the clock is ticking, always ticking. Those sheep aren’t going to shear themselves, you know, and have you made it to the bottom level of the mine yet? No? You weren’t watching your stamina, were you? What did I tell you about watching your stamina?

It was actually kind of frightening, like walking into a petting zoo only to discover you’ve accidentally signed up for boot camp.

The length and detail of the walkthrough was staggering, and it became clear to me that while I could still putter away in my garden, growing pumpkins and corn, that I was never really going to master this or any other Harvest Moon. Beneath the adorable exterior lurks a strategy game of intricate depth and subtlety, relying on precision timing and singular dedication. To befriend one of the island’s residents to the point that they give you a Sunstone, for example, you must give them five gifts they really like, but you can’t just give them all at once, or it doesn’t count. Unless they’re the head of the household, of course, in which case they’ll also give you one if you’ve already gotten Sunstones from every member of their family. But they have to be inside the house in order for them to give it to you. Nothing in the game actually tells you any of this, mind, you just sort of have to figure it all out on your own.

And that’s one of the easier goals in the game. Don’t even get me started on befriending the monkeys, badgers, and ducks.

I’m actually kind of conflicted about my discovery. On the one hand, it makes me rather happy that such a cute, fluffy game is in fact deceptively intense and serious. On the other, I’m kind of disappointed to learn that I’ll never, ever achieve true Harvest Moon greatness. I’m just too casual of a player.

I’ll keep playing, though, just the same. Those sheep are too adorable to resist.

Susan Arendt always names one of her cows “Steak,” just to be mean.