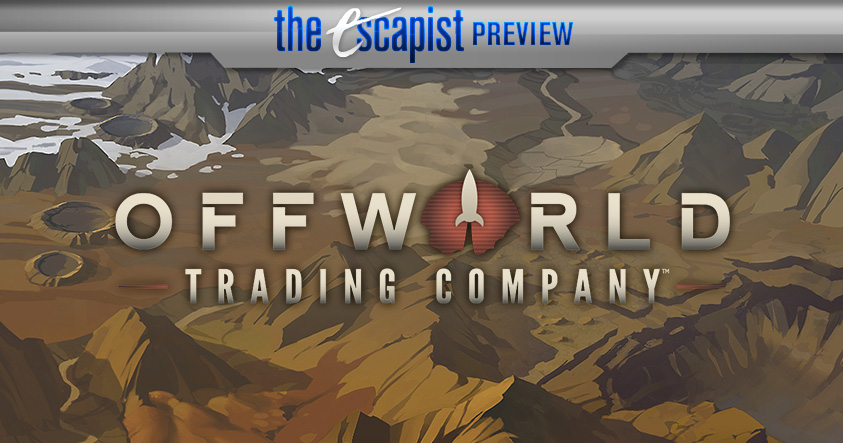 I’ve always enjoyed playing real-time strategy games, but one of the most frustrating aspects can be resource management. Make sure you have enough of this and enough of that so you can buy all the units you need to drive your enemies before you and hear the lamentation of their women.

So when I heard about Offworld Trading Company, Mohawk Games’ attempt at an RTS-like game without the unit building, I was intrigued. Instead of wasting my time building units, I could focus on gathering resources, building my base and then play the market to buy out my enemies. Think Wall Street meets Civilization.

That last part is key, because the head of Mohawk is Soren Johnson, the lead designer on Civilization IV. As a student of strategy, Johnson says he drew his inspiration from the market structure in Age of Empires, which allowed players to play a limited market game, and an old board game called Belter, where you mined asteroids. And of course, there was M.U.L.E.

So OTC was born. And after getting some hands-on time with it, it seems that Johnson and the team have hit on an interesting and competitive formula for success. Think E*Trade on Mars and start buying low and selling high. 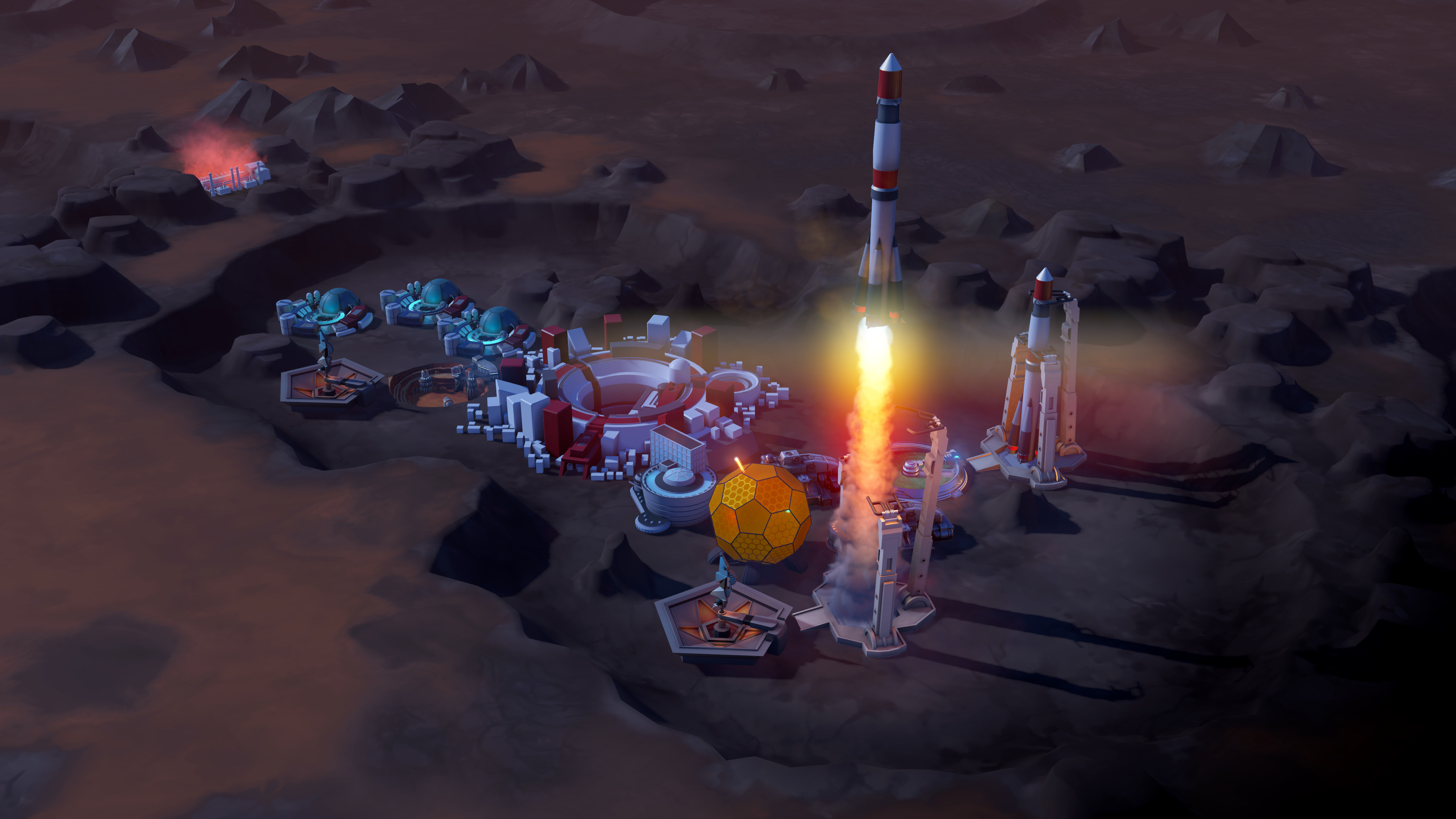 The basics of the game have players scouting spots on Mars for places to build their base. Players can choose from building an Expansive colony (a fairly generic base with extra plots and large footprint), a Robotic Colony (one that requires no food, water or fuel for life support), a Scientific Colony (which allows the building of structures right on resources without mining them first), or a Scavenger Colony (which relies on carbon for expansion instead of steel). Once a colony is built, players can buy plots on which to build mines or excavators for such resources as carbon, iron, aluminum, water and silicon. These resources are then used to create steel, glass, chemicals, electronics, food and other necessities. Running short on supplies? Buy them at a low price. Have an excess? Sell at higher prices to increase your bankroll.

That may sound simplistic, but if you played any Civilization games, you’ll recognize there is also an incredible layer of depth beneath the basics. There are eight levels of difficulty, with lower levels giving less experienced players such perks as more starting cash, extra plots on which to build, a slight handicap to AI players, or extra shares of stock in your own company. Through buying and selling, players use their bank to buy mines, mills and factories to produce resources. One resource that can’t be bought is power, but producing an excess of it goes right into your bank.

As you upgrade your colony, you unlock extra buildings like a patent office, allowing you to patent technologies that can save you money or make extra money for your coffers. You can purchase an upgrade laboratory that will allow you to increase production in 25% increments (up to 100%) on any of your resources. A hacker array will allow you to hack the market and manipulate stock prices up or down. A pleasure dome for workers and colonists gains extra money per turn that goes straight into your account. And the ultimate upgrade is an offworld market that rockets the excess goods of your choice off planet for lots of extra profits. 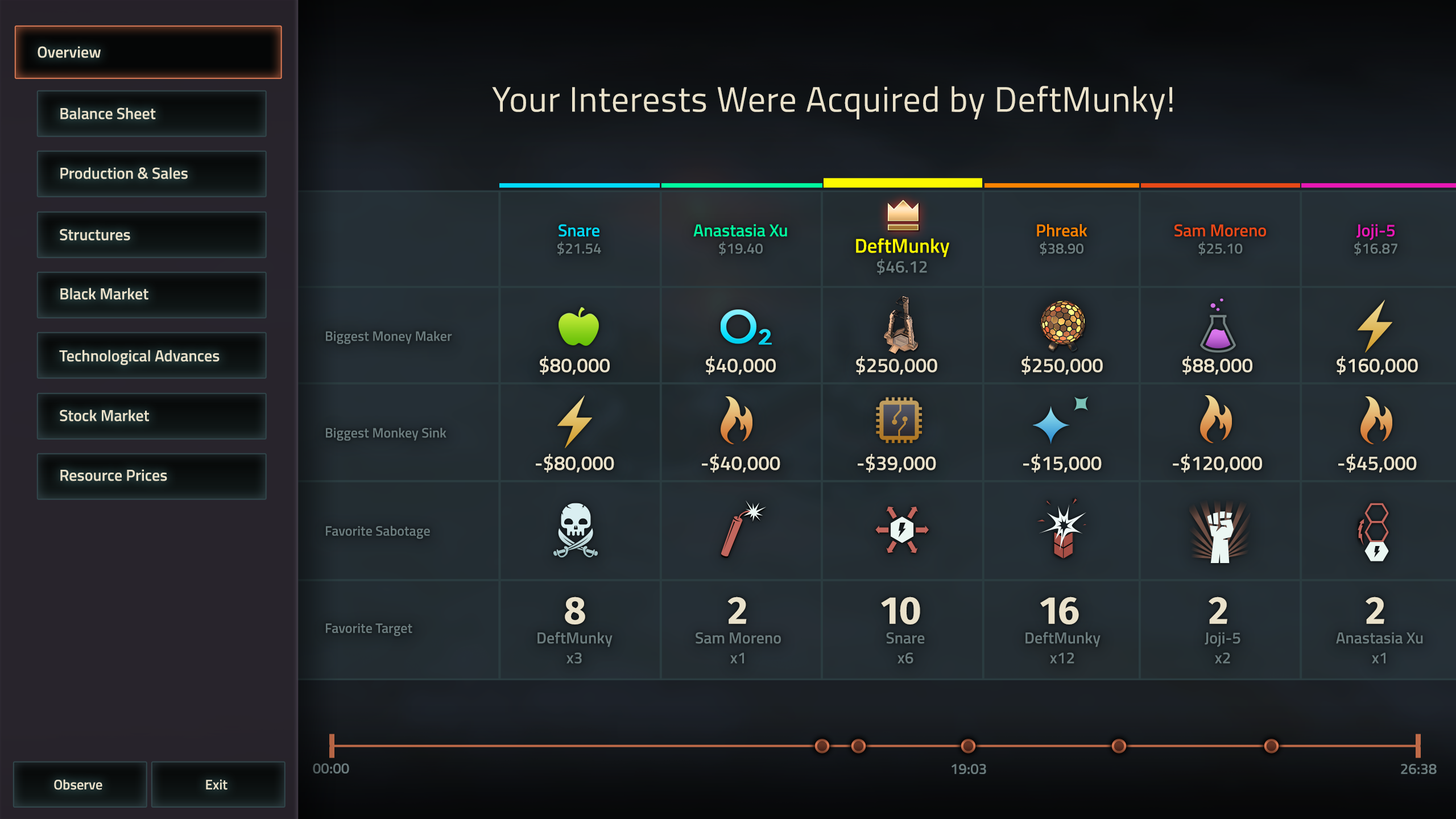 Once the game gets rolling, a Black Market also opens up where players can do such things as buy extra plots, or sabotage players’ buildings and economies through mutinies, strikes, EMP pulses, dynamite, or even hiring pirates to hamper trade routes and steal from freighters.

That may sound like quite a bit to keep track of, but also add in that you are operating a company, one that has shares of stock. If you get too focused on resources, other players can start to buy your stock. If you get careless and let them get more than 50% of your shares, you are bought out and lose the game. The key is to balance expanding your base while buying shares in your company, and even the companies of other players. If you can buy them out, they become subsidiaries and their cash goes into your pocket.

The game has a single-player, multiplayer and campaign component. The campaign plays like a linked series of missions where money earned can be spent on upgrades between missions. Missions have different bonuses that help players through the campaign. “You’ll play tutorials and go through skirmishes first,” Johnson said. “Once the campaign starts, it is a long-form of the game.”

A full playthrough can take up to three hours, but the real fun comes in the skirmish modes against AI players, which has totally randomized maps and resources, but you can face off against up to seven other players as well. Also in skirmish mode, random auctions will pop up and stop play, allowing to you to bid on things like extra plots, Black Market items or even patents.

In multiplayer, which allows 1v1 or four-player FFA, players will play against each other for rankings. There is even a replay mode that will allow you to follow some of the best players to see how they expertly manipulate the market.

There is a special multiplayer mode called the Daily Challenge, similar to what the game Spelunky had. Every 24 hours, players will play the same map with the same options and the same random events, and rank players by how well they do. “We try to make the dailies very divergent,” Johnson said. “We’ve seen it create some weird play styles, but we’ve found it allows better players to optimize play style for the various challenges.”

The game was announced early last year and is in Steam Early Access. Johnson said the game has already sold about 75,000 copies, and they get about a few thousand players throughout the week. Beta 10 is the current iteration, with Mohawk trying to release an update at least once a month. The team is working on some interface tweaks and upgrades for the next release.

Despite being in beta, the game plays extremely well and is incredibly stable. Johnson wouldn’t divulge when the game will come out of Early Access, but it is already an incredibly complete game that had me playing the skirmishes numerous times on different settings. The AI is also very intelligent and will keep you on your toes.

If you’ve ever wanted to try to play the stock market in an alien environment, now’s your chance. Go make Gordon Gekko proud.

This preview was based off the Beta 10 preview of the game, which is available on Steam Early Access. Stardock provided travel and accommodations for the event.