I think Tim Burton was probably the first (and certainly most obvious) exposure for a lot of Generation X and Y moviegoers to the idea of a filmmaker whose signature style infused every element of his films from costumes to music to design. This likely explains why there’s so many people invested in seeing him “return to form” – that is, to say, cast off whatever baggage or issues turned the iconoclast who made Edward Scissorhands and Ed Wood into the force behind empty commercial popcorn-sellers like Alice in Wonderland.

It really is hard to remember that once upon a time, the filmmaker currently sitting pretty on the Walt Disney company’s BFF list first became notable for being dismissed from the studio when his live-action short film Frankenweenie – a takeoff on the Boris Karloff Frankenstein about a monster movie and science obsessed young boy who brings his dog back from the dead – was judged too dark and creepy for the Disney brand (though they did give it a quickie video release years later when Batman turned Burton into a household name).

My, but how times have changed! Not only is Burton back with Disney, he’s been established as a major player in the bloated family blockbuster scene, and the Mouse House has thrown its weight behind a feature-length animated Frankenweenie remake (in some respects an even darker film than the original) as its big Fall Family Event.

The basic story is the same as before: Young Victor Frankenstein is growing up in a bucolic small town resembling early-60s suburban California – because, y’know, Tim Burton – with a passion for inventions and home movies but no real friends save for his dog, Sparky. When Sparky is killed in a tragic accident, Victor makes like his namesake and uses mad science to rebuild and revive him, and then must hide his creation from his family and neighbors with predictably unsuccessful results.

What worked in the original works just as well here. The basic idea of redoing Frankenstein with a kid and his dog, filmed and scored in the style of the original black and white Universal Monsters, is a can’t-miss setup. Burton is always at his best when he has a personal connection to his material, and if you know your Tim Burton movies you know few things sound more quintessentially “him” than stories of strange, misunderstood children escaping into horror fandom and filmmaking. And Ed Wood fans know his style takes to black and white like the Sony Corporation to a bad idea.

The original, however, was a short, so the plot was obviously going to require some expansion in order to fill out a feature. This is where Frankenweenie runs into problems – not big problems, mind you, but problems nonetheless.

The main expansion is the B-story of a science fair being held at Victor’s school, meaning that there are a bevy of other kids working on slapdash mad-science of their own and there’s meant to be an escalating concern about the true extent of Victor’s experiments, but we’re ultimately just marking time and setting things up for a somewhat contrived but undeniably entertaining action-heavy third act. 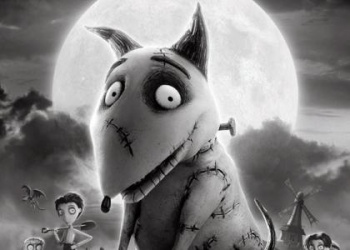 That’s kind of a shame, because for a minute there the film looks like its setting up some unexpected and very welcome depth as a dumb accident sets off a outbreak of science-phobia among the townspeople and the film starts taking some well-deserved and desperately welcome shots at denialist culture. Turning Frankenstein on its head and into a pro-science story? Sign Bob up!

Unfortunately, it’s just one quick segment and doesn’t really come up again in the film. Instead, focus shifts to Victor’s science fair rivals attempting undead-pet experiments of their own that instead unleash a horde of mutants that Victor and Sparky have to battle in the finale. Said battle is exciting, packing a lot of sly references and at least one genuinely scary last-minute nemesis, though it’s a little discordant to be rooting against these creatures (a few of whom meet jarringly violent ends) when the rest of the film is about how justifiably elated Victor is to have Sparky back.

The main issue, though, is that all these extra shenanigans take away focus from what should be the main story of Victor and Sparky. It’s not that the varying reactions of the kid’s classmates to his newfound stature as a master scientist aren’t fun or interesting, but looking into what being given this second chance does to the two main characters seems like it should be a lot weightier than it’s presented here: Victor is the first child in history to negate (through his own actions, no less!) what’s often seen as a sad but necessary rite of passage for growing up; you’d think exploring whether or not that’s a good thing might be something a featuring film with all that extra breathing room would want to try.

The plain fact of the matter is, Tim Burton has never been a sure hand with narrative. He’s a virtuoso stylist and a master of mood, and you can feel the tangible extra effort going into the work when some aspect of it lights up one of his specific fetishes (a major supporting character bears an unsurprising resemblance to the late Vincent Price), but he’s never been able to paint his way out of a problematic script.

Like most of the other better Tim Burton movies, Frankenweenie is mostly interesting separate beats held together by a good enough story. I was entertained by it, would even recommend it, and I can definitely seeing it becoming a personal favorite of young kids of Victor’s relative age and disposition, but I don’t think it’s any kind of New Classic. As for whether or not this being the most Tim Burton-y Tim Burton movie in a while means he’s getting back to form? I can’t even begin to guess. Like it or not, not everything lasts, and if Burton’s supposed golden age has passed it might be something not even a bolt of lightning can revive.