Straight to the point, then: This week’s Escape to the Movies is the remake of A Nightmare on Elm Street, the release of which is going to have a lot of you going back to revisit the original series. Well, if it helps, I already did! Let’s take a look:

It’s probably unnecessary, but just so we’re all on the same page: The teenaged residents of a peaceful suburb in fictional Springwood, Ohio are plagued by nightmares, which they soon discover all share a similar trait – a ghoulish figure with horribly burned skin and a glove with long razored fingers. Investigating the sleep-related death of a friend leads Nancy Thompson (Heather Langenkamp) to the shocking truth that the man in their dreams is Freddy Krueger, a child murderer who had been burned alive in an act of vigilante justice by the parents of the Elm Street Children a decade earlier.

Today, with the series having gone on so long and fallen so far, it’s still hard to believe just how well this original film works. The central premise of haunted dreams is fascinating, the story is well executed, and in its best moments it all plays out in the manner of a really good Stephen King yarn, capturing the very real alienation of 1980s teens who suspected their parents were keeping secrets and/or dismissing their concerns. Writer/director Wes Craven had made some interesting, memorable films in the past, but this is the one that really brought it all together. And, of course, there’s Freddy himself, probably the greatest iconic horror villain of the 1980s, played by Robert Englund with all the sadistic cruelty one would expect from a creature with his backstory.

Watching it again, it’s striking how much is done with so little. The effects are used sparingly, there are no flashbacks and Freddy’s penchant for tormenting his victims manifests more as lethal bullying than the gleeful wisecracks that came later. If you can just overlook the tacked-on “gotcha” ending that not even the folks involved were all that fond of, it’s a near-perfect teen horror flick.

The first Nightmare was a monster-sized box office hit, turning Freddy into a pop culture sensation and raking in profits for fledgling New Line Cinema … and then this sequel nearly brought it all to an end.

Craven refused to involve himself, never wanting the film to become a franchise, and the hurriedly-made result is a complete mess. We’re informed that original heroine Nancy went mad and killed herself, and that our new (male) hero has moved into her house five years later. The fact that the series hadn’t really figured out what Freddy Krueger actually was yet is glaringly apparent right away: He’s now a ghost haunting Nancy’s house, and he possesses our hero in order to have him commit murders while sleepwalking. 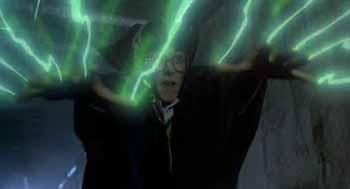 Of course, today what makes the (roundly despised) sequel infamous is its troubling subtext, which appears to use Freddy – who is, remember, a sicko child-killer – as a metaphor for homosexuality. The lead character is uneasy around his ostensible girlfriend, dances flamboyantly (and secretly) in his room, confides his worries in a strapping pal from gym class and draws the attention of a coach who frequents a local Leather Bar. His transformations into Freddy are mostly timed to instances of sexual frustration, and twice occur in situations that would appear to place him in compromising positions with male victims – as though Freddy is the manifestation of a gay side from which he must ultimately be saved by his girlfriend. Yikes.

Whether it was the creepy homophobia or just the bad filmmaking, fans hated the result, and while the series went on, Freddy’s Revenge was immediately scrubbed from continuity.

#3 pretends that #2 didn’t happen, and that’s not the only way in which it’s something of a paradox: While it’s unquestionably the film that “saved” the franchise, it ultimately sowed the seeds that would soon make it impossible for the series to even be taken seriously again.

Her offscreen “death” from Part 2 erased, Heather Langenkamp returns as Nancy – now a doctor specializing in dream psychology “protected” from Freddy by a dream-skipping medication called Hypnocil (which will be important later) – insinuates herself into a mental hospital to help a group of troubled teens who’re having sleep trouble of the razor-fingered variety. Upon discovering that one of the kids possesses psychic abilities, the group forms a plan to enter Freddy’s realm on their own terms – using the superpowers (really) of their idealized fantasy-selves to defeat him once and for all. There’s also intrigue involving a spectral Nun who holds information about Freddy’s past as “the bastard son of a hundred maniacs,” and a hunt for the whereabouts of Freddy’s remains. (It’s here that Freddy starts to become “overpowered,” with a new wrinkle about needing to rebury him in Holy Ground making him seem more like a vampire or demon than mere vengeful ghost.)

This is also the one where Freddy becomes the broader caricature he’s today better known as, tossing out ironic jokes at the climax of each murder, but Englund still manages to make the role function. The rest of the film is the same way: Everything about it from the screaming Dokken theme song to the kids’ using dreamed-up powers (including D&D-style wizardry, martial arts and super strength) to Freddy’s kills now being elaborate special effects showpieces should suck and indeed sucked in the later sequels, but it all kind of works here.

In the 80s and early 90s, anthology TV shows came back in a big way, mostly for horror. Nightmares attempted to capitalize on this, with Freddy as the host, introducing the individual stories. He also starred in a couple, but the only important one was the series’ pilot “No More Mr. Nice Guy,” which belatedly gave us an onscreen depiction of Freddy’s pre-Nightmare origin story. For completionists only.

Dream Warriors was intended to – and should’ve been – the climax of the series, but it was too big a hit and so we got this uninspired follow-up in the now-standard formula: Elaborate FX sequence deaths punctuated by so-bad-its-bad standup comedy from Freddy.

Anyway, Freddy returns to polish off the survivors of Warriors, the sticks around to battle Alice – aka “Replacement Nancy” – who becomes a kind of anti-Freddy superheroine by absorbing the special abilities of his victims. This leads to one of the all-time great gore scenes of the series – Freddy is torn apart by the souls housed in his own body – but it’s a long, dull slog to get there. 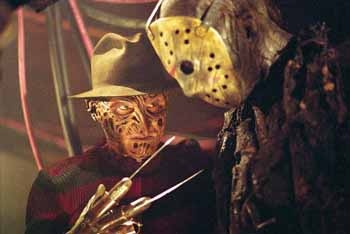 You can almost hear the pitch forming: “Hey guys! I read that fetuses actually dream in the womb! Quick! Let’s make another Freddy movie!” This is basically the last two movies again, with renewed emphasis on Freddy’s “bastard son of 100 maniacs” conception and a save-the-baby ticking clock. You know you’ve made a bad movie when Demonic Toys does the same plot better three years later.

With the franchise on the wane, New Line Cinema plotted to send Freddy out with a bang – at one point even ordering up a script from then-rising cult horror icon Peter Jackson – but internal complications and a distinct lack of give-a-damn got us a whimper instead. Dead is generally considered the worst of the franchise after #2. Videogamers may recall this as the one where Freddy kills a guy with an NES: “Hey! You forgot the POWER GLOVE!”

Another crew of would-be Dream Warriors are on the hunt for Freddy’s previously unknown child, who is presumed to be the last son of Springwood left alive now that Freddy has successfully wiped out all the children but is – for some reason – prevented from operating anywhere else. New plot elements concerning Freddy’s own violent childhood and the revelation that he gets his special powers from a group of ancient Dream Demons are brought in to make him even more overpowered, but ultimately all it takes is a pipe bomb to put him down for good … kinda.

Betcha thought I’d forget this one, huh? 80s slasher fans had been joking-about-but-secretly-hoping-for a “Freddy vs. Jason” and when New Line acquired the rights from Paramount to make Mr. Vorhees’ ninth film they set about making it happen. Fans who got all the way through one of the all-time worst Jason movies (and that’s saying something!) were treated to a pretty epic tease: Freddy’s signature glove bursts out of the earth and drags Jason’s mask down to hell, signaling that the crossover was imminent, but thanks to the lukewarm boxoffice of this film, it wasn’t.

Believe it or not, this was Wes Craven’s original pitch for the third movie. Set in the real world on the set of a new Nightmare movie, the films’ actors (including returning star Heather Langenkamp) discover that Craven had used the power of storytelling to trap an ancient demon in his Freddy movies, but now the demon – who now likes being Freddy – is breaking into the real world.

Well, I’ve heard of worse ideas for spin-offs. You can’t say it’s not an original angle … sadly, you can’t say it’s good either. Everyone is making an effort, and it’s the closest to genuinely scary Freddy had been in years – but it’s all too little too late. The ship, clearly, had sailed. The proposed “regular continuity” battle with Jason even stalled, with both franchises going dormant for almost a decade.

In 2002, the release of Jason X – aka Jason Goes to Space – kicked 80s slashers back into the public consciousness, and probably got this production finally out of development hell.

Presumably ignoring the “every kid is dead” business from Freddy’s Dead, the parents of Springwood have managed to neuter Freddy’s power by institutionalizing everyone with bad dreams and putting the entire population on Hypnocil – the dream-blocking drug from Dream Warriors, remember? So Freddy takes possession of Jason Vorhees to do his killing for him – which works out about as well as every other attempt to control Jason tried so far.

It’s a profoundly silly movie, with Freddy talking to the camera and a promised battle royale that plays out in operatic Hong Kong mega-style – courtesy of director Ronny Yu – over the entire second half of the film. But it’s pretty damn close to perfect at being what it is, with great kills and some visual fun at the expense of Freddy and Jason’s water/fire abused/abuser dichotomy. This was the end of the line for the original continuity of both characters, who’d be resurrected in remakes from Platinum Dunes a few years later.

Six Days in Fallujah Could Be First In a Series